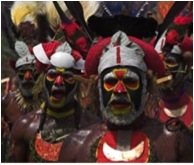 Condolences on the passing of Fr. John Lamani, founder and publisher of the Solomon Star daily newspaper.

On the eve of PNG’s 37th anniversary of independence, PM Peter O’Neill announced a broad range of legislative reforms, including reviewing the constitutional provisions governing the election of the prime minister and term of government. With over 100 election petitions, it is notable that O’Neill also plans to repeal the controversial Judicial Conduct Act that was enacted during his political standoff with Sir Michael Somare, and effectively gave the government the power to suspend senior judges.

Also in PNG, the Commission of Inquiry into the sinking of the MV Rabaul Queen released its report, concluding that the vessel should never have departed on its fatal final voyage. The report was highly critical of the National Maritime Safety Authority, and deputy PM Leo Dion accepted the commission’s 34 recommendations to improve safety at sea.

PM Peter O’Neill was in Vladivostok for the APEC summit and met with Russian President Vladimir Putin. Russia is keen to strengthen the bilateral relationship as it seeks to extend its sphere of influence in the Pacific. A Papua New Guinea delegation also visited China last week to strengthen cooperation and to finalise arrangements for a loan to finance the rehabilitation of the Highlands Highway.

After attending the Pacific Islands Forum in the Cook Islands, US Secretary of State Hilary Clinton urged Indonesia to resolve the simmering West Papua situation, following which the Indonesian House of Representatives established working committees to improve relations with indigenous Papuans. Clinton also visited Timor Leste to bolster confidence in the government and take stock of Chinese aid and investment there. While at the Forum, Clinton declared the Pacific was big enough for both China and the US, but following her trip to Beijing the Economist reports how the rivalry between the two super powers has been recently played out in the region.

As a senior Chinese delegation prepares to visit Suva, Fiji has informed its neighbours that it will withdraw from the Pacific ACP if the Pacific Islands Forum Secretariat continues to deny its participation in the regional grouping. Such a move may impact regional trade deals and integration initiatives. Sparks flew during a recent event in which Fijian media figures alternately asserted and denied that self-censorship continues in the nation’s media outlets.  The conflict in Afghanistan claimed another Fijian, the tenth Fijian soldier in the British Army to have lost his life in the war and the third this year, as a UK charity slams the treatment of Fiji’s ex-soldiers.

Corrupt land deals in Vanuatu continue to be a cause for concern as the caretaker lands minister seems to have unilaterally given the go-ahead to sell public land at 50 per cent of the premium to staff in the department.

In Tonga, the country’s Attorney-General Neil Adsett remains defiant over the US$50 million loan from the Exim Bank of China to rebuild Nuku’alofa after the 2006 riots labelling some of the conclusions of the parliamentary select committee’s scathing report as more political than factual.

Pacific countries should now have until 2016 to conclude Economic Partnership Agreements (EPAs) with the European Union in what is being hailed as a victory for the African, Caribbean and Pacific group of countries. So far only Fiji and PNG have signed interim EPAs in order to protect market access for sugar and tuna. The deadline for the agreements to be concluded was previously 2014, after which duty-and-quota-free access to the EU would be lost.

Kiribati has allowed the Spanish tuna fleet to continue fishing even though its Fisheries Partnership Agreement with the European Union has yet to be completed. The Parties to the Nauru Agreement (PNA), an eight member alliance (Federated States of Micronesia, Kiribati, Marshall Islands, Nauru, Palau, Papua New Guinea, Solomon Islands and Tuvalu) that controls the world’s largest tuna fishery has warned the European Union that it will be fined if regional fishing rules are broken through bilateral deals. A key issue highlighted by an evaluation of the EU-Kiribati agreement is payments for access based on catch tonnage, whilst the Kiribati policy, in line with the PNA protocol is now to provide access based on vessel days.

A new study by the Asian Development Bank concludes that reforming state-owned enterprises in PNG will result in significant economic benefits. The study compared public enterprises in PNG to five other Pacific countries (Fiji, Marshall Islands, Samoa, Solomon Islands, and Tonga) and is the first benchmarking study of its kind in PNG. While SOEs have generally been profitable, the cost to society is often high due to a range of subsidies, for example the cost of capital for SOEs over 2002-2009 was 4.5 per cent, compared with an average commercial rate of 11.4 per cent.