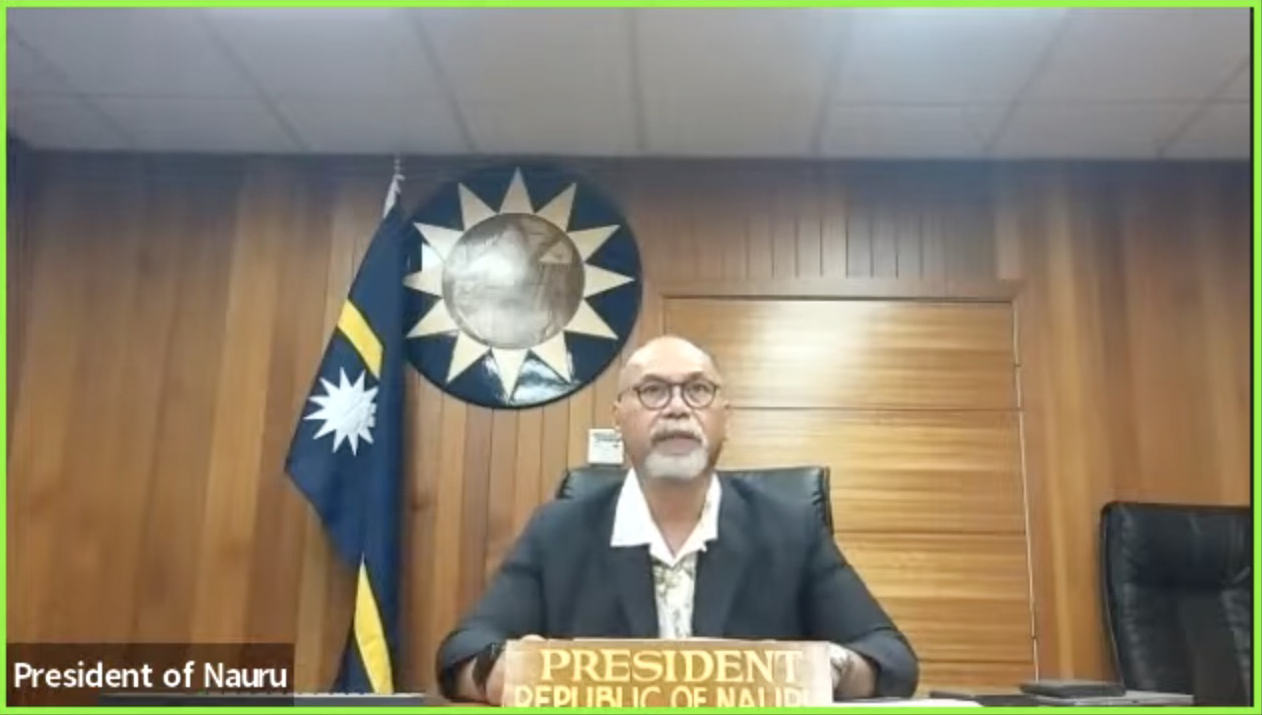 President of Nauru, Lionel Rouwen Aingimea, speaking at the 2022 Pacific Update on 28 June

The Pacific is not a geostrategic chessboard

A very good morning to you all. It is indeed an honour to be present amongst you this morning for the opening of the 2022 Pacific Update.

I sincerely wanted to be there in person but due to our COVID community outbreak, I decided to come back home and be here during this time.

Universities play a vital role in developing research skills, networking and immersing the next generation of policy practitioners in the challenges and opportunities the Pacific region faces. I would like to thank The Australian National University (ANU) and The University of the South Pacific (USP) for co-hosting this great initiative and bringing us together to share such a platform. Indeed, as a former Chancellor, an academic and an alumnus of USP, I am deeply honoured to be invited to make these remarks today.

This Pacific Update is of particular importance to our region. There is a great need for harmonised national and regional responses as our economies navigate both a COVID-19 and post COVID-19 world, often simultaneously. This is particularly important as our political and economic relation with the world grows at an unprecedented rate.

In Nauru, we have been extremely fortunate that we have been spared the early ravages of the COVID pandemic. This required careful planning and intense measures to ensure the safety of our people. Nauru has a unique ecosystem and we have a history of facing disease and pestilence from outside affecting our very way of life. The Second World War was a prescient reminder of our vulnerabilities. Consequently, we developed early intervention policies and sought to ensure that we have almost universal vaccination rates amongst our adult population. In addition, we are working hard to rapidly ensure our paediatric vaccination program is rolled out. We were aware that it is virtually impossible to live in a sealed bubble and that at some time we would face community transmission.

We have learnt the lessons of our neighbours as well as paid heed to WHO protocols. Together, I am confident that these various interventions will allow our people to face this once in a hundred-year pandemic. Taking decisive actions such as restricting movements and carrying out lockdowns are crucial to our very future. We can now only pray that the people of Nauru will be spared the horrific outcomes that people in many countries faced before the development of vaccinations.

Over the next few days, you will bear witness to deliberations on economic, social, political and environmental issues of our region. The importance and need for having well developed national and regional policies is vital for the Pacific region now. All stakeholders have a role in designing, developing and implementing effective policy.

There are unprecedented uncertainties affecting global markets as a result of the pandemic with potential capital leakages occurring that go well beyond what we have witnessed in past crises. As the world returns to some degree of normalcy, albeit that we are all at different cycles of the pandemic, no doubt new opportunities will be created. The need for transparency and stringent financial policies by Pacific Island Countries now is significantly high. It is more urgent than ever to take advantage of these opportunities and expand our economic commitment for a strong, stable and successful region that enables our economies to grow and our people to prosper. Let me address a few key issues that are critical to our future and that require urgent attention.

Whilst COVID-19 remains of critical concern, we must not lose focus on pursuing solutions to existing regional matters. Our development aspirations have been set aside temporarily due to the COVID pandemic. At the same time, the Pacific has become an increasingly sought-after strategic space, raising concerns about security in our region. In addition, climate change remains our greatest existential threat. Quite recently, the growing geopolitical tensions in the Pacific are testing our relationships with each other and with our development partners, beckoning for us to find amicable solutions and ways forward.

During the Cold War between the United States and the Soviet Union, the brunt of the conflict and its worst effects were felt in Asia. In our region, at all cost, we must avoid being the fodder of other people’s battles. We must not be the arena where proxy battles between superpowers are fought.

Since late March this year, there has been an intensified interest in our region with the announcement, initially, of a policing agreement between China and the Solomon Islands and then of a broader security agreement that was eventually signed in April. Much has been made of this security arrangement including whether China was poised to build a base in the Solomon Islands. In the lead up to the Australian election, the security of the region became predominant with the Sino-Solomon Islands agreement seen by some as a failure of Australian foreign policy. What was forgotten amongst the hype were some critical facts. That is, Australia has a similar agreement with the Solomons and that China has for several years had a security agreement with Fiji. Indeed, when that was signed the possibility of a base was raised with the attendant challenges that it would pose to regional security.

The security agreement and a plethora of activity that has since ensued – including high level Chinese delegations visiting several Pacific Island nations, as well as visits from the Australian foreign minister only days after the new Government was sworn in, as well as major figures of the US administration – have all added to the speculation of spheres of influence and the strategic geopolitical importance of the Pacific region. I will leave it to the security specialists to dissect and discern the security implications of the various agreements and the significance of these high-level meetings.

What is crucial for us is that we do not become engulfed in other people’s strategic machinations. In Nauru, our history provides us a prescient reminder that such interventions have meant that we are still recovering from the Second World War and the ravages of colonialism. It is vital that the Pacific is not viewed as a geostrategic chessboard because such activity has real consequences for our people. We have to remain focused on delivering and promoting development that empowers our people and makes our region stronger. As a region we need reliable partners that respect us and work with us, recognising our unique cultures.

I want to also address the issue of Micronesia’s withdrawal out of the Pacific Islands Forum (PIF). I am pleased to say that an agreement has been reached but awaiting signature by the other PIF countries which seems in my opinion hesitant in coming. Part of the reform includes the rotational system of the Secretary General’s position. Micronesian countries in the north Pacific are at the interface of many spheres of influence. We are generally lowly populated with unique climate and development-related challenges that makes us extremely vulnerable. At the same time, our Micronesian unity and collective resolve makes us highly resilient. Our demands for a Micronesian Secretary General are not only about respecting Pacific principles and values, but also about ensuring that our voices and concerns are adequately reflected in the regional body that is so vital to our future. We await the formal signing of the agreement by the end of this month. Extending the Micronesian solidarity into a broader regional forum has never been as important as it is now, but such solidarity demands respect, integrity and an adherence to agreements that reflect the entire Pacific region.

This is an edited version of the first sections of the opening address given at the 2022 Pacific Update by His Excellency Lionel Rouwen Aingimea, President of Nauru.