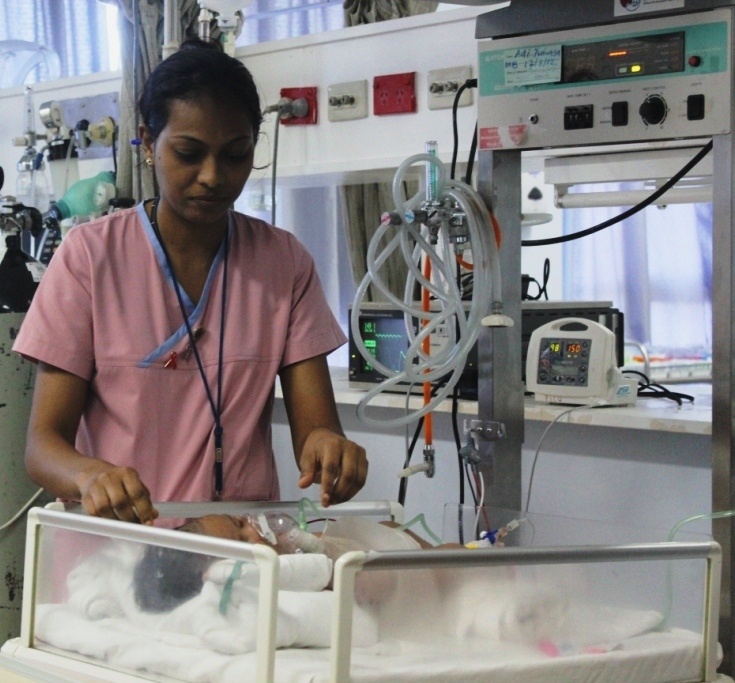 Health care and social assistance is the most common employment industry for women in Australia’s Pacific Islander communities (Flickr/DFAT CC BY 2.0)

By Beth Orton and Ryan Edwards

One comment that attracted our attention was the attribution of migration pathways and pressure to send remittances to family in Pacific island countries as contributors to a lack of social mobility. Through our research we seek to better understand how migration pathways determine the ability of migrants and subsequent generations to thrive through employment across a range of occupations and industries.

Looking at employment for this population aged 15 and over, 42 per cent were employed full time. For men, the share was 53 per cent and for women 33 per cent. Of those not in work, around 30 per cent were not in the labour force (not looking for work). The shares were 36 per cent for women and 24 per cent for men. When comparing these labour force participation rates with Australia’s overall resident population, the proportion of the Pacific Islander population in full-time employment was higher for both men and women.

The main pathway for Pacific Islanders migrating to Australia is via New Zealand, with a much smaller number migrating directly from Pacific island countries through Australia’s skilled migration program. These higher labour force participation rates are consistent with the fact that migrants are often, but not always, a positively selected group. 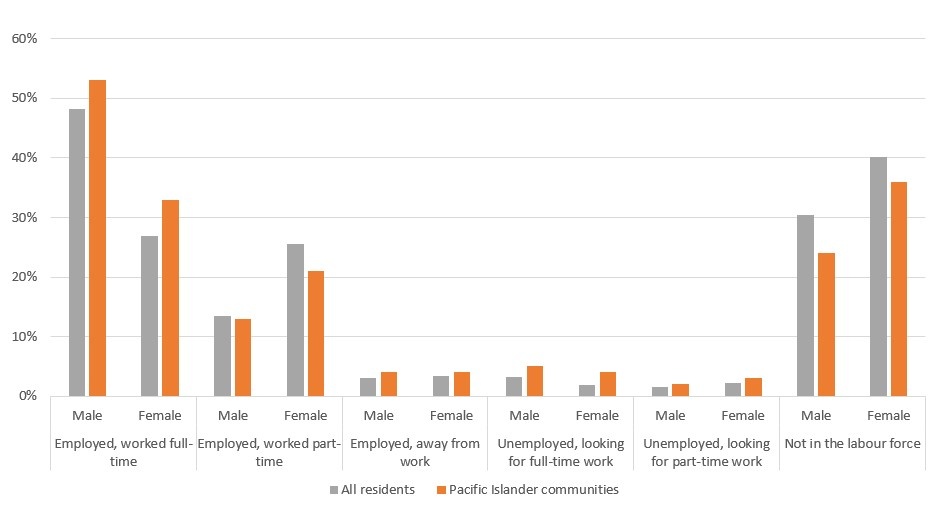 The highest level of educational attainment for almost half (48%) of Australia’s Pacific Islander community is senior high school. Around 45% have some form of postsecondary qualifications, 37% of which are university-based. By comparison, the proportion of the overall Australian population whose highest level of educational attainment is senior high school is 37%, and 54% have some form of post-secondary qualifications.

The sectoral and occupational patterns line up with what might be expected with this education profile. The most common industry of employment was health care and social assistance, accounting for 15% of respondents. Second was manufacturing, at 11%. The median income, before any deductions, was $800—$999 per week ($41,600—$51,999 per year), significantly above the median weekly personal income for all Australians in 2016 at $662.

Like employment status, the sectoral distribution of employment was highly gendered. The most common sectors for men were construction (14%), manufacturing (14%), and transport and warehousing (13%). The most common occupations for men were machinery operators and drivers (23%), labourers (19%), and technicians and trades workers (17%). 13% of men were professionals and 9% managers. 16% reported working more than 49 hours per week. For men aged between 15 and 29 years old, 49% were labourers or machinery operators and drivers: younger Pacific Islander male population were predominantly in lower skilled occupations.

The most common sectors for women were health care and social assistance (26%), retail (10%), education and training (9%), and accommodation and food services (8%). The most common occupations for women were clerical and administration (23%), professionals (20%), and community and personal service workers (20%). 13% were labourers. Median incomes were $500—649 per week ($26,000-$33,799 per year), reflecting the fact that women were almost twice as likely as men to work part time. The top three occupations for women aged 15 to 29 were spread equally (around 20% for each) across community and personal service workers, clerical and administrative workers, and sales workers – occupations incorporating a broad range of skill levels.

In terms of pressure to send remittances, one natural question to think about right now is how COVID-19 is affecting incomes within Pacific Islander communities in Australia, and any potential flow-on impacts to Pacific island countries. Clearly, Pacific Islanders in Australia work in sectors heavily affected by COVID-19. While many households may have less disposable income now, this does not necessarily mean a fall in remittances: being aware of the current economic situation in Pacific island countries and typically having higher incomes than their extended families abroad, households could be increasing or at least keeping constant their remittance levels, as appears to be the case for Fiji. It will be interesting to clarify the true direction and magnitude of these flows as more data come in.

In summary, Pacific Islanders in Australia are more likely to be at work than the average Australian resident and on average men and women earn above the median income. The results of this analysis are not inconsistent with the issues reported in the media, but they do represent a broader perspective of labour force participation within the Pacific Islander population.