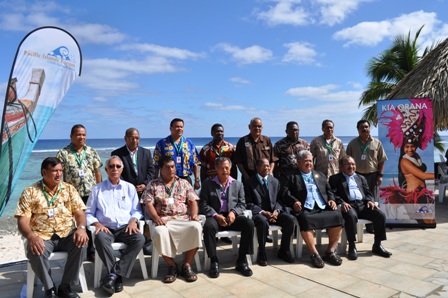 In August of this year, Pacific Island Leaders met in Rarotonga, Cook Islands, for the 43rd Pacific Islands Forum Meeting. Whilst the media seemed incapable of focusing on anything but the implications of the US Secretary of State Hillary Clinton’s flying visit, the members did discuss a range of important issues, some of which have been noted on this blog.

One subject that has seen very little discussion is the ‘Pacific Leaders Gender Equality Declaration’ – annex 1 of the 43rd Communique. Readers could be forgiven for a measure of skepticism about just how committed to gender equality[1] all Pacific leaders actually are. For example, the Forum and individual leaders have made numerous past commitments to improving the status of women, yet after nearly ten years of related assistance to the region, only the most modest of improvements have been achieved. Similarly, we continue to see apathy, a lack of understanding, or outright opposition to improving the status of women by many Pacific leaders (men and women), see examples here, here and here.

However, the Declaration came on the back of a considerable (Australian) financial commitment of AUD $320 million for Pacific gender equality over the next ten years. This suggests a more genuine interest in improving the status of women in the region, particularly on the part of Australia which has been notably supportive of the development needs of Pacific women in 2012. It also makes the approach to improving the status of women set out within the Declaration, very important.

Unsurprisingly, there are both weaknesses and strengths to this approach. I touch on two of these below.

While accepting that the Declaration’s commitment to actions for progressing the status of women were made at the highest political level, the Declaration places a disproportionate emphasis on the use of top-down government policy and legislation, whilst placing almost no emphasis on bottom-up support for civil society. In fact, civil society is mentioned just once.

Improving the status of women requires significant social change, so much so that most developed countries are still struggling with it. To be effective, this change will need to become mainstream across a minimum of three different levels of society (see this model for a more full conceptual explanation): 1) the individual, 2) the community – families, villages, churches etc., 3) government – public institutions, polices and laws. This is why we so often hear about ‘gender mainstreaming’ and gender as a ‘cross-cutting issue’.

Within this context, direct support for civil society (particularly women’s groups), should be given equal priority to that of efforts to reform government policy and legislation. This is for two main reasons. First, government policy and legislative reform (particularly in the Pacific context) has been very slow to change individual and community-held socio-cultural norms relating to the role of women. This is the result of both a wide range of capacity limitations experienced by many Pacific governments, as well as how strongly embedded existing socio-cultural norms are within village and community life – including within community leadership which often parallels and conflicts with government leadership. There are many manifestations of this challenge, e.g. where people do not enforce, ignore or are uninformed of laws and policies etc.

Second, almost without exception, it has historically been civil society that has driven social change (see this on feminism and violence). Government policy and legislative reform is usually a result of this social change, rather than what leads to it. Unfortunately, Pacific civil society not only remains small and often disparate, but there are very few organisations that have a core focus on women’s empowerment, let alone broader gender equality. Those organisations that do have a focus on women rarely have the long-term funding security that would enable them to sustain large-scale social change campaigns (say, continuously working to educate and inform whole communities – including their leaders). As a result, most end up receiving short-term funding for short-term projects that target small groups of individuals within communities, rather than whole communities. A common result being that at the conclusion of a project, many of the individuals supported still struggle to achieve social movement because broader community and village life remains hostile to this movement (regardless of government law and/or policy).

It is therefore disappointing that the Declaration doesn’t more clearly indicate that greater more sustained support for building civil society is part of the plan.

Pacific leaders and donors deliberately focus funds that are earmarked for ‘gender’, on activities that overtly promote women’s political and economic empowerment, and reduce violence against women – e.g. special measures, police force training in violence against women and domestic violence legislative reform. Whilst the Declaration very much follows this trend, it broadens its approach by acknowledging the need to ensure support for ‘reproductive health (including family planning)’ and for ‘gender parity in informal, primary, secondary and tertiary education and training opportunities’. This is critical as these services also play an important role in improving the status of women but are often ignored and often severely under resourced.

For example, there are more than 10,000 Solomon Islands women with an unmet need for family planning. Meeting this need would likely cost less than 2% of the AUD $320m between now and 2025, and lead to immediate life improvements. These can include: more girls going to school and staying in school, fewer maternal and infant deaths, and healthier more productive women. When family planning is included as part of education programmes for men and boys, it can also play a role in reducing sexual and gender based violence between couples. These outcomes are all closely linked to improving the status of women, yet there are more than 370,000 women across the Pacific with an unmet need for family planning. Comparatively, whilst enabling women to gain seats in the Solomon Islands legislature is very important, it will likely take much longer to translate into broad social change for the thousands of women still living on or below the poverty line.

By including specific commitments to health and education services, the Declaration, importantly, creates greater space for donors and leaders to broaden their approach to improving the status of women in the Pacific.

Ultimately, the Pacific Leader’s endorsement of the Declaration should be commended and is a positive indicator of increasing support for gender action in the region. Coupled with Australia’s investment, the Declaration presents the region with an important opportunity to enable much needed action towards improving the status of women. Nonetheless, fully maximising this opportunity will likely depend on how effectively individual Pacific Island Countries – supported by their partners – build on the current approach’s strengths and amend its weaknesses. Hopefully this process will reflect the need for a more diverse range of interventions that truly cut across all levels of society.

[1] It is worth noting that the definitions of gender equality used by most multilateral agencies including donors, are based on a binary notion of ‘men’ and ‘women’. They therefore, disappointingly, exclude all other genders including: lesbian, gay, bisexual, transgender, as well as others unique to the Pacific like fa’afafine and fakaleite. For this reason, this post predominantly refers to the purpose of the declaration as advancing the status of women, not gender equality (perhaps a discussion for a future post).