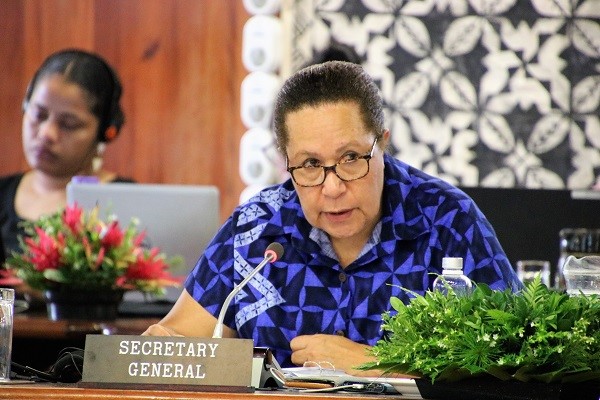 The advent of vaccines will have a significant effect, and they are already being rolled out in some countries. Both Australia and New Zealand have undertaken to assist with the purchase of vaccinations for Pacific island countries. However, there still appears to be work to do around the logistics of vaccinating entire populations, especially in the larger countries such as Solomon Islands and Papua New Guinea.

When it comes to ‘travel bubbles’, labour mobility from various Pacific countries to Australia and New Zealand has resumed. This is likely to be as far as this will go until at least the middle of the year. The Fiji tourism sector will continue to push for a travel bubble with Australia, but it is hard to see how that can progress in the immediate to short term, given continuing outbreaks in Australian cities and states.

During 2021, there will be national elections in Federated States of Micronesia (March), Samoa (April) and Tonga (November).

The political situation in Tonga has been fraught for some time. The death in 2019 of ‘Akilisi Pohiva saw Pohiva Tu’i’onetoa take on the leadership. Since then, there appears to have been increased polarisation between those who favour a more fully articulated democratic system and those who would like to retain and possibly increase the sway of the monarchy and noble class. Just this week a motion of no confidence in the PM was defeated in the Legislative Assembly by thirteen votes to nine.

The elections in Samoa may prove to be the most significant held in that country for a number of years. Further to a number of controversial new laws and constitutional amendments governing the settling of land disputes, Prime Minister Tuilaepa Lupesoliai Sailele Malielegaoi faces a real challenge to his hold on power. At the forefront is his erstwhile deputy, Fiame Naomi Mata’afa. She resigned from the cabinet and Tuilaepa’s party late last year. Whilst she is currently sitting as an independent, it is expected that she will join the newly established Faatuatua ie Alua Samoa ua Tasi (FAST) party, once Parliament is dissolved later this month. If Tuilaepa loses the Prime Ministership, it will bring to an end one of the longest tenures in the region. He has been PM of Samoa since 1998.

Meanwhile in Papua New Guinea, James Marape may find himself facing another vote of no confidence when Parliament resumes in April. This will be the last such opportunity before the next grace period commences ahead of the 2022 elections.

As we saw on numerous occasions during 2020, the leaders of the Pacific islands region remain very clear that the primary challenge they face is addressing the impacts of climate change. Whilst the impacts of the COVID-19 pandemic – especially when it comes to their economies – are undeniable, there is understandable concern that the issue of climate change has been downgraded elsewhere in the world. Pacific diplomatic efforts on the global stage to push for greater ambition when it comes to reducing carbon emissions will no doubt accelerate this year ahead of the COP26 meeting, scheduled to be held in Glasgow.

As a co-host of the summit, the United Kingdom has already demonstrated that it sees support for Pacific leadership as a cornerstone of their climate diplomacy and indeed their renewed engagement with the region. Similarly, Pacific voices were given prominence at last year’s Climate Ambition Summit convened by the UN Secretary-General. Given the change in administration in the USA, and the appointment of John Kerry as a Special Presidential Envoy for Climate Change, Pacific negotiators will be expecting additional support from Washington.

Work is progressing to develop a draft of the 2050 Strategy for the Blue Pacific Continent. It is intended that it will be presented to leaders at the 2021 meeting, scheduled to be held in Fiji in the middle of the year. Acting on climate change and achieving net zero carbon emissions will be a cornerstone of this strategy.

Leadership at the Forum Secretariat

Perhaps the biggest hangover from 2020 for the region is who will replace Dame Meg Taylor as Secretary-General of the Pacific Islands Forum (PIF). COVID-19 put paid to the scheduled in-person meeting of the leaders in Vanuatu, and leaders did not meet virtually in the course of the year either.

The prolonged period of obvious division as to which of the five nominated candidates should take over as Secretary-General does not look likely to end before Dame Meg completes her term this month. At the end of last year, we were told that leaders would meet online on 13 January with this as their only agenda item. However, this has not eventuated.

The Pacific Islands Forum has always relied on a consensus method of arriving at decisions and there is understandable reluctance to break with that tradition on this issue. However, the inability of leaders to be able to meet in person, chat quietly, and smooth the way before sitting down to decide is proving a serious impediment.

There is certainly no appetite among the Pacific Islands Forum as a whole for the Micronesian countries to break away, as has been threatened, if their preferred candidate is not accepted in accordance with a ‘gentlemen’s agreement’ that the post should rotate between the sub-regions. Perhaps the only workable compromise is for the Deputy Secretary-General Dr Filimon Manoni (who is a Marshallese citizen) to act as Secretary-General until the leaders can meet in person.

Annual predictions from the author starting in 2012 are collected at #Pacific predictions.