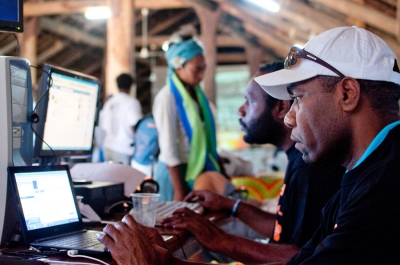 Pacific predictions: some thoughts on what 2012 might hold for our part of the world

As 2012 gets underway, it’s a good time to look ahead and anticipate what some of the key events and issues will be in the Pacific island region during the next twelve months.  This is not an exhaustive list of predictions and no doubt by the time December comes around there will be plenty to reflect on that has not even been mentioned here, but just to get the ball rolling…

There is no such thing as a ‘quiet’ year in Pacific politics and that is certainly not going to be the case in 2012.  The political and constitutional contortions in Papua New Guinea that held everyone spellbound at the end of 2011 are yet to be fully resolved, are unlikely to be until the elections in July and possibly may not be even then.  Elsewhere in Melanesia, Vanuatu is also in an election year with the country going to the polls in November.  Underpinning the minutiae of who’s in, who’s out, who’s (re)aligning with whom continue to be some key issues and debates about the nature of political leadership in these countries and the (possibly) changing relationship between the governed and those who (seek to) govern.

New to the arena is the increasing role of social media as a forum for debate, identifying questions about policy, holding both government and Parliament to account and often rectifying gaps in mainstream media coverage.  There is no denying that for a growing number of people in the Pacific, the Internet is a primary location for debate, political and otherwise, but it remains the case that this space is not available to the majority of Pacific islanders raising appropriate concern that the conversation is kept as accessible and inclusive as possible.

It is expected that 2012 will be another year of uneven growth in the region.  The resource-rich countries, most particularly Timor Leste and Papua New Guinea will continue to grow rapidly.  Elsewhere, growth will be much slower. The ADB projects a 2012 growth rate of 1.5% for the Pacific Island region excluding PNG and Timor Leste. This increases to 6% if these two booming economies are included..

The cautiously welcomed lifting of emergency powers by the interim regime in Fiji on January 7th was a timely reminder of the significance of the situation in Fiji not just as it affects that country but also as it resonates throughout the region.  The Fiji question has proved and will continue to be something of a litmus test at sub-regional and regional levels.  Whilst 2014 (the date set by the interim regime for national elections) may seem some way off, it is to be expected that starting now a number of key legal, political and geo-political decisions will be made that will form part of the pathway towards 2014.

The structures associated with regionalism and sub-regionalism will continue to develop and change during 2012.  The appointment of a new Director General within the Secretariat of the Melanesian Spearhead Group may well lead to a more robust and vocal approach, not least as this group seeks to accommodate the presence and participation of the newly formalised Polynesian Leaders’ Group.  However, what will (hopefully) be the most interesting and significant outcome of these developments will be an impetus within the Pacific Islands Forum to re-engage with its stakeholders and provide vibrant and effective leadership to the region as a whole.

Following the momentous visit of the “Pacific president”, 2012 may reveal more of the what, where and how of the much anticipated re-engagement of the USA with the Asia-Pacific region, although it remains open to question how much of that re-engagement will be with our part of the Pacific.  The ongoing work of the Millennium Challenge Corporation in the region is one aspect that will continue to be watched with interest.  The first compact within the Pacific (road building in Vanuatu) is now closing out and there have been preliminary discussions regarding MCC assistance to Solomon Islands.

The recent high level discussions in Busan confirmed (not that much confirmation was needed) that the BRICS nations (Brazil, Russia, India, China and South Africa) will be seeking to establish geo-political leverage through provision of development assistance (among other things) and it is likely that their activities in that sphere will extend to the Pacific island region in the near future.  This will raise issues of engagement not only for individual Pacific island countries but also for the more established development partners operating in the region, most notably Australia, New Zealand, the USA and the EU.

And speaking of the EU, June 2012 will see Vanuatu host a meeting of EU/ACP leaders.  Having a gathering of this size and type take place in the region provides unprecedented access for Pacific island leaders to key decision-makers and this is an opportunity that needs to be well strategized in order to ensure it is maximized for both short and long term gains.  It is also a chance for the countries of the Pacific to establish key South-South linkages to enhance development activities in a range of areas.

Alongside all of this, some things continue to be with us for the longer term.  Most notable are issues associated with the impact of climate change, (including disaster readiness, climate related migration and food security), the ongoing impacts of the global financial crisis (or should that be crises?), the increasing use of ICT in almost every area of daily life and its impacts (positive and negative) and the role of aid in promoting development in our region.

Whether or not some or all of these predictions prove to be accurate, one thing is certain: life in the Pacific islands may be lots of things, but boring is not one of them.