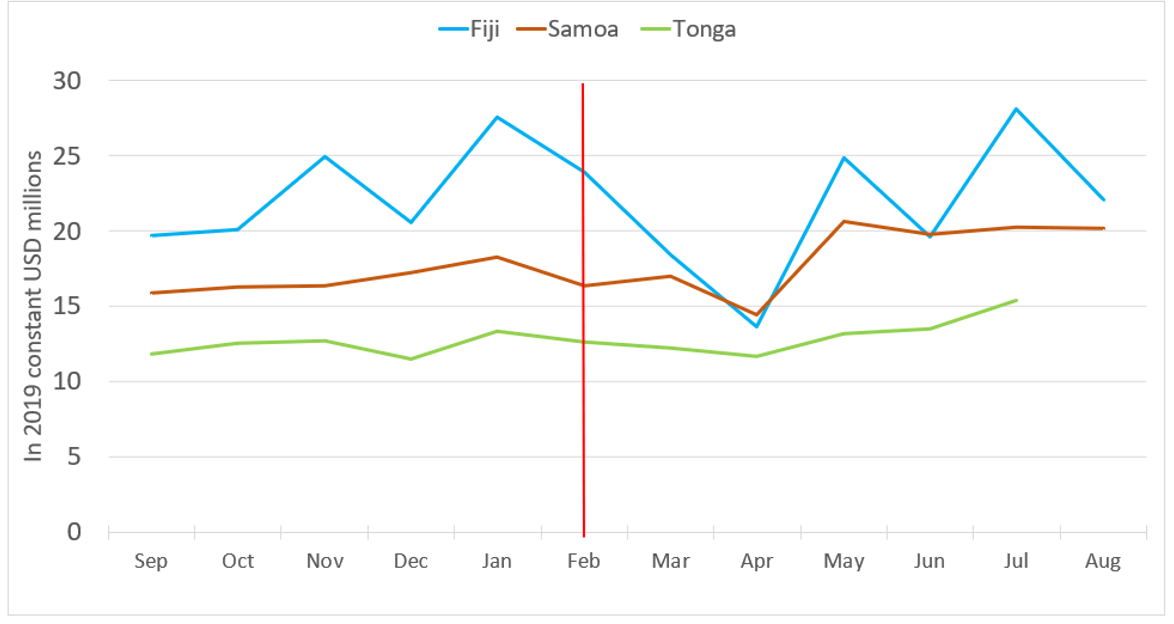 Pacific remittances: holding up despite COVID-19

At the start of the pandemic, it was thought that remittance flows would contract sharply. In April 2020, the World Bank predicted a 19.7% drop in remittances to low- and middle-income countries in 2020.

Remittances are very important for some Pacific countries: they were 5% of GDP for Fiji, 24% for Samoa and 43% for Tonga in 2019. What has happened to remittances in these countries since the pandemic? We try to answer that question in this blog using monthly central bank data.

The data is shown below, adjusted only for inflation, right back to the early 1990s for Samoa and Fiji. You can see the increasing trend that we explored in our earlier blog, but also a lot of volatility. It is not going to be easy to explain short-term remittance movements. 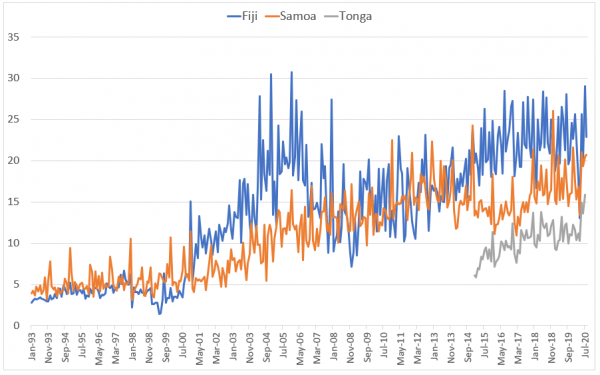 As a first step, we can compare remittances this and last year by month. The most obvious takeaway from Figure 2 is that there is, overall, little difference for the three countries between remittances this year and remittances last. For Fiji, they are well below in March and April (of this year compared to last), but then about equal in May, below again in June and August, and above in July. In Samoa, remittances this year are again below last year’s levels in March and April, but equal or above from May to August. In Tonga, remittances in the two years are similar up to May, and then this year’s are slightly above. From this analysis, one would say there was a dip in remittances in the early months of the pandemic, but certainly no sign of a sustained fall.

Figure 2: Unadjusted remittance trends over the last 24 months (in 2019 constant US$ millions)

One thing that might help is to deseasonalise remittances, that is, remove their seasonal component to reduce the noise-to-signal ratio. The X13 ARIMA-SEATS method is popular, but, to get good results using it, a data set with at least 96 months of observations is recommended. The Fijian and Samoan data sets stretch back to 1993 but Tonga’s starts in January 2015.

A different approach that accommodates the shorter Tongan data set is the straight line method. This involves detrending monthly remittances data, and then deriving the monthly seasonal factor by averaging the residuals of each month from the first step. In the third and final step, the seasonal factor derived for each month is deducted from the original data points to arrive at the seasonally adjusted figures. More details can be found in this paper.

We tried both methods on the Fijian and Samoan data sets, and obtained similar results. For consistency, we applied the straight line method to all three countries.

The results are shown in Figure 3. The advantage of deseasonalising the data is that we no longer need to make same-month comparisons. Having removed monthly fluctuations from the data, we can simply look at the deseasonalised trends.

Figure 3: Seasonally adjusted remittance trends over the last 12 months (in 2019 constant US$ millions) 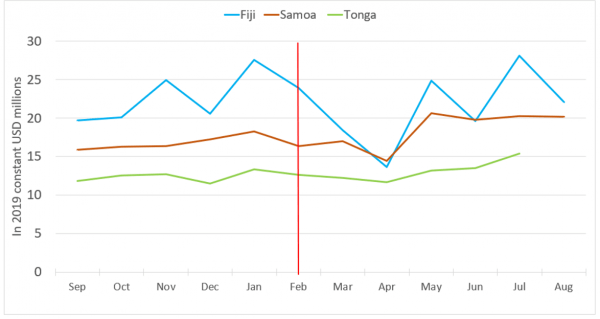 Unfortunately, even after deseasonalising the data, there is still a lot of volatility. Clearly, much of the fluctuation in remittances is non-seasonal. It might be random, or driven by other social and economic forces. Nevertheless, we do see some clear patterns. There is in all three countries an initial fall in remittances in March and April, but recovery thereafter.

In the early months, Fiji was the most affected in terms of inflation-adjusted total remittances, which fell almost 50% between January and April 2020. Samoa’s and Tonga’s remittance levels contracted by 21% and 12%, respectively, during the same period.

After this initial drop, all three countries experienced a rebound in May of this year. Fiji’s May remittances surpassed its February level, almost doubling in just one month from US$13.7 million to US$24.8 million. Samoa’s and Tonga’s remittances registered one-month gains in May of 43% and 13%, respectively.

To wrap up, there is certainly no evidence of remittances falling in the Pacific. In fact, this is consistent with the most recent global evidence. The World Bank now says that, worldwide, “remittances have held steady and in some cases, even gone up”.

It may be that Pacific migrants are sending more at a time of need. It may also  be that migrants have been relatively unaffected by the economic crisis, or, more likely, affected but protected by their host governments.

One major caveat is needed. With borders closed, migrants are unable to visit or return. They therefore are more reliant on formal remittance-sending channels. So, despite these promising results, total rather than recorded remittances may be falling.

While we may never know the true story underlying Pacific (or global) remittances during the pandemic, it is surely reassuring that, predictions to the contrary notwithstanding, we have not in fact seen a decline in recorded remittances to the Pacific.

Note: Data from central banks. The Tongan numbers are different to those reported in our earlier blog, since there we used World Bank data.