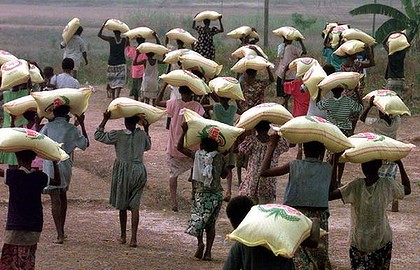 Has the donor world lost the plot? This is a question that most people I know who work in aid often ask themselves privately but few will raise publicly. Are the various contortions that those of us who work on the ground are forced to go through actually making the situation worse for people in developing countries or better?

It is true that the need for development assistance to help the most disadvantaged people is noble, sensible and smart. It is also true that more funds in this area would certainly help more people. But there is a growing concern amongst many practitioners in the field that the those in charge of development at the highest institutional levels have simply lost touch with reality.

Like with the eighties obsession with MBA’s coming in and telling experienced business hands how to run business they knew nothing about nor had any background in – some would argue that the world of development has become bloated with highly qualified dreamers and that as a result the development agenda has lost focus and become hi-jacked by simply following one fad after another.

It is hardly surprising that around the world the tough financial times are asking many Governments Treasuries to question why funds are being placed in development especially when the development agencies themselves seem incapable of providing anything other than pithy statements. I highlight below just some short term fads we have seen here in the Pacific in the past few years.

In the private sector if you mess up you pay, but by the same token you can rebuild. In aid somebody else pays and so there is no learning curve as the wrong person feels the consequences of your failure.

In Government it is usually better to focus on process and not product. This is not to say the end product is not important – it is. But if we accept that the process by which we achieve a good outcome is more important that simply being presented with an outcome then we should not only be targeting outcomes and outputs. This is what the original debate on “governance” was all about – improving process. But somehow we seem to think the Government is about selling something – it is not – it is about delivering a public service and that is very different to selling a product.

In the private sector you sell your outputs – so usually it is measurable, often tangible. You worry about outcome in terms of profitability and return to shareholder. In aid we are adopting this thinking and so there are some who think we should worry more about the return to the tax payer and not the return to recipient. But that is not what development should be about and by pretending to monitor output we move away from the correct mandate which is ultimately to alleviate poverty and not to focussing on getting the greatest possible return to the Australian or New Zealand tax payer.

You cannot quantify the cost per unit of health or education and to do so is simply foolish. You can look at ways to deliver the same service cheaper and better but to do that you need to focus not on dreamed up targets – anybody can make up a random target – look at the MDG’s. But few people seem have the nous to explain why we failed to get there in the first place. Simply setting more pointless targets may seem like a great days work for those in their lovely colour matched, air conditioned offices but it really is quite pointless to those who are perhaps trying to actually help a school in a remote village educate children.

Zero tolerance – a big buzz word in development today. Zero tolerance is a good concept. It means we don’t aim to make errors. But it does not mean that errors will never occur and that any error no matter how small should be seen as indication of disaster. It does mean that there is a process by which errors are identified and action taken resulting, over time, in as few mistakes as possible. It does not mean there will never be any mistakes.

It can take the Australian Government years to deal with complex legal cases of fraud or mismanagement. In the developing world the fact that fraud exists is seen as a reason to begin Salem witch trials against civil servants and insist on parallel systems and lots of ex-patriot consultants to handle the money.

It is rare to see a donor look at what happens after the fraud has been discovered to see if there is a process and patiently wait for that process to occur. It is more normal to assume that any fraud is a sign of bad governance rather than see what the governance process is. Zero tolerance should not mean that there will never be fraud – if that was the case no agency in the Australian or New Zealand or any public body would ever receive funds as fraud happens – it is as simple as that. What matters is the processes in place to deal with it.

Misunderstanding and papering over important issues like gender, disability and climate change. These should not become or be treated as fads.

Climate change, disability and gender are important issues. This does not mean we add a paragraph in every report on gender and disability impacts or make sure that every funding application has the words ‘climate change’ in them. It does mean that we look at these challenges as discreet and work out how best to address them rather than insist everybody be aware of the problem and make pithy statements about them.

Right now we all know that to get funding you need to mention these words – I recently came across people doing a gender impact study on climate change. Not because they knew anything about the subject of gender – they were all climate change specialists – but because it was the only way to secure funds for their research.

This is a tragedy not only for the climate change research as lying is rarely a good idea but also for the gender research as it progresses little. The same is true for areas like disability.  I suspect disabled people don’t want pithy statements in reports that may one day result in ramp to a post office in a developed country with an AusAID badge on it – I suspect they do want to be able to show how they can contribute their skills to the challenges faced in many developing countries. But as long as we treat these issues like fashions – wearing them this season only because you look good by doing so – then we will never really come to grips with these issues.

In aid we never allow spanner monkeys (who are usually grumpy old men and women soured from years in the field) any input into process as we are dominated by “big picture economists” who do not know the mechanics. It’s the difference between getting advice from a kid with an MBA and no practical experience and a seasoned mechanic on how to fix your car. In aid we loved the Masters in Development or PHD kids and discount the mechanics and front line people.

In the private sector you either make a profit and survive or you make a loss and eventually go broke. In Government you can never go broke and there is no little loss from messing up.

As a result the incentive in Government is to cover up your losses – this is why no aid project is ever deemed a failure, this is also why donors almost never learn from their mistakes as they deny making them in the first place and it is also why they also are always chasing the next rainbow – as doing that is more likely to yield extra money than admitting you did something wrong and trying to fix it.

It is hardly surprising that around the world (including Australia) Ministry’s of Finances are questioning the increases in the aid budget. As long as donors continue to respond with fads, dreams and pithy statements you cannot be surprised when the reaction from Governments is to reconsider giving extra money. If aid agencies cannot show direction, understanding of their business, real understanding of the practical things that are needed to address a problem then I am afraid to say that the most likely outcome will be that eventually Governments around the world will renege on their aid funding pledges and they would be right to. It will be a disastrous but inevitable outcome caused by the fact there are few people heading aid agencies these days who know anything about the mechanics of government or poverty or aid. This fact is now painfully evident not just to seasoned “front line process mechanics” like myself but also many others. It is no wonder that public opinion and many civil servants are beginning to rebel against the generally held notion that all development spending is implicitly good.

[1] This may be why many folk in development often dream about and try and behave like benign dictators.

Nik Soni
Nikunj Soni is a Co-Founder and Chair of the Pacific Institute of Public Policy (PiPP). He has held a range of senior positions in the Pacific region and Timor-Leste.