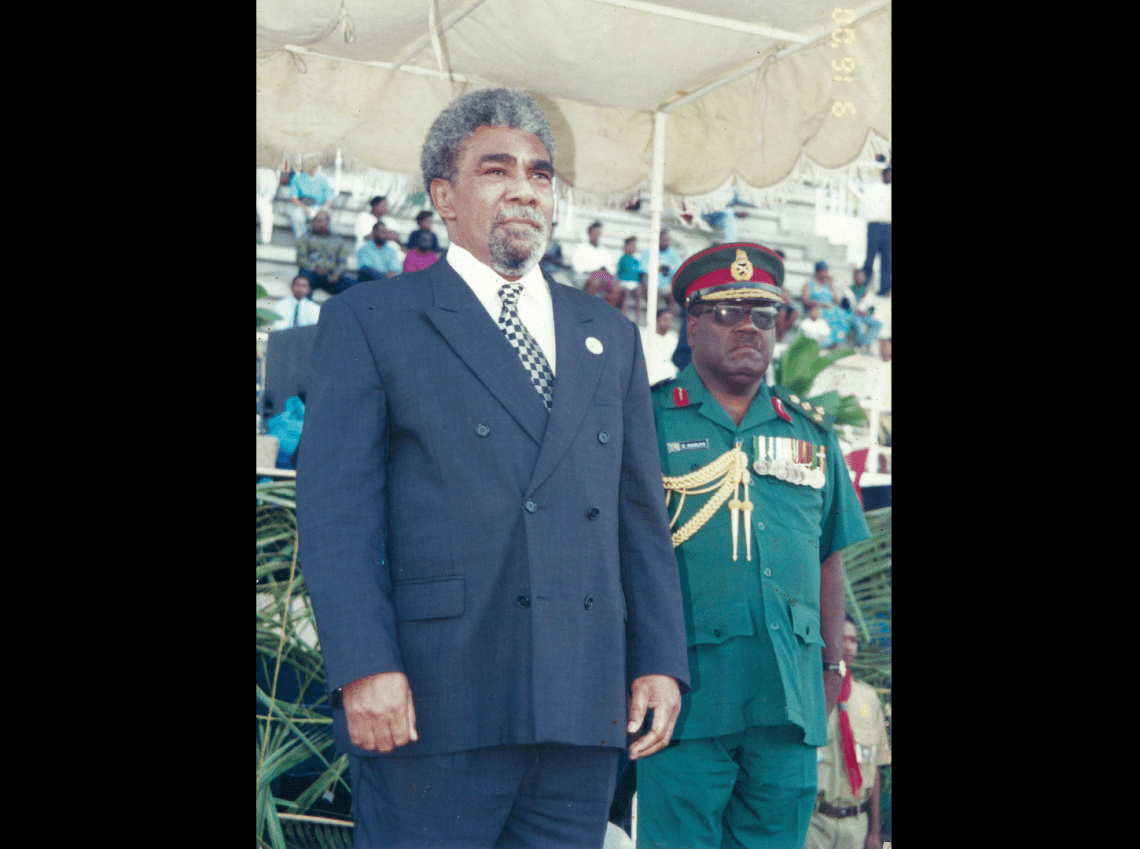 This acceptance speech was delivered by the Hon Sir Mekere Morauta MP on 14 July 1999 on the floor of Parliament upon his election as Prime Minister. Sir Mekere was PNG’s Prime Minister from 1999 to 2002. He died  on 19 December 2020. We reproduce this speech in memory of Sir Mekere and on account of its historical importance.

Our country has a new government. Today, 14 July 1999, we have made a date with destiny.

I do not pretend to you that the choice that our nation has made will immediately put right all that has gone wrong in our country. The road back will not be easy. I do not pretend that our date with destiny will be followed soon by ease and prosperity.

In all honesty, the path to order, hope and pride will start with some steep hills. But with today’s change of Government, there will be purpose and reason in the load that we will have to carry as we work our way over the hills.

The sad truth is that the reality is even worse than it seems.

The hunger is worse than it seems because past Governments have been eating the seed that is necessary for future crops.

The Government that was removed today, on Papua New Guinea’s date with destiny, tried to stem the devastating fall in the kina’s value by eating what is left of our foreign exchange reserves.

The Government that was removed today tried to prop up its own spending with huge borrowing, that must be repaid with interest in future.

The Government that was removed today increased many burdens on business to give it fast money to consume immediately. These burdens have stopped the investment that is needed for us to have incomes in the future.

The Government that was removed today raided our national financial institutions to get fast money.  In doing this, it weakened them for the future.

Worst of all, the Government that was removed today, Papua New Guinea’s date with destiny, was eating our future by seeking political advantage through weakening the central institutions of state, and bypassing and discouraging the talented Papua New Guineans who continue to offer themselves for high public service.

Today, 14th July, we have formed a Government of national reconstruction and development.

Mr Speaker; the fact that 99 Members of Parliament voted for the change indicates that the people’s representatives have heard the voice of their people. I thank all Honourable Members for their support. Together, we will build our country.

From today’s date with destiny, the Government will work relentlessly to achieve five results.

The first objective is to restore integrity to our great institutions of state, the very institutions that are necessary for our personal security and for our prosperity.

The new Government will respect the law in its dealings with the Bank of Papua New Guinea, the Departments of Treasury and Finance, the Department of Justice, the Parliament, the Courts, the Ombudsman, the Cabinet Office and all of our great institutions of state.

The new Government will respect our great institutions of state, seek advice from them, and listen to their cautions.

The new Government will encourage the return to public service of talented Papua New Guineans who have been discouraged and cast aside. We will ensure that when we need and seek advice from outside our own people, we obtain that advice in ways that encourage and strengthen our Papua New Guinean talent and institutions.

The second objective is to stabilise the kina, to earn again its respect in the international community, and to stop the rapid increase in prices that has hurt us so badly.

We cannot turn back an unhappy recent history, and return the kina to its old value or prices to their old levels.

The kina will settle at a realistic level, and we will run the monetary and fiscal policies that will stop it falling lower. These same policies will support a return to kina convertibility. Papua New Guinea has maintained financial stability before, and the new Government will do it again.

Nothing can stop the price rises that have followed the fall in the kina in recent months. Prices will continue to rise for some months yet. But under the new Government’s policies, this will be the last year of high inflation.

To support financial stabilisation, the new Government will immediately take the initiative in re-establishing productive relations with the International Monetary Fund, the World Bank and the Australian Government. We value the money on good terms. We also value the consultation that will come with return to normal relations with our traditional sources of development finance.

The third objective of our Government is to restore stability to our national budget, to stop eating the seed, and to sow the seeds for future development. Recent Governments have dissipated money and their administrative capacity by trying to do many things, and doing all of them badly. We will identify the most fertile seedbeds, make sure that they are well sown and that the new plants are nurtured.

Successive Governments have claimed that expenditures on education, health and transport were their priority. But we have not seen tangible positive results of the proclaimed policy emphasis.  Our Government will be different, and will put words into action.

We must and will address the problems of declining standards of our social services. We must and will maintain our public assets and invest in vital social and economic infrastructure.

If the Government sells government businesses, it will do this in a way that yields a maximum of funds for reduction of government debt and reduction of future interest payments. The new Government will ensure that the basic services, essential to development, that it continues to provide itself, are provided efficiently and well.

The fourth objective is to remove obstacles to investment and growth.

There is a lot of energy in our people, which yields income and wealth when it is given a chance. We will give Papua New Guineans their chance by removing the many barriers to small-scale business through more effective government or through privatisation. We will ensure that security, electricity, telecommunications, water, finance, foreign exchange and transport are provided competitively. We will review the tax system to ensure that it is the least possible obstacle to growth.

Economic projects vital to the future health of the economy, such as the Gas Project, will be given top priority.

New investment in agriculture, in both export and food crops, must and will be a key focus of our Government. Every Government has also said this before, but we are determined to make it a reality.

Our fifth, but not least important objective, is to continue the Bougainville peace process. We acknowledge our predecessors’ achievements and affirm our commitment to a progressive political settlement in Bougainville – without threat or use of force, and based on the rule of law. We call on the other parties, including Francis Ona and his supporters, to cooperate in making sure that the peace process keeps gathering strength and moving ahead.

The new Government will immediately take stock of where the peace process is now – with a view to identifying any problems and possible answers, and working with the other parties to maintain momentum and produce practical results. In doing so, we must be mindful of the need for bipartisanship at the national level if we are to give agreements reached with the Bougainvillean parties a firm legal basis.

The new Government pledges its commitment to national reconstruction and development, and invites your participation with us in this great task.