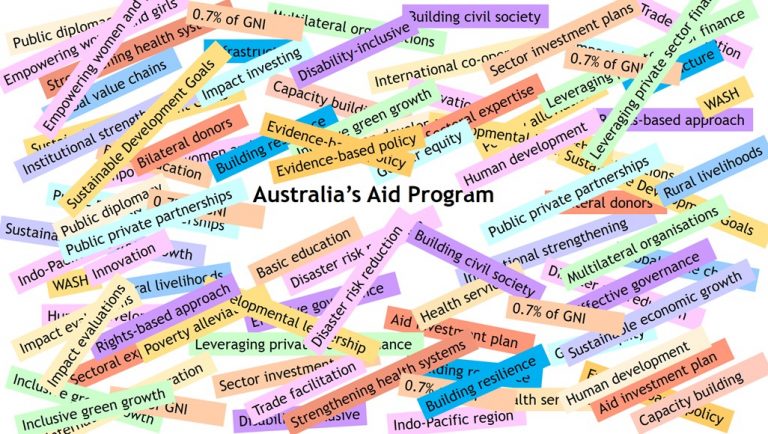 “We need to communicate aid better” is a constant chorus among those working in aid and development in Australia. Against the background of major aid cuts and the integration of AusAID into DFAT, parliamentarians tell the aid community we need to sell the message better. Minister Julie Bishop has said, “support for our invaluable aid program has to come from home, from the Australian taxpayer. So the Australian taxpayers must support it, and that will come with a better appreciation of its purpose, its intent and the outcomes.” The winning 3-Minute Aid Pitch from the 2017 Australasian Aid Conference was that we need to communicate aid better. Agencies band together to campaign for Australian aid. DFAT earnestly tweets happy snaps of aid events and initiatives. And yet something isn’t working: further deep cuts to aid are being floated and the public seems largely indifferent.

So: are there some simple aid messages that we ‘aid enthusiasts’ – in government, NGOs, academia, and the private sector – can use when we engage with ‘non-aid enthusiasts’? We know that aid and development assistance is complex. There are a multitude of issues and strands that can be bewildering for those of us working in this sector, let alone those who don’t. We easily slip into the jargon of aid and development, but it can be like putting up a brick wall against those whose support for aid we actually want to encourage.

Here is an attempt at three simple messages to help explain the aid program:

Message #1: Overseas aid is less than 1% of Australian Government spending 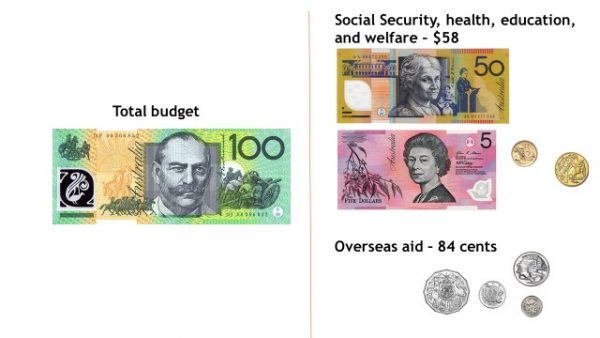 The aid community talks about Australia only spending 0.22% of GNI on aid, against the UN target of 0.7%– and with that sentence alone we’ve probably lost most of our potential audience. So let’s talk about a more commonly understood idea, such as government spending.

Surveys have shown that the Australian public thinks the Government spends more on aid than it actually does. Responses to the 2016 poll by the Campaign for Australian Aid suggested that the public thinks we spend about 13% of the federal budget on foreign aid, and we should really only spend about 10%. And when you don’t understand aid, cutting it seems like a good idea. Pauline Hanson and Jacqui Lambie have pushed the idea of cutting foreign aid to help Australian pensioners, with the latter’s policy being to “halve Australia’s foreign aid budget over the next ten years and pull our pensioners out of poverty”. How does this stack up?

The 2017-18 budget shows Australian Government spending of $464 billion. Of this spending pie, 35% will be spent on social security, 16% on health, 7% on education, 6.5% on defence and 0.8% on foreign aid. So, for every $100 of government expenditure, $58 is spent on welfare, health and education, and just 84 cents is spent on overseas aid. Or in other words, charity has already very much begun at home – and Jacqui’s proposed extra 42 cents for pensioners might not make as much difference as she thinks.

Message #2: Our aid is not cash – it’s doing useful stuff, with Australian expertise 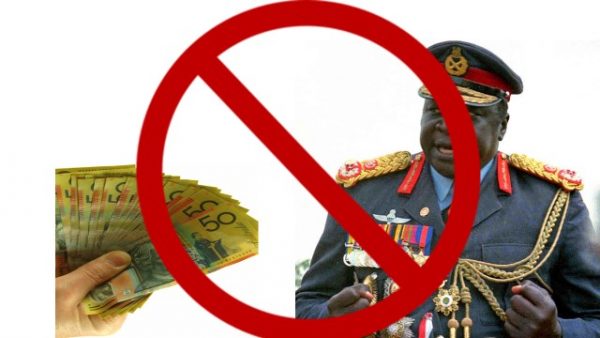 There is a longstanding narrative of dictators skimming aid loans and grants to enrich themselves at the expense of their suffering population, and no shortage of colourful examples in the excesses of a Mobutu or Mugabe. However, we shouldn’t fall into the trap of this being the standing definition of Australian aid. Australia’s aid program is not about handing over cash to corrupt regimes; it’s overwhelmingly about doing useful stuff, whatever the local political setting. We’re using Australian expertise to help our neighbouring countries in training their midwives, getting kids into school, teaching adults, improving health services, building roads, ensuring clean water, helping farmers, protecting themselves against disasters, strengthening their economies, and so on.

The government currently expresses the purpose of the aid program as “to promote Australia’s national interests by contributing to sustainable economic growth and poverty reduction.” Past purpose statements have also flagged in different ways the combined ideas of helping others, and our own self-interest. So a simple translation of the purpose of the aid program could be:

We do good things for poor people overseas. It helps them, and it helps us too.

Good things for them include better health, education, access to services, reduced poverty, opportunities for jobs and a happier life. And, good things for us include jobs for Australians, increased trade and export opportunities, reduced security threats, reduced terror threats, and even (let’s avoid the jargon of “public diplomacy”) more people thinking Australia is cool! 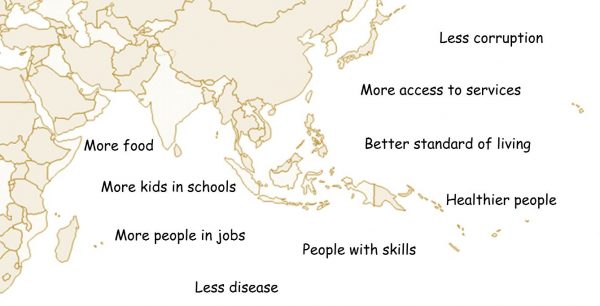 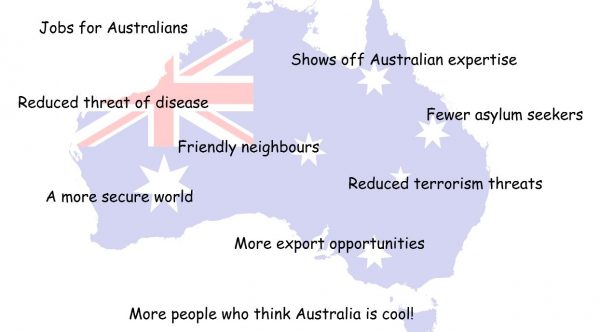 These three messages by nature involve simplification. For instance, on the “aid is not cash” message, one could point to counter-examples of past Australian budget support for PNG, or AusAID flirting with cash contributions to support national Poverty Reduction Strategies or sectoral programs – but the fundamental longstanding models of Australian aid are clearly not about cash transfers to governments. The “helping people overseas” line can also be undermined by examples where Australia’s aid has been diverted to more overt political ends such as dealing with asylum seekers, but such examples shouldn’t represent the overall thrust of Australia’s aid effort.

Aid enthusiasts will always enjoy a good delve into the complexities of the issues, and a robust development-speak debate among ourselves. However, if we want to engage beyond our own circles, we need to challenge some of our traditional ways of talking about aid. We should adjust our language accordingly to better reach those who might support what we do, if only they knew what we were talking about.

This was originally presented as part of the 3-Minute Aid Pitch (3MAP) at the 2018 Australasian Aid Conference. Watch the 3MAP livestream replay, listen to the podcast, or view the presentations. The views expressed in this post are solely those of the author.

Therese Faulkner
Therese Faulkner is a Senior Development Specialist at Coffey International, working with aid programs in Asia and the Pacific. She previously held senior positions in DFAT and AusAID, where she worked from 1990 to 2014. Therese holds a Graduate Diploma of Public Policy (Development Administration) from ANU.