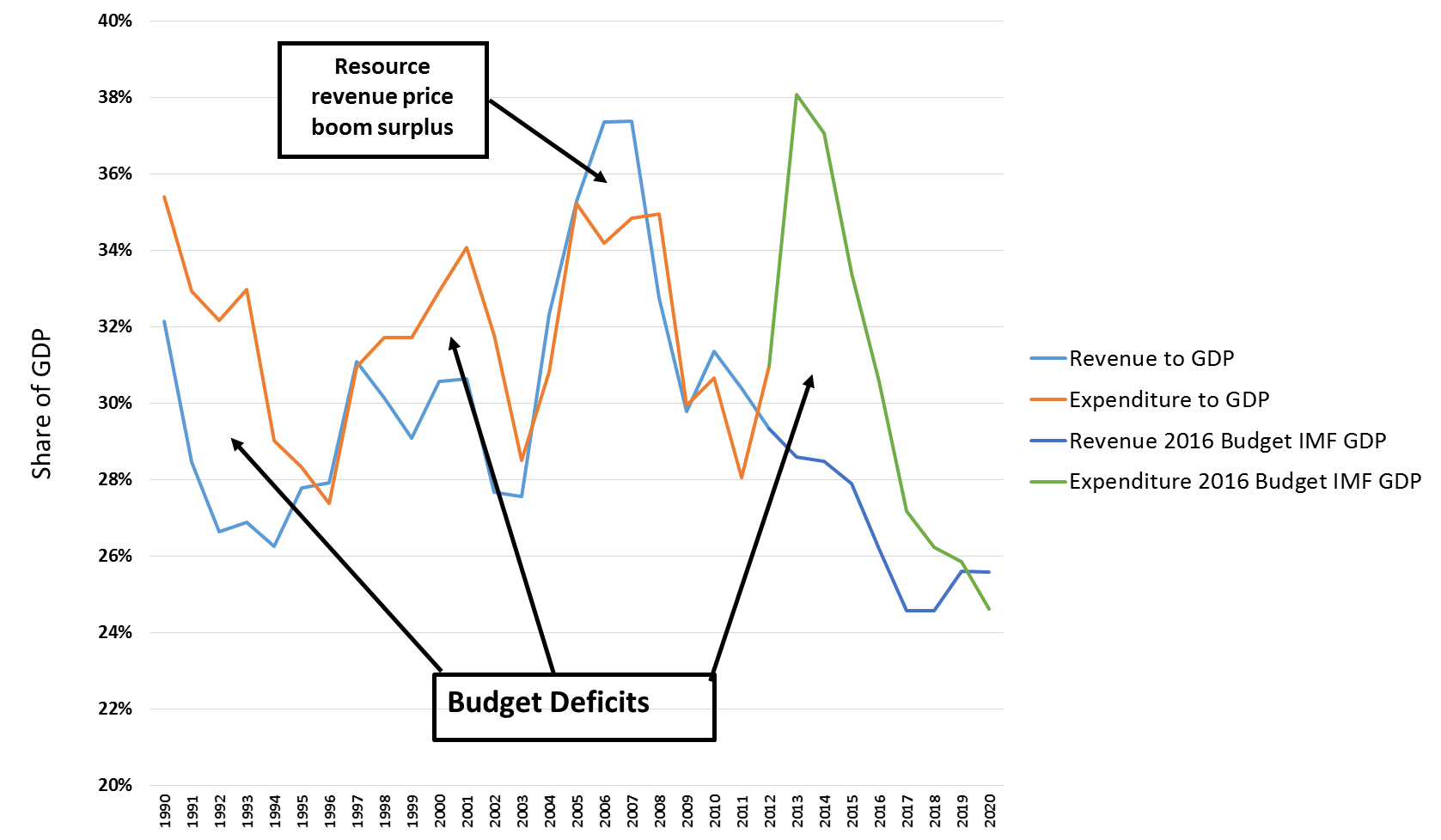 Papua New Guinea’s budget, released on 3 November and rushed through Parliament the same day, could have been so much better. Given the country’s record deficit levels, fiscal consolidation was vital even before the fall in international commodity prices. However, the proposed expenditure cuts do not match the government’s stated priorities of protecting health, education and infrastructure. They are also excessive – even more than those imposed on Greece as part of its structural adjustment program. Further, the budget suffers from factual errors relating to GDP and the external accounts, a lack of revenue effort, and inadequate transparency. This is the first of two posts providing a detailed analysis of the 2016 PNG Budget.

The budget makes a serious error in calculating PNG’s nominal GDP – and this affects all the key ratios and messaging from the budget. The nominal GDP budget estimates assume there has been no fall in LNG or condensate prices. Adjusting for this error using BPNG figures, GDP in 2015 is estimated to be K4.4 billion (or 9%) lower than shown in the budget. The recent IMF Article IV report estimates that GDP is even lower. IMF figures show 2015 nominal GDP is 11% lower and 2016 figures 12% lower than those used in the budget. These IMF figures, with the adjustment continued beyond 2017, are used in this analysis (see a spreadsheet with the figures here).

A key issue in making a detailed analysis of the 2016 budget is the introduction of a new accounting system, called the IMF Government Financial Statistics 2014. This is a positive change and modernises PNG’s budget reporting from its previous 1986-based system. However, the budget only covers the general government sector, when it should also cover the wider public sector. This means that there is almost no coverage of the actual financing operations of a large part of the public sector – specifically the new Kumul structures holding state owned enterprises (SOEs). Indeed, the level of detail provided on their operations in the budget papers has actually declined, with less information provided in Chapter 8 on “Improving Public Enterprises” relative to previous years.

Without such information it is difficult to fully gauge the financial challenges facing PNG, especially as the Kumul structures are taking on major liabilities (such as loans to fund the purchase of nearly K3 billion in Oil Search shares). This is an important caveat to the following analysis – and one senses that things are even more challenging than covered below.

The key fiscal ratios of revenue and expenditure of the general government sector as shares of the economy are shown in Figure 1 (data is also available as a spreadsheet). The gaps between these two lines represent either deficits or surpluses. The positive news is that PNG’s historically high fiscal deficits are planned to be dramatically reduced. This is important for macroeconomic stability and long-term growth. But the figure also highlights some key challenges.

First, the starting point for the required fiscal consolidation is even worse than anticipated. The deficits for 2013 and 2014 are now estimated to be 9.5% and 8.6% of GDP – higher by around 1.6 percentage points than previous estimates. This is the unfortunate and self-imposed starting point prior to the problems created by a fall in international commodity prices in late 2014. Indeed, if the starting point in 2015 was something more akin to the deficit/surplus patterns of the previous decade, then the fall in commodity prices could have been met with an expansionary fiscal policy, rather than the fiscal consolidation now required.

Second, the budgeted expenditure decline is enormous, much bigger than that observed in earlier decades to close earlier deficits. In my second post in this series, I will argue that the expenditure reduction is too sharp and falls too heavily on priority expenditures. 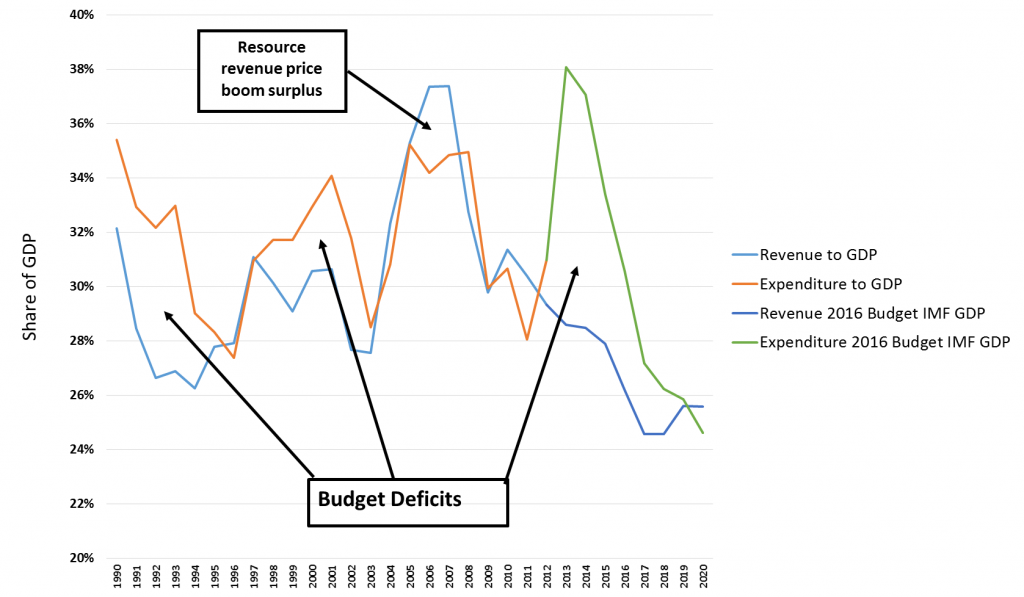 Falls in revenue are a critical driver behind PNG’s fiscal crisis. The revenue to GDP ratio is expected to fall from 28.5% in 2014 to 24.6% in 2017. There are two fundamental reasons why the tax ratio is currently falling (these are discussed in more detail in this paper from June this year). First, the resource sector is now a much larger share of the PNG economy, with the start of the PNG LNG project, and the resource sector is taxed more lightly than the non-resource sector. Second, the average tax rate of the resource sector has dropped from around 30% for the decade to 2012, to current estimates of only 10%. Part of this reflects lower commodity prices, but it also reflects explicit policy decisions to give tax concessions. Increasing resource revenues from new projects is a critical part of PNG’s medium-term fiscal adjustment (so tax concessions need to be reduced for any new projects).

The fall in resource revenues has been temporarily buffered by very high dividend payments from other SOEs in 2015 and 2016 (as well as a rather extraordinary bring forward of a K507m gas ‘dividend’ in 2014, which appears to be a use of loan funds as no dividends were actually payable from the PNG LNG project in 2014). These dividend payments total K1,045m in 2015 before falling away to K386m in 2017 (K80m is shown directly as dividends in the revenue tables with another K306m in LNG dividends going into the Sovereign Wealth Fund – with some of these trapped there in the Savings Fund). The low level of returns expected in future years from PNG’s SOEs is a challenge, as are concerns about their efficiency and quality of services. In previous fiscal crises, more consideration has been given to privatising SOEs (such as the sale of a failing former government bank to create the successful Bank of the South Pacific).

PNG has invested in a very significant tax review over the last two years. Unfortunately, the government has decided on no significant tax changes in the 2016 budget. However, the fiscal situation is a strong argument for initiating tax increases consistent with medium-term tax reform directions. Even if nothing comprehensive was introduced in 2016, there were options to raise revenue in this budget. The simplest option would have been lifting taxes on the traditional targets of alcohol, tobacco and petrol (the latter especially so in the context of declining world prices, so there would have been no net impact on consumers). This budget represents a missed opportunity for much needed tax reform in PNG.

There are arguments that PNG can sustain a higher level of public debt, but also concerns given the unclear, but possibly high, levels of off-budget debt. The IMF notes that there are a number of liabilities that are not included in the public debt figures. Indeed, the IMF explicitly includes the UBS loan for the controversial purchase of Oil Search shares in March 2014 in its debt analysis – this adds 6.8% to the figures above. Overall, the IMF notes that “there has been a significant increase in overall public debt, which amounts to about 56 percent of GDP once arrears to a superannuation fund and other liabilities are taken into account” (p.14 of 2015 IMF Article IV).

The external sector – too optimistic

The budget presents a very positive image of the strength of PNG’s balance of trade and current account. However, the tables presented are seriously flawed. The balance of payment table, as for the GDP tables, uses the same GDP information discussed earlier, which assumes that LNG prices have not fallen. Using BPNG LNG prices, I estimate that this overstates the size of the current account balance by K4.4 billion in 2015. The tables also assume a remarkable drop-off in the value of imports. Rather than PNG engaging with the Asian century, the tables portray a much more insular economy, with imports dropping precipitously from K9 billion in 2014 to K6 billion in 2015 and only K4 billion by 2020.

The 2016 budget made a positive step in fiscal consolidation. As noted above, however, it is marred by large errors in GDP and external account calculations, missed revenue opportunities, an understatement of public debt and a lack of transparency on the operations of the wider public sector. In my next post I will examine some worrying expenditure patterns revealed by the budget.

Paul Flanagan is a Visiting Fellow at the Development Policy Centre. Read the second post in this two-part series on the 2016 PNG Budget here.