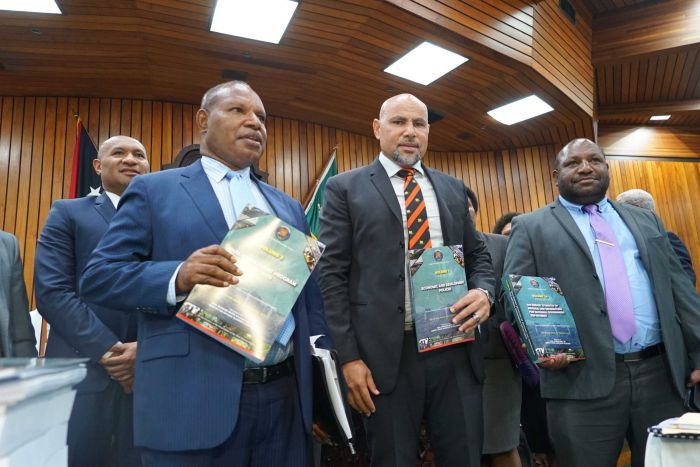 PNG’s 2018 Budget Strategy – released just a couple of weeks before yesterday’s budget – candidly and for the first time admits that the country is facing a “revenue crisis”. That’s certainly true. Adjusting for inflation, revenue is back this year at 2006 levels.

Normally, a blog like this would look at the budget through a fiscal lens, and analyse revenue measures, expenditure measures and borrowing. Those are all certainly important, but in this post I’m going to take a different approach. That’s because the collapse in revenue reflects a deeper economic crisis: although the government won’t talk about it, the evidence points to a recession in the non-resource economy.

The crisis facing the PNG economy is shown by the behaviour of imports. Imports have fallen by 57% in nominal value from their 2013 peak, and are now back at 2005 levels. (The exchange rate is also at about 2005 levels, meaning that PNG is importing the same dollar value of imports as it was 12 years ago.) This rapid decline in imports is throttling the economy. PNG needs to import machinery and equipment to grow. But imports in this category have fallen by 58% since 2010, including by 20% in 2016 alone.

PNG imports of goods and services 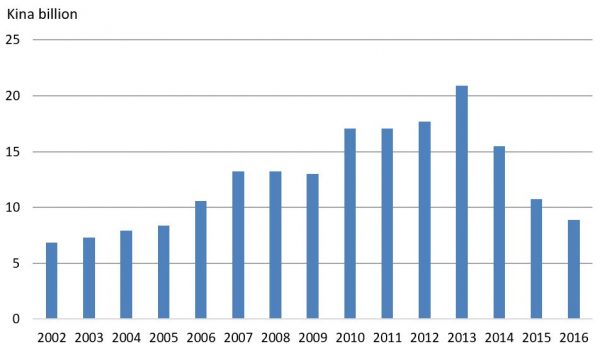 The ongoing rapid decline in imports is partly indicative of an economic recession, but is also due to foreign exchange rationing, which in turn reflects an overvalued exchange rate.  The best thing PNG could do to stimulate economic growth, and thereby boost revenue as well as jobs, would be to depreciate the exchange rate. This would, over time, reduce the need for rationing and stimulate exports. To its credit, the 2018 budget speech does refer to “private sector activities being hampered by the forex imbalance,” but it doesn’t provide a solution to this pressing problem.

Depreciation of the Kina against the US Dollar, month on month

The government needs to instruct the Central Bank to depreciate the exchange rate significantly. The budget or the run-up to it would have been a good time to do this. Given all the foreign exchange rationing, it is not realistic to return float the Kina, but the exchange rate needs to be set in a sustained downward direction. It’s not that the budget was wrong to increase a few tax rates and to emphasise improving compliance. It’s just not enough. Both these measures will in fact further depress the economy. By keeping quiet on the exchange rate, the 2018 budget forgoes its best chance to stimulate the economy and increase revenue.

Even if the government had acted on the exchange rate, given the revenue crisis tough choices were needed on the expenditure side. So here’s one observation on  expenditure choices. The August 2017 100 Day Plan promised “reduction of DSIP and PSIP”, the multi-million kina grants that go to PNG’s MPs. The IMF endorsed this call, saying in September that these programs “were ramped up on the expectation of much higher natural gas revenues than have eventuated.” Unfortunately, the promise to cut DSIP and PSIP has not been followed through on in the budget. DSIP and PSIP combined are budgeted for 2018 at K1.1 billion, the same level as in the 2016 budget.  With non-salary, non-interest expenditure also back this year at 2006 levels, PNG simply can’t afford such large MP funds. The result will be continued under-funding of core government services.

The failure of the 2018 budget to make the hard choices – depreciate the exchange rate and cut funds to MPs – is not only bad for the economy, for revenue and for core services. It will also make it more difficult for the government to obtain the budget support they are negotiating with both the ADB and World Bank. Both institutions need to get permission from the IMF to proceed with budget support. The IMF in its September statement called for gradual exchange rate depreciation and cuts to MP funds. The government and its 2018 budget have delivered neither.