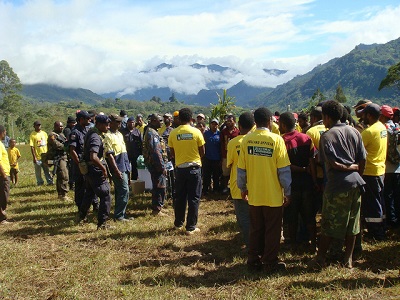 If you are interested in a result from a particular constituency in a particular year you can find it using the database’s Data Explorer. If you want booklets of results you can download them from the Datasets page. And if you want to conduct your own analysis you download results spreadsheets from the same page. There are also other features including an electorate map and a detailed report on electoral trends.

To launch the PNG Election Results Database online we wanted to provide you with some basics. Here are five key points you should know about election results in Papua New Guinea.

Point 1: Candidate numbers have gone up 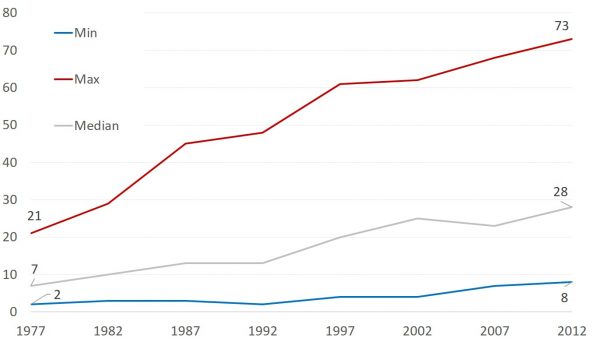 Point 2: Winning candidate vote shares have come down – to a point 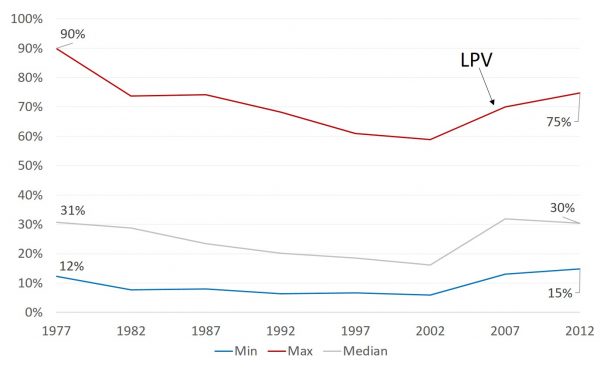 Point 3: There are no clear trends in incumbent turnover rates

With more candidates contesting one might expect sitting MPs to be having an increasingly difficult time holding onto their seats. This hasn’t been the case. Incumbent MPs don’t have it easy. In most elections about half of them have lost. But while, as the chart below shows, turnover rates have bounced around, there’s no clear trend towards greater turnover. Of course, 50 per cent is still high. It suggests discontented voters. It also means that at any point in time half the members in parliament are new to politics. In the 2012 parliament, only about 20 per cent of MPs had two or more previous terms’ experience.

Percentage of incumbents who contested and won or lost 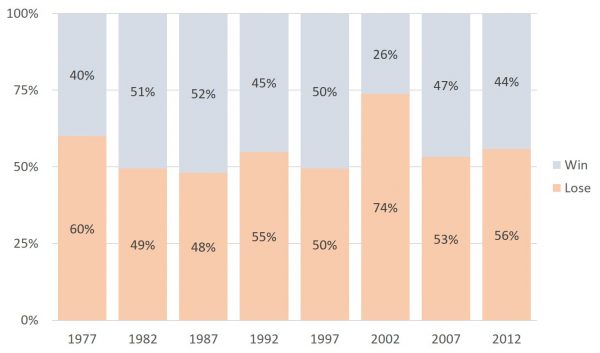 Point 4: There is a lot of variation

Key electoral features differ a lot between different parts of Papua New Guinea. Some of these differences are regional—on average incumbent turnover rates are lower, candidate numbers are lower, and winners win with higher vote shares in the Islands region. However, even within regions there can be a lot of variation. Indeed, there can be a lot of variation within the same province as can be seen in the next chart, which shows the number of candidates standing in the different electorates in Enga Province in 2012. These are neighbouring electorates, but in terms of candidate numbers at least, in 2012 they had very different elections.

Candidate numbers in Enga Province constituencies in the 2012 election 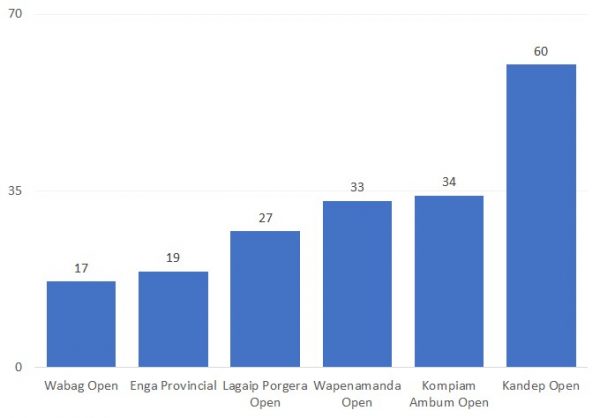 Point 5: The playing field is unfairly tilted against women candidates

Most of the time access to money is crucial in electoral campaigns in PNG. Most of the time having influential community leaders supporting you is important in electoral campaigns in PNG. Often voters, other than close relatives, will only vote for a candidate if they think they are likely to win. Women candidates usually suffer in all of these areas in PNG. Women usually have less money than men. It is harder for women to gain the support from community leaders who are usually men. And because PNG does not have a long history of successful women candidates, it is probably the case that voters often discount the chances of existing candidates and don’t vote for them. These challenges are compounded in instances by issues such as gendered norms of how women are expected to behave. Taken together all of this makes it very hard for women candidates to win. The results of this can be seen in the figure below. Papua New Guinea does not lack for strong, intelligent aspiring women politicians, and hopefully they will be increasingly successful in winning elections. But for now they aren’t contesting on an equal playing field.

Number of successful women candidates in PNG, by election

These are five key facts for you. There is much more to be discovered if you want to work with the data in the database.