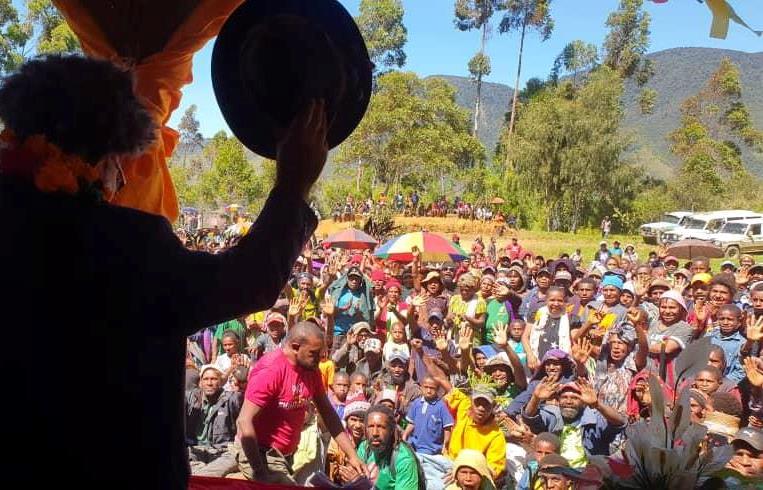 PNC campaigning ahead of the elections

PNG elections and the economy: Marape vs O’Neill

It is often said that PNG elections are fought on local issues, and this is no doubt the case. However, national issues have certainly featured prominently in this year’s election campaign in the run-up to voting, which starts today.

One of the striking features of this year’s election is the clear choice, at the national level, between James Marape, the incumbent PM and head of the Pangu Party, and Peter O’Neill, the PM before Marape, head of the People’s National Congress (PNC), and the person widely perceived to be Marape’s main rival for the top job.

Both have been putting out newspaper ads and press releases. Both – guaranteed of their own re-election – have been touring the nation trying to attract support for their candidates. Each has ruled out joining forces with the other to form government after the election. (In PNG, a coalition government is inevitable.)

Marape was O’Neill’s Finance Minister, but these days there is no love lost between the two. Marape said recently “Papua New Guineans either vote Pangu Pati back to continue its reconstructive work in rescuing the damaged national economy, or make the mistake of returning PNG to the hands of the People’s National Congress”.

O’Neill, for his part, accuses Marape of inexperience and a lack of achievement, saying “This government lacks simple and basic knowledge and experience … to manage this country.”

Marape is running on his record, saying that O’Neill left the economy in a mess (“bleeding and struggling”, to use his famous line), and that, despite the additional havoc caused by COVID-19, he has been busy leading a process of economic and budget recovery. There is certainly some truth to this. The Marape government has been much more transparent about the economy and budget, opening its books to the International Monetary Fund where O’Neill refused to do so.

One full-page ad taken out by Marape is titled “Marape Economic Record: Protect the Budget. Protect the Economy”. Another summarises his flagship “PNG Connect” road-building program.

To the extent Marape does focus on policies, they are ones already implemented, or at least introduced. Policies highlighted by the PM in his interview with EMTV’s veteran journalist John Higgins include an increase in the tax-free income threshold, and support to help SME (small and medium enterprise) borrowing.

Marape continues to run hard on his “Take Back PNG” slogan. Here he is promising change, but of a very vague sort, committing in his EMTV interview to “change the resource laws framework completely”, while still reassuring investors that they will get a fair return.

O’Neill is also running on his record, defending his own, and critiquing Marape’s. His press release attacking Marape’s ad claimed that “the PNG economy has been ruined in three short years”.

However, O’Neill is also putting more emphasis on new policies, noting in his interview with Higgins the 14 policies approved at the recent PNC convention. These policies, which feature prominently on the PNC Facebook page, cover a wide range of issues, from political stability to public services reform, job creation to law and order, and investing in infrastructure.

One PNC policy is to abolish the system of loans for higher education that the Marape government has started to introduce. That would save the government money, but many of the PNC policies are expensive and unrealistic – for example, high schools for every local-level government, a bank for every district, and a nursing and teachers’ college for every province.

Marape’s major vulnerability in terms of his reputation as an economic manager relates to Porgera, the large gold mine that was closed in April 2020 shortly after its 30-year lease expired in 2019, and which, despite an agreement being reached for its reopening, is yet to do so. The terms agreed for that reopening are said to be no more advantageous to PNG than those on offer before it closed.

O’Neill’s reputation as an economic manager is tarnished both by the country’s poor economic performance under his stewardship (formal sector employment and non-resource GDP per capita declined in most of the years he was PM), and by some spectacular cases of waste during his time as PM. PNG lost US$100 million to the abandoned Solwara underwater mining project, and more than that through O’Neill’s UBS loan, labelled an “unnecessary disaster” by the Royal Commission Marape set up to investigate it.

Both sides blame the other for an increase in government debt. For the record, the debt to GDP ratio increased from 19% of GDP in 2012 to 40% in 2019 under O’Neill, and then to 52% of GDP in 2021 under Marape. Trends in interest to GDP are also of interest. This variable increased over the same years from 1% to 2.6% of GDP under O’Neill, but has actually fallen since to 2.4% of GDP under Marape, who has been successful in securing highly concessional loans from development partners.

Each side also blames the other for allowing the exchange rate to depreciate. In fact, what matters is the real exchange rate, and this has not depreciated since the boom days of 2012, thereby preventing the economy from adjusting and leading to foreign currency rationing which has been a drag on growth. Even though the overwhelming majority of voters are rural and would benefit from a depreciation (earning more from their coffee sales, for example), a more competitive currency is one policy no politician wants to come anywhere near.

How influential this pre-election national jostling, positioning and posturing will be in the elections that start today remains to be seen. As unlikely as it seems, one cannot rule out a third candidate for PM emerging post-elections. But PNG citizens, if they want to make it the basis of their vote, do at least face a choice between two front-runners for the top job, and their two parties, and indeed between two economic narratives. That surely is a good thing.