The 2014 Final Budget Outcome for PNG, officially released in April, confirms that its medium-term fiscal strategy is off-track. Indeed, its real 2014 budget deficit is the largest in the country’s history according to budget documents. Revenue shortfalls were forecast from 2012 to 2014, but then large PNG LNG revenues were expected (which is now unlikely for many years). The 2013 deficit of a then historic high of 7.7% was planned to drop to 5.9% in 2014. This target has been missed, and the official deficit is recorded as 7.3%. More worryingly, the underlying fiscal deficit is now 9.0% of GDP. This higher figure represents the gap between domestic revenues and expenditures for 2014. It is the most relevant figure for understanding pressures on PNG’s macroeconomic stability. The 9.0% of GDP deficit figure excludes the K415m in dividends from the National Petroleum Company of PNG (as they were paid in 2015) and the K279m in “savings” (changes in trust fund balances, as they actually accrued in years prior to 2014). PNG’s budget balances are shown in the graph below – 2014 is the worst outcome since Independence. 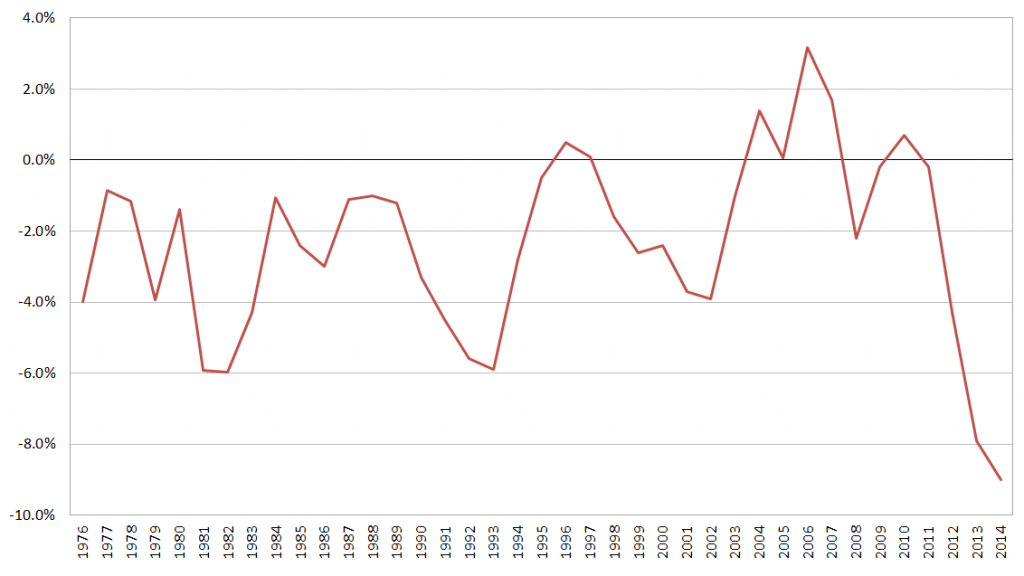 The highest deficit in PNG’s history is putting pressure on the balance of payments, adding to exchange rate shortages, building inflationary pressures, pushing up debt and raising interest costs. Domestic borrowing jumped from the K1,708.1m estimated in the original budget for 2014 to K2,983.1m. PNG’s interest costs jumped from K486.7m in 2013 to K953.1m in 2014 – the increase in interest costs since 2012 has been much greater than the costs of tuition-fee free education. All of PNG’s resource revenues should be available to help repair these budget shortfalls – there should be no diversion to off-budget purposes such as Kumul Holdings or any Savings Fund.

A second concerning feature of the 2014 Final Budget Outcome is the large increases in public service wages and payments. Personnel emoluments were budgeted at K3,138.4m for 2014 – but actual expenditures were 17.8% greater at K3,696.9m. Since 2013, these payments have increased by 32% – this is an extraordinary result and almost hard to believe. Significant public service reforms will be needed to help wind back the budget deficit to more sustainable levels. This will be a major challenge, especially with significant decentralisation to District Authorities, and a history of stalled public sector reform processes. More generally, with this poor outcome last year, and a challenging fiscal situation this year, a mini-budget is vital to get PNG’s fiscal policies back on track.