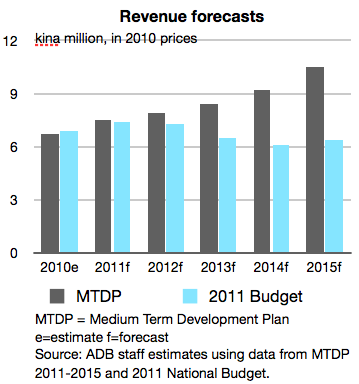 In this guest article, Dominic Mellor provides a macroeconomic assessment of PNG’s 2011 budget.

The $3.5 billion national budget for 2011 is the largest ever for PNG, with record levels of development funding allocated to education, health and infrastructure. The government expects to generate sufficient revenues to ensure a balanced budget.

If well implemented, a robust budget that prioritizes social development is positive for PNG. There are, however risks in the economic assumptions underlying the budget framework. In particular, large discrepancies in revenue forecasts contained in the Medium-Term Development Plan (MTDP) 2011-2015 and the national budget may create funding expectations that will test fiscal discipline.

The construction phase of the PNG liquefied natural gas (LNG) project will boost economic growth over the short term. However, falling exports is likely to slow growth as 2015 approaches. Crude oil production will decline as oil fields mature, gold production will slow and copper production halt by 2014 as the Ok Tedi mine approaches closure. The earliest the LNG project will begin exporting is 2015, while government revenue and dividends will not be significant until 2018. These timelines may be further delayed due to ongoing land access and compensation issues.

Against a backdrop of diminishing mineral and oil exports, the budget’s revenue forecasts are prudent; the budget assumes revenues decline by 7% in real terms between 2010 and 2015. In contrast, development plans outlined in the MTDP are based on expectations that revenue will increase by 57%.

This wide divergence between the revenue forecasts of the 2011 budget and the MTDP will need to be reconciled. Government agencies are currently aligning their corporate plans to the MTDP. This may create funding expectations that will be difficult to reverse, especially as 2012 is an election year. A test of the government’s fiscal discipline is looming.

The differences in non-revenue forecasts can be partly explained by the MTDP’s more optimistic GDP growth outlook. However, the absence of reliable data on the non-mineral sector makes it impossible to verify the accuracy of GDP estimates in budget documents.

The latest national accounts from the National Statistical Office are for 2006. More recent GDP estimates have been prepared by the Department of Treasury and Finance using industrial categories. ADB staff have assessed the plausibility of these estimates by constructing an expenditure-side GDP series using government expenditures and net export data. If the estimate of overall GDP in 2010 is accurate, then large trust fund withdrawals, coupled with a widening trade deficit would imply a very large contribution to growth from private consumption and investment. This contribution would be much higher than in previous years. The same is true for 2011.

There is an unavoidable conflict of interest when central government agencies responsible for budget planning also estimate GDP. Aside from a tendency to inflate non-mineral revenue forecasts, there are also financing risks, as higher GDP estimates allows for greater borrowing. The updated debt strategy allows for public debt levels of up to 30% of GDP. 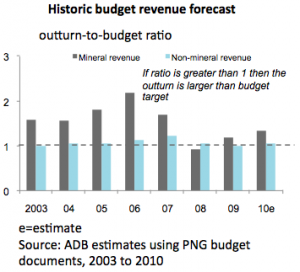 Historically, mineral revenue outturns have tended to exceed budget targets because commodity prices have been vastly under-forecasted. This generates large windfall revenues that have been directed towards discretionary capital spending in supplementary budgets. More realistic commodity assumptions, while still erring on the side of prudence, would have increased resource flows to under-funded social sector recurrent expenditures.

Irrespective of GDP estimates, there is strong evidence that the domestic economy is operating at near capacity in selected sectors, particularly construction and transportation. To maximize the efficacy of public spending, the government should consider prioritizing only essential capital works projects until the construction phase of the LNG project winds down in 2012.

After failing to comply with the medium-term fiscal strategy in 2009—when trust fund withdrawals were 11% of GDP, above the 4% limit—the government is likely to adhere to the strategy in 2010 in part because trust funds have been largely depleted. However, if recovering commodity prices replenish the trust funds, then compliance with the strategy will be critical. There continues to be a lack of transparency on how trust fund monies are being used, making it hard to verify the degree to which spending is aligned with development priorities. 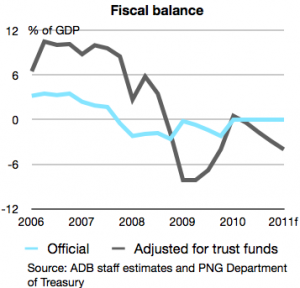 The official fiscal budget is balanced for 2010. In accordance with international standards, the fiscal balance, adjusted mainly for trust fund spending, is a slight deficit of 0.5% of GDP in 2010 (8.1% deficit in 2009). The non-mineral deficit is 7.5% of GDP.

It is positive that the budget set aside funds to fully fund superannuation liabilities as legislated, and to partially meet existing arrears. Commitments were also made toward LNG project-related liabilities in the 2010 supplementary budget. Given the uncertainty on commodity prices and volumes, there remains a risk that public liabilities may increase. The non- mineral deficit needs to be contained until LNG project revenues are realized.

The MTDP commits the government to spending a significant portion of public resources on priority areas. These include education and health, each of which received 9% of 2011 budget and recurrent appropriations, and infrastructure, which received 5%. Although the size of the core budget has increased in the last decade, the percentage of spending on education is only slightly higher than in 2002, after several years of decline. Percentage spending on infrastructure has declined and been very volatile due to fluctuating rates of drawdown on appropriated funds.

Official inflation remained unexpectedly low, at 5.6% by the end of September 2010. Despite capacity constraints in the construction and transportation sectors, surging rental property prices, shortages in skilled labour, and considerable trust fund withdrawals, the expected pickup in inflation has yet to materialize. This is partly because of technical flaws in the consumer price index, which excludes rental pricing. It is also possible that trust fund withdrawals have yet to be fully expended.

Growing liquidity will fuel inflation. The sizable development budget, and the potential lagged impact of trust fund withdrawals ahead of the 2012 elections, will increase liquidity. Historically, inflation has been imported. As such, the central bank has tended to focus on exchange rate stability, accumulating foreign reserves as a buffer. This increases the contribution of net foreign assets to money supply. The central bank needs to balance increasing foreign reserve levels against the cost of sterilizing the liquidity this accumulation creates.

The near-term challenge is to contain inflation in a supply constrained economy. There is a fiscal need to prioritize essential capital works until the LNG project construction phases out, while the central bank must guard against the liquidity impact of large net foreign asset accumulation.

Inconsistencies in revenue forecasts between the annual budget and the MTDP need to be reconciled. The medium-term macroeconomic framework should consider the risk that public liabilities may build up until LNG project revenues are realized.

The capacities of the National Statistical Office and the Bank of PNG to produce independent GDP estimates is important to allow for scrutiny of revenue forecasts underpinning the budget, and assessment of public sector borrowing capacity.

A version of this article appeared first in the ADB’s Pacific Economic Monitor, which can be found here.

Dominic Mellor
Dominic Mellor is an Economist for the Asian Development Bank and is based in Papua New Guinea.