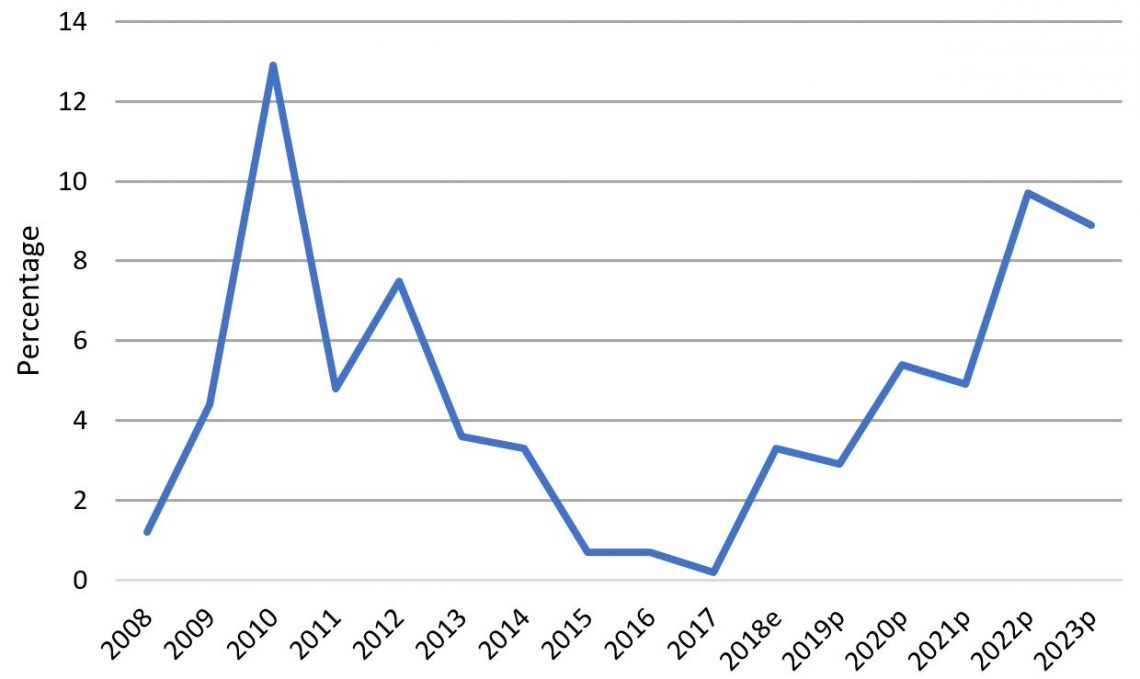 According to World Bank data, Papua New Guinea is the tenth most resource intensive economy in the world. Using its measure of underground resource rents (profits from oil, gas, coal and minerals) as a percentage of GDP, out of 205 countries PNG comes in tenth at 19.3%, just below Saudi Arabia at 20%. By comparison, the global average is only 1.5%. It really is no exaggeration to say that PNG is the Saudi Arabia of the Pacific.

When it comes to the measurement of national economic activity, Gross Domestic Product (GDP) is a poor choice for resource-intensive or resource-dependent economies. Ideally, we would use Gross National Income (GNI), which excludes the profits taken offshore by multinational mining and petroleum companies, but good GNI data is not available for PNG. The next best alternative is to use non-resource GDP (called “non-mining GDP” in PNG), which excludes the output of the petroleum and mining sectors, but captures their all-important spillover effects into the rest of the economy.

The figure below uses non-resource GDP (sourced from PNG Treasury) to tell the story of the PNG economy over the last decade or so. It is a story that can be told, perhaps, in three parts. 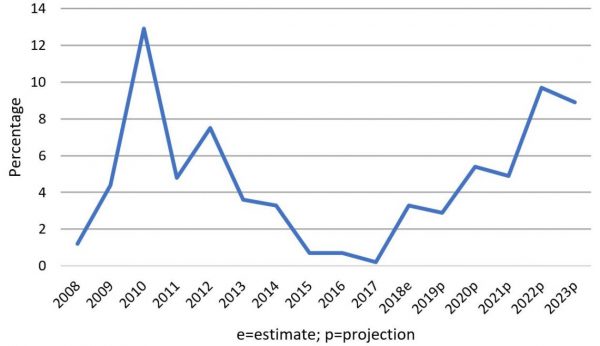 The early years are the boom period (which actually started around 2003, with a dip for the GFC in 2008), when the economy was doing well, revenue to the government was expanding rapidly, and lots of new jobs were being created.

Unfortunately, every boom comes to an end, and PNG’s did around 2013 or 2014, with the end of the construction of the PNG LNG project, and the fall in oil prices. Resource revenue dried up, the stimulus of the PNG LNG construction was withdrawn, and economic growth slowed, right down to around zero in 2015, 2016 and 2017. But non-resource growth accelerated in 2018 to around 3%, and, as you can see from the graph, better times are projected to be ahead for the economy.

So is the PNG economy now recovering from the bust, and heading towards another boom? There is no doubt that 2018 was a better year. This is despite the February earthquake, which of course was a humanitarian disaster and did disrupt resource production, but otherwise did remarkably little damage to the rest of the economy. A range of other indicators both confirm and explain higher economic growth in 2018. In particular, the foreign exchange shortages that have plagued the economy over recent times lessened on the back of a massive foreign borrowing program which brought about one billion US dollars into the country. Revenue grew rapidly: at 17% after inflation, for a variety of mainly one-off reasons, including a pick-up in resource revenues and a sweep of government authority cash balances. The combination of rapid revenue growth and large borrowing allowed the government to expand government expenditure greatly: which it did by some 16% after inflation – the first increase after three years of decline.

Given such fiscal expansion, no wonder the economy started to grow again. But that, it turns out, is also the problem. The 2018 recovery was on the back of one-off factors. It is not easy to borrow one billion US dollars in foreign loans in a single year. With more than half this year gone, PNG has only secured just over $100 million so far. And certainly you can’t keep increasing expenditure at double-digit rates.

Absent the one-off factors of last year, the indications for this year are a lot less positive. Foreign exchange shortages are growing again, revenue is below target, and, with limited borrowing, expenditure is low as well. PNG’s own Treasury put it bluntly in its just-released mid-year statement: “The widening of the foreign exchange imbalance in recent months and the tightness in fiscal spending will also impact adversely on non-mining [non-resource] GDP growth in 2019.”

To be sure, future-year prospects are better, with some important infrastructure projects underway and the Papua LNG agreement signed (though now under review). But for now PNG’s incipient recovery seems to be stalling.

What can the new Prime Minister and his team do to address this problem of a faltering recovery and get out of the “post-boom bust” period that PNG has been stuck in for too long? Clearly, the answer is not simply to wait for the next resource project. In the next post, I provide some policy suggestions.