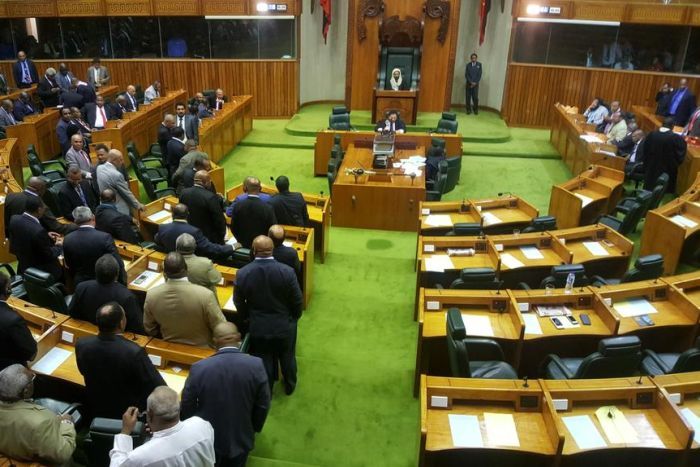 PNG’s Parliament votes in a no confidence motion against O’Neill (Credit: ABC/Eric Tlozek)

PNG’s fluid politics: winners and losers from O’Neill to Marape

On 30 May 2019, James Marape replaced Peter O’Neill as the Prime Minister (PM) of Papua New Guinea (PNG). This blog does three things: first, it shows the level of fluidity in PNG politics by discussing events leading up to Marape’s election as PM; second, it compares the allocation of portfolios by party numbers and by regions under O’Neill and Marape Governments; third, it discuses the re-appointments of ministers in the Marape government.

PNG politics is fluid. In January 2019 the government voted to adjourn parliament with 88 votes to the opposition’s 23 (Figure 1). On 10 April 2019, Marape resigned as Minister for Finance as well as member of People’s National Congress (PNC) party led by O’Neill. Joining the opposition, he was nominated to replace O’Neill in a vote of no confidence when parliament met on 7 May 2019. Marape was later followed by 26 other MPs who either resigned as PNC members or left the coalition and joined the opposition, increasing numbers to 50. To avoid a vote of no confidence, the government voted again to adjourn the parliament to 28 May 2019, but this time by only 59 votes to the opposition’s 50. After the adjournment, in an attempt to attract more MPs to the opposition camp, James Marape withdrew his nomination and put the position on the table. More MPs from the coalition, including 15 MPs from the United Resource Party (URP), led by William Duma, left the government coalition to join the opposition.

In a secret ballot, the opposition nominated Patrick Pruaitch, leader of National Alliance party, as the opposition’s nominee for prime minister. When the parliament met on 28 May 2019 the opposition moved the motion to replace the Parliament Business Committee – the committee that decides the validity of the motions of no confidence. They succeeded in replacing the government MPs in the Committee with opposition MPs by 67 votes to government’s 42 votes. With a vote of no confidence against him imminent, O’Neill resigned on 29 May 2019. In turn creating a vacancy in the prime minster’s position, invalidating the vote of no confidence, and nullifying Patrick Pruaitch’s nomination as opposition candidate for prime minister. 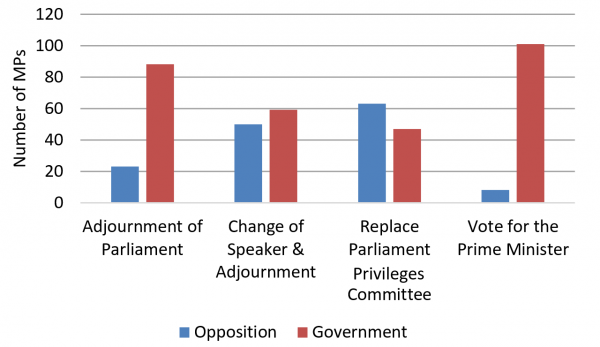 Coalitions in PNG follow the office-oriented theory, whereby the MPs and political parties form coalitions to access ministerial portfolios. The party with the largest number of MPs usually has most of the portfolios. Figure 2 show that PNC had 46 MPs and 20 ministerial portfolios under the O’Neill government, the highest number of MPs and portfolios. It is the same for the rest of the political parties that were in the coalition, except Pangu Party that had 14 MPs but only two ministries. This is because Pangu Party was in the opposition when the government was formed after the 2017 national elections and later moved to the government, putting itself at a disadvantage. 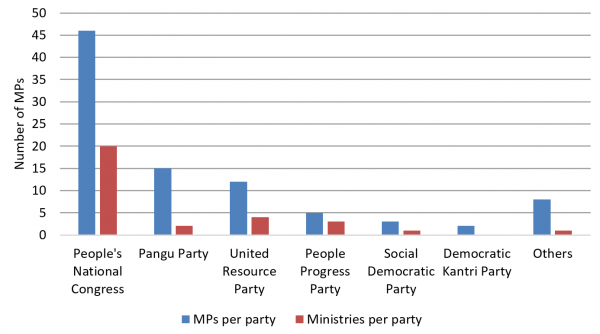 Now under Marape, the Pangu Party with 28 MPs has 13 portfolios, and PNC has 18 MPs with nine portfolios (Figure 3). However, People’s Party, Melanesian Alliance and Our Development Party each have only two ministries, even though they have 13, 6 and 3 MPs respectively. These three parties are also a construct of the crisis leading up to change in prime minister. Melanesian Alliance did not win any seats in the 2017 national elections, but seven members of Pangu Party led by Sam Basil resigned from Pangu and joined Melanesian Alliance. The other seven Pangu MPs moved to the opposition on 10 June 2019 and remained until 14 of the MPs that resigned from PNC joined them, including two from other parties. Our Resource Party also did not have any MPs until three PNC MPs resigned and revived it in June 2019. People’s Party had one MP until 11 MPs resigned from different political parties and joined it between April and June 2019. The People’s Party left the O’Neill-led coalition in May 2019. United Resource Party (URP), which did not get any portfolios, had 15 MPs but seven resigned and joined other parties, leaving eight. Marape explained that some political parties wanted more portfolios and rejected one or two portfolios he offered to them. It is possible that URP was one of those parties that negotiated for more portfolios and missed out.

Figures 4 and 5 show portfolio distributions by region under the O’Neill and Marape Governments respectively. There are four regions in PNG: Highlands, Momase, Southern, and Niugini Islands. Both figures generally show that portfolio allocations are proportionate to the number of MPs from each region. The Highlands region, with 41 MPs (6 provincial governors and 35 open MPs), has the highest number of ministries. Niugini Highlands has the least number of MPs and ministries. The Momase region had fewer portfolios than Southern region in the O’Neill Government but more under Marape. Chimbu province was allocated four ministries by Marape – the highest –, whilst Northern Province, Western Province and Bougainville were not allocated any portfolios.

Figure 4: Allocation of ministries by region under O’Neill Government 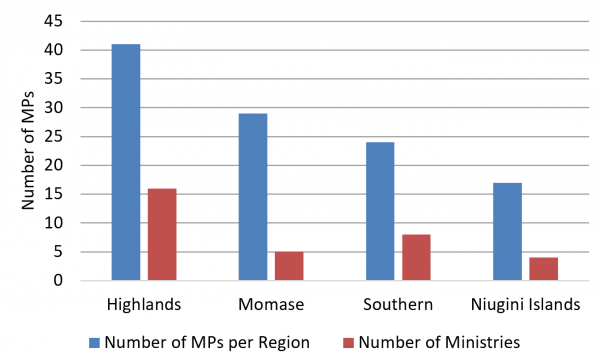 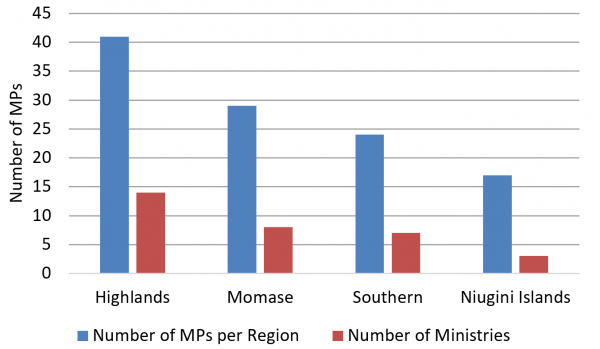 As Figure 6 shows, twenty-one out of the 32 ministers in the Marape government served under O’Neill as ministers. Nine are surviving PNC MPs whilst 12 are PNC MPs who resigned from PNC between April and June 2019. Eleven are first time ministers, and three were appointed from opposition ranks.

Figure 6: Composition of the Marape Cabinet 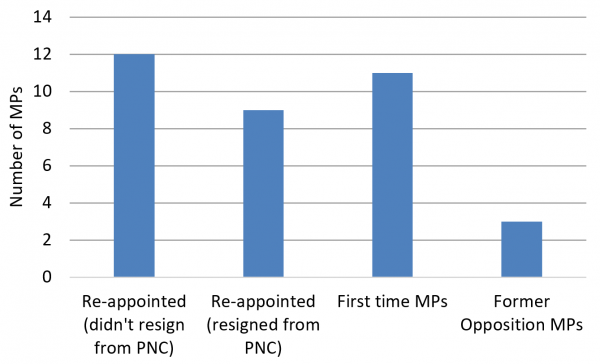 The fluidity displayed in the events leading up to change of prime minister is not uncommon in PNG. Despite critics arguing on social media that portfolios were not distributed fairly (for instance, that Northern Province, Western Province and Bougainville did not receive any portfolios), by region, the ministries are proportionate to number of MPs. As a province, Chimbu province is the biggest winner with four of its seven MPs given portfolios. As a region, Momase gained with three more ministers than were allocated under the previous government. MPs that joined Pangu had higher chances of being allocated portfolios. The biggest losers in terms of ministerial representation are URP (from four to no ministers) and People’s Party (12 MPs but only 2 ministers).