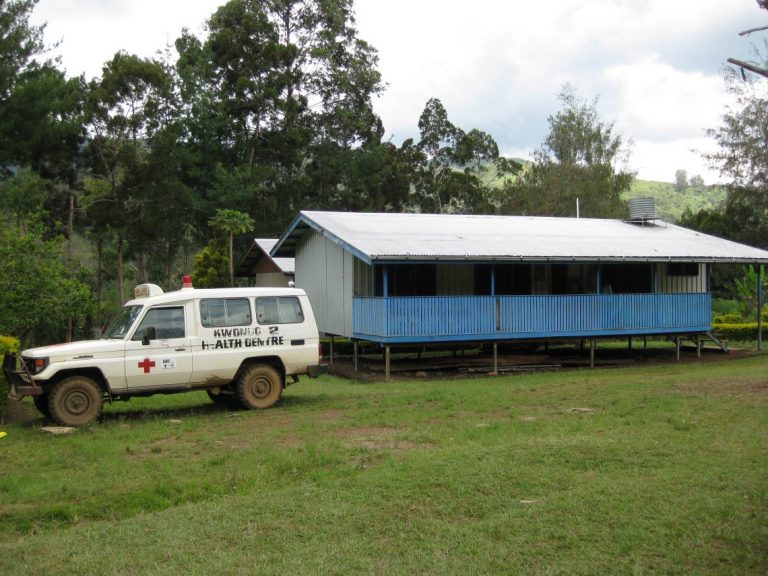 PNG’s health data: too much of a good thing – part one

The Papua New Guinea Department of Health collects routine health information through its National Health Information System (NHIS; now often referred to as eNHIS). The system is set up to gather highly and ever-more detailed monthly reports from over 800 health facilities (sub-health centres and higher) on a wide variety of conditions. In some provinces, data entry on tablets has now been introduced at the health facility level with the aim to improve the timeliness and accuracy of health statistics.

In this two-part blog, I explore the history of PNG’s health information system, and both show and explain why it may currently be too complex and extensive. I conclude with some thoughts on the way forward. This case study, with a particular focus on one country and one disease (malaria), holds many lessons for other countries.

Some of the earliest systematic health records from PNG date back to the visit of famous German microbiologist Robert Koch, who not only identified mycobacteria as a causative agent of tuberculosis but also conducted malaria surveys in the area of present-day Madang in 1900. The Australian administration subsequently gathered data from across the country for its program managers at the national level. After independence, and particularly after the decentralisation of health services to the provinces in 1983, efforts were made to strengthen and even computerise the health information system but the decentralisation limited the control of national managers over the provincial systems. Differences started emerging between the provincial systems leading to a situation where “any uniformity in systems appeared to be due to several provinces ordering their stationery from the same printing company, which provided a limited range of forms in its catalogue”. The situation changed after 1995 when, following a review of existing systems, a unified health facility reporting system based on modest adaptations was rolled out across the country.

This first standardised health information system included a single form for monthly reporting of key indicators. It was meant to reduce the reporting burden on health facilities and make it easier for provincial and national level staff to compile and analyse data. It combined the key features of seven or more forms previously in use. A folded A3 paper remains even today as the format of the monthly summary reporting tool of the PNG NHIS.

Yet, while the size of the paper has remained unchanged, the amount of information collected on the form has increased several times. More and more recording fields were added to increase the level of detail and extend the number of indicators. Reporting of malaria cases and malaria-related indicators is probably the most extreme example of how the ‘Monthly Report’ was extended over time.

Over the course of three revisions of the ‘Monthly Report’ form, the number of fields related to malaria increased from 17 fields until 2008 to 104 fields in the period 2009–2018 to 157 fields in the newest version in use since 2019 (Figure 1). In total, the latest version of the form has almost 700 data fields to fill each month – each from 800 health facilities! 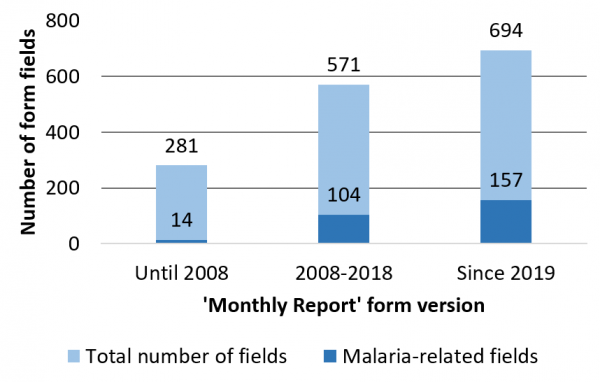 The malaria-related fields added over time increased the disaggregation of data, for example, into sex and age groups, into presumptive (‘clinical’) diagnosis vs. confirmed diagnosis (by rapid diagnostic test or microscopy), adding Plasmodium species composition for both diagnostic methods, details on the number of administered doses of artemisinin-based combination therapy, eventually even linked to the underlying method of diagnosis.

To complete the ‘Monthly Report’ form, health workers have to collate an increasing amount of data at the end of each month from tally sheets and the recently introduced ‘Malaria Register’. At the same time as the number of fields in the ‘Monthly Report’ form increased, it also became more complicated to fill, requiring the adding-up of several fields from one page to fill a summary field on another page of the same form.

For example, in the latest version, as shown in Figure 2, the total monthly number of outpatients in the category ‘Malaria cases confirmed by RDT or microscopy, males, 0–4 years of age’ (field ‘A’ shaded in red on page 1) is the sum of eight fields (A1–A8 shaded in red on page 2). (Fields A1 to A8 are filled by adding up tallies from a daily tally sheet, which itself is based on the ‘Malaria Register’ with individual patient records.) This has to be repeated five more times for other sex and age group combinations before repeating it six more times for the category ‘Malaria clinical diagnosis’. Every month. Only the field for pregnant women on page 1 does not require any adding up because there is no corresponding field on page 2.

Is all this additional information needed, and is it used? The short answer to both questions is no. Of course, more detailed data is essential to target interventions when case numbers are very low. In a malaria elimination setting, real-time individual case-based reporting is required to trigger case-based investigations. Yet, while the national malaria control program is likely to adjust its activities in the coming years from a ‘one-size-fits-all’ approach to a more targeted approach, hardly any place in PNG is close to malaria elimination or has the capacity to implement case-based investigations and response action. Hence, the programmatic adjustments are unlikely to require the level of detail currently found in the NHIS malaria data.

There is also little evidence that the increase in the amount and detail of routine malaria data has changed the direction or implementation of the PNG malaria program over the past years. And in the annual health sector review documents, the same bar charts of aggregated malaria case numbers are presented every year.

Basic NHIS malaria indicators (e.g. incidence by district) and survey results are taken into consideration when scheduling national interventions, for example, bednet distribution rounds. But, while a 2019 Health System Review found that “there is increasing use of the data at the provincial and district levels for planning and setting targets”, several malaria program reviews (e.g. in 2016 and 2019) found little evidence of malaria data being used for decision-making at the sub-national level. For example, despite half a page of the ‘Monthly Report’ being dedicated to medicine shortages, the collection of the data did not prevent (or lead to rapid mitigation of) large-scale antimalarial drug stock-outs observed in previous years.

In part two, I explore the reasons the data is not used, ask why it is collected nevertheless, and discuss what can be done to improve the situation.

Manuel Hetzel
Dr Manuel Hetzel is a Research Group Leader at the Swiss Tropical and Public Health Institute and a senior lecturer in epidemiology at the University of Basel, Switzerland. He was previously a senior research fellow and unit head at the Papua New Guinea Institute of Medical Research in Goroka.