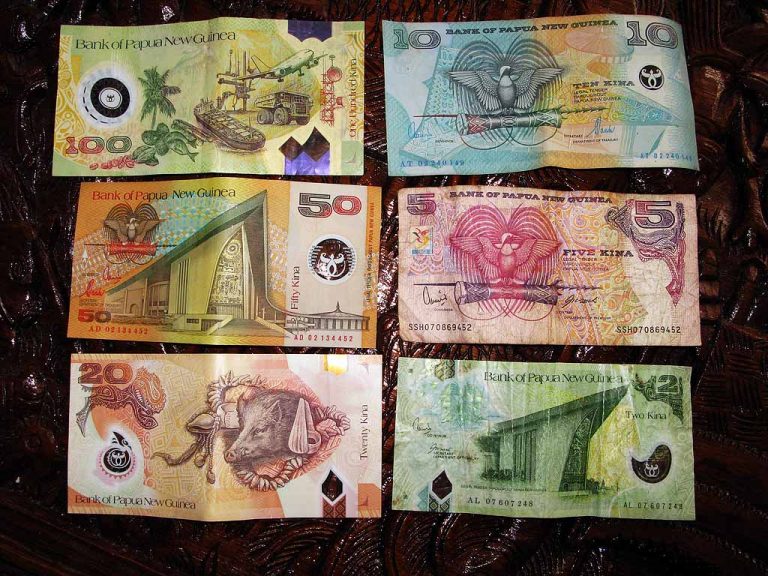 The PNG kina during COVID-19: standing out from the crowd

The world has witnessed large currency swings in recent months. In particular, countries with high dependence on resource exports have experienced significant depreciation in their currencies. A sharp reduction in global demand for commodities such as crude oil and liquified natural gas inflicted by the spread of COVID-19 has sent commodity prices crashing and affecting exchange rates.

Figure 1 shows the nominal exchange rate of a few major non-Gulf resource-rich developing countries relative to the US dollar (USD). An index equal to 100 at the start of the year is used for all exchange rates. Most currencies remained relatively stable against the greenback till the end of February, before plummeting sharply in March. This is in part due to the crash in commodity prices. In addition, in these uncertain times, investors are increasingly turning to safe-haven currencies and gold. This is leading to a further currency sell-off in emerging markets. Most currencies in the sample have depreciated nearly 20% since the beginning of January. The kina stands out – it has depreciated only by 0.5%. The other countries in this sample have floating exchange rates, but the kina has been classified as a crawling-peg (government-set) currency since 2014.

Figure 1: Exchange rates of some resource-rich developing countries against the USD   (1st January 2020 = 100) 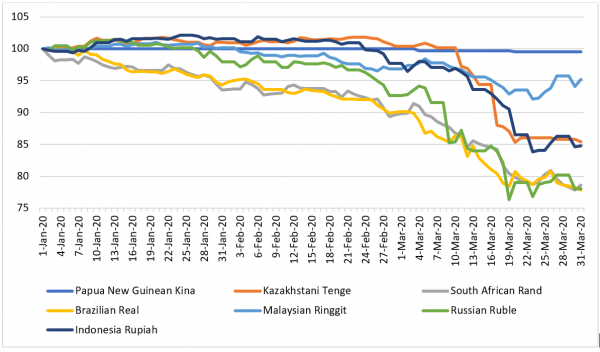 It is not just that the kina has held steady against the US dollar. With other currencies depreciating, the kina is actually appreciating in trade-weighted terms. As Figure 2 shows, this year the kina has appreciated against the Australian dollar by more than 10% and against the Singaporean dollar and Malaysian ringgit by about 5%. Australia and Singapore are the largest suppliers of PNG’s imported food and fuel sources. Assigning weights to PNG’s top five trading partners’ currencies shows that the nominal effective exchange rate (NEER) of kina had appreciated by more than 15% in March relative to the start of the year. Other currencies have gained against the greenback since, but in trade-weighted terms, the kina is still 8% up on where it was at the start of the year. 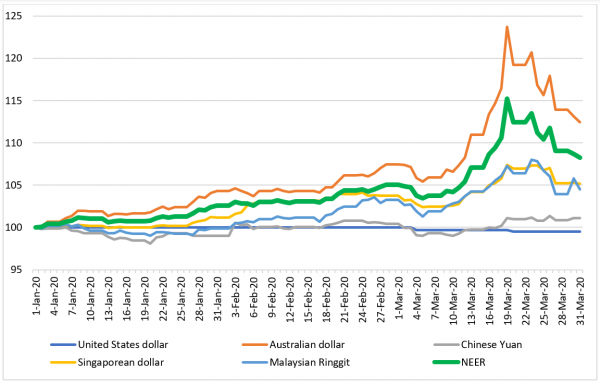 Source: BPNG and author’s own calculations

While most of PNG’s resource export prices are in USD, the nominal effective exchange rate is still important. With a lower exchange rate, domestic exporters, especially in PNG’s agricultural and fishery sector, will become more competitive in the international market. Import-substituting sectors in PNG such as manufacturing and domestic vegetables will also benefit.

Though previous studies by the IMF and ANU indicated that the kina was overvalued even before the start of the current crisis, authorities have been reluctant to devalue , often citing imported inflation as their main concern. However, supporting this artificially high exchange rate will require the central bank to keep drawing down its foreign reserves. PNG’s reserves fell from USD 2.3 billion at the end of last year to USD 2.0 billion at the end of April this year. While the use of reserves is certainly justified at a time of crisis such as this, PNG’s reserves cannot meet the full demand for dollars, and the backlog in orders is likely to grow again. Further concessional loans are expected, but they, like the ones already received, can only prop up foreign reserves for a limited period. Alternatively, the government will have to continue to ration the availability of foreign exchange – a feature of the economy since 2014, and one of PNG business’s key complaints.

Some may argue that devaluation could expose PNG to increased sovereign risk with the surge of overseas debt repayments as local currency depreciates. However, PNG’s external borrowing makes up just 37% of the overall debt portfolio, with the rest being domestic. Moreover, an increasing portion of PNG’s external borrowing is in the form of concessional loans from development partners, which enjoy low borrowing costs and long repayment periods. Hence, the threat of sovereign risk as a result of devaluation is unlikely.

An overnight sharp devaluation of kina would be inadvisable. But action is needed. The government needs to focus not on shielding the kina, but on supporting the economy. PNG cannot be so different from other resource exporters that it can avoid the need for depreciation.