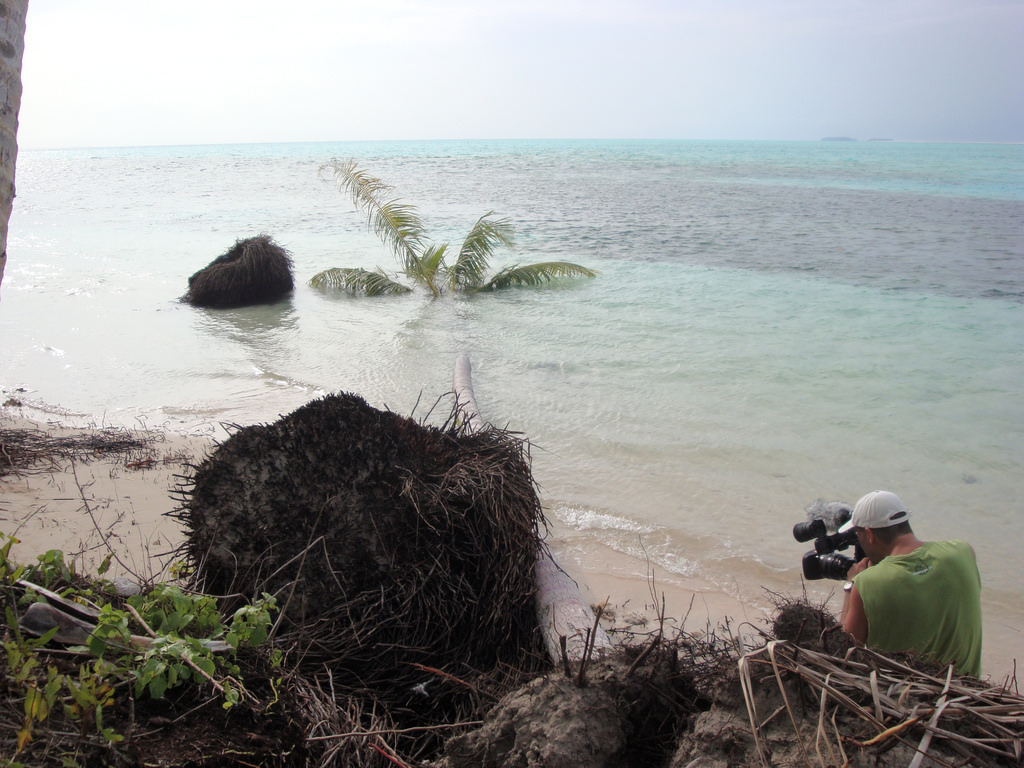 The Government of Papua New Guinea (PNG) has vowed to use its hosting status of the 2018 Asia Pacific Economic Cooperation (APEC) summit to put climate change at the forefront of the regional agenda. The move supports broader attempts by Pacific Island leaders to take a lead role on climate change. This includes calls to halt Australia’s Adani coal mine and Fiji’s co-hosting of the UN Climate Change Conference (COP23) in Germany, dubbed “the Islands COP”.

PNG has good reason to take a leadership role in facilitating dialogue on climate change. A recent Caritas report found that in 2017 alone, 2000 households across 30-35 coastal communities in PNG were displaced by rising sea levels, flooding, and erosion.

Projections made by the Pacific Climate Change Science Program (PCCSP) suggest further effects of climate change, including increasing intensity of cyclones, rising temperatures, changing rainfall patterns, sea level rise, increasing ocean acidification, and pressures on food security. As part of the Engaging Communities and Government in Biodiveristy Conservation and Climate Change Adapation project, the authors conducted 15 interviews with provincial government representatives in Madang and Goroka in October 2017, which revealed a number of other impacts.

The majority of Papua New Guinea’s 7.9 million population live in rural areas and approximately 75% of households depend on subsistence agriculture. Impacts such as severe drought, frosts, heat and changing rainfall patterns have already reduced yields of staple foods (including sweet potato), and other garden produce and cash crops.

Women and children, who predominantly undertake tasks such as gardening, collecting water and firewood, are most affected. Representatives of Eastern Highlands Province say that changing weather patterns are now posing a threat to maternal health as “[gardens] are not producing as much and women have to work twice as hard to grow their sweet potato. They work extra hard and they’re pregnant – it’s one reason why they result in premature births” (anonymous interview, 5/10/17).

For coastal communities, rising sea levels are a major concern. In a low lying area of Madang Province, for example, provincial government representatives say that between 2010 and 2017 they have observed changes in sea level, based on proximity of the sea to the main road. “In 2010, the sea was 15 km from the road. Now it is 5 km or 6 km” (anonymous interview, 4/10/17). Although the provincial government financed the development of a sea wall, resourcing issues reportedly stopped completion. Systems of customary land tenure also restrict communities from moving inland and risk initiating land disputes.

A major challenge facing Papua New Guinea is how to generate economic development while preventing further environmental damage. With almost 40% of the population living below the national poverty line, opportunities to pursue economic development and supporting infrastructure are highly sought-after. The PNG Government’s support for large scale development projects (e.g. mining and gas), could be perceived as being at odds with its recent commitments to facilitating regional dialogue on climate change. Many communities across Papua New Guinea have already experienced the negative social and environmental costs of large development projects. The impact of the minerals and energy sector in particular is well documented, including high profile cases of environmental disaster (Ok Tedi), armed conflict (Panguna) and human rights violations (Porgera).

Furthermore, climate change is an amplifier of existing social and environmental vulnerabilities. In Madang Province, there are concerns that waste disposal from the Ramu Nickel mine has polluted the main drinking water supply for communities in Bundi. This comes at a time when declining rainfall and rising temperatures have affected food and cash crops.

Communities threatened by rising sea levels in Madang province will also be among those directly affected by the new Pacific Marine Industrial Zone Project (PMIZ). Funded by Exim China Bank, PMIZ will establish up to ten tuna canneries and enhanced port facilities. Construction of the project was initially delayed due to a lengthy legal battle with Madang environmental groups concerned about depletion of fish stocks, oil spills, polluted drinking water, and increased migration of settlers. Furthermore, destructive fishing practices conducted by international fishing vessels (such as drag netting) is destroying the coral reefs that provide habitat for marine life, and eco-tourism opportunities from diving and snorkelling.

Aside from the direct flow of revenues from major development projects (such as royalty payments and compensation), communities often use these projects to create business “spin-offs”. These activities however, are not without their own environmental consequences. Representatives of Eastern Highlands Province are concerned that communities located near the Crater Mountain gold mine will be tempted to log their forests to capitalise on the mining company’s need for timber supplies. In addition to the social and environmental impacts of mining, this will place further pressures on biodiversity in the area and increase the risk of floods and landslides.

Alternative livelihoods such as agriculture, community conservation projects, education and eco-tourism can present viable and sustainable substitutes for some communities. Yet provincial government representatives say that this is not always possible for some communities, especially if they lack access to basic resources and services: “remote areas that have difficulty accessing cash will be in favour of the [immediate] money” (interview, 5/10/17).

PNG will spend 800 million kina ($330 million) on hosting the APEC summit, which along with Australia’s commitment of $48 million is money that could be better spent on basic health and education services for the population. Given that PNG will host the summit regardless, the Government should be commended for its commitment to using the opportunity to shine a spotlight on climate change in the region. The country is already experiencing severe environmental threats and human development challenges. While it is arguable that Pacific Island countries do not hold the political power to match Australia, many Pacific Island leaders are showing that they can make climate change an essential precondition for successful foreign policy in the region. As the largest of the Pacific Islands countries, Papua New Guinea has a vital role to play in furthering this agenda.