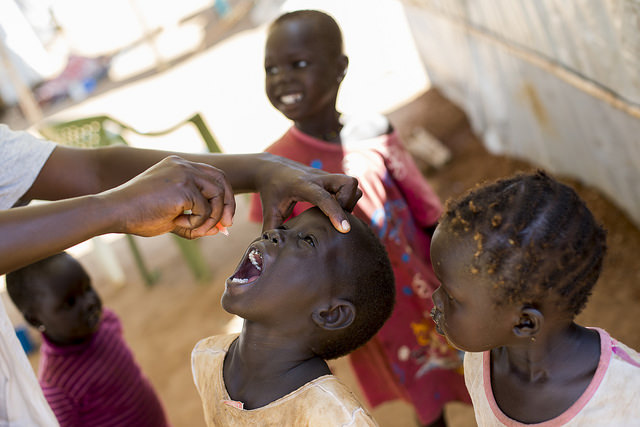 Recently announced cuts to Federal Government budget allocations for routine immunisation and polio eradication have caused concern, particularly among those committed to the global efforts to eradicate polio. Polio is now a threat only in Afghanistan, Pakistan and Nigeria. This presents an opportunity to eradicate polio globally through continued vaccination campaigns. But the question does not end there.

While the Government delivered on its 2014 commitment to provide $20 million to the Global Polio Eradication Initiative (GPEI), it announced on 22 September that cuts would be made to the remaining $80 million in promised funding. Eight million dollars have been cut altogether from this amount due to wider reductions in aid spending announced last December, and the remainder divided equally between polio eradication and the World Bank’s routine immunisation work in south-east Asia and the Pacific: the additional commitment to polio eradication was thus reduced from $80 million to $36 million.

At stake here is more specifically the meagre amount that Australia contributes towards foreign assistance. At current and planned levels of expenditure, the level of our foreign aid commitment will fall to 0.22% of GDP by 2017, down from 0.32% in 2014. That amounts to 22 cents in every $100 of our spending as individuals and a total annual expenditure of less than $4 billion: this is approximately the amount the Victorian government plans to spend on removing level crossings over the next four years and is a derisory contribution to the alleviation of poverty in the region from one of its wealthiest countries.

Although both major parties previously committed to increasing foreign aid to 0.5% of GDP (still less than the international target of 0.7%, achieved now in the United Kingdom), this commitment has faltered and Australian aid is now at its lowest point in the 60 year history of expenditures on foreign assistance.

Decisions to cut aid have very real implications for objectives that matter to Australians, including the eradication of polio and support for immunisation systems. The $100 million pledge over five years was at least consistent with comparable countries; reduced now to a total of $56 million, the contribution is well below the level of international funding required to eradicate polio. Confirmed contributions to the GPEI during 2014-2018 stand at US$102 million from Canada and US$172 million from Norway. Rotary International alone has committed US$175 million.

This remains the critical issue: the strengthening of health systems to deliver multiple benefits. All expenditures should be made with this in mind. Routine immunisation and polio eradication are both, in fact, susceptible to delivery in ways that fail to strengthen health systems. When delivered as stand-alone vertical programs that are implemented outside the routine health system, vaccination programs can potentially create a parallel system that acts to drain resources (funding, staff) from the broadly based health system for a single health activity. The longer term solution is to invest — both foreign aid dollars and domestic resources — in the delivery of a full package of basic health care, including vaccination, so that prevalent diseases can be controlled in the longer term, and some eradicated.

Polio eradication requires a concerted effort that will not be helped in the least by the cuts to the Australian aid budget. Maintaining the wider work of building health systems that can address the ongoing issues of communicable disease in a reliable and consistent manner will support this and other objectives.

Barbara McPake is the Director and Peter Leslie Annear is Head of Governance and Financing at the Nossal Institute for Global Health at the University of Melbourne School of Population and Global Health.

Barbara McPake
Barbara McPake is Director of the Nossal Institute for Global Health at the University of Melbourne. She is a health economist specialising in health policy and health systems research. Barbara has extensive research degree supervision and other postgraduate teaching experience and extensive international experience in health systems research and policy analysis and advice to UN agencies and low and middle income country governments.