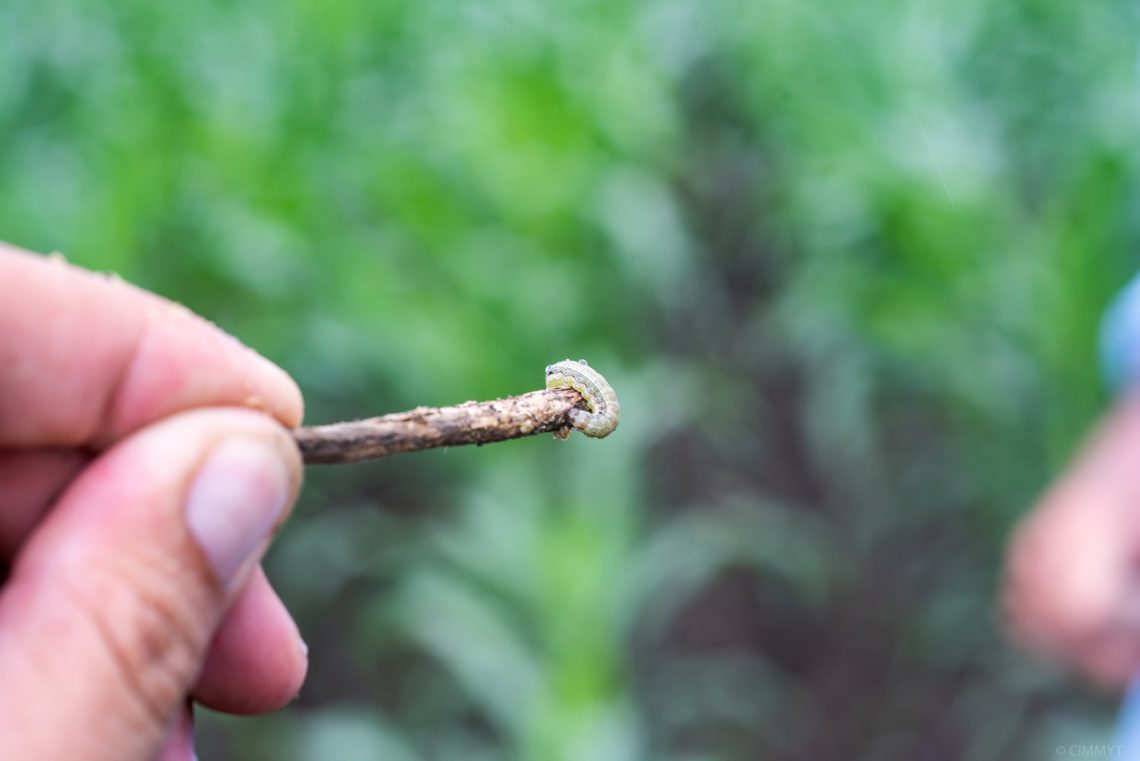 Fall armyworm in Papua New Guinea: how big is the risk?

By Michael Bourke and Sim Sar

Fall armyworm (FAW) is major pest of maize (corn), sugarcane and rice. This insect pest was reported in Western Province in early 2020. Maize is widely grown up to 2500 m altitude in PNG as a subsistence food crop and for sale in fresh food markets. It is particularly important in some locations with a seasonal dry climate, such as parts of Eastern Highlands. Maize is grown for stockfeed at Umi in the Markham Valley and at Gusap in the Ramu Valley. Maize can be an important food following a disaster in PNG because of the relatively short period to crop maturity and high food value. Widespread distribution of maize seed has been recommended if food shortages develop during the COVID-19 epidemic in PNG. Their value as an emergency food crop may be reduced if FAW attaches to maize.

Sugarcane is one of the most widely grown food crops in PNG, with 99% of the rural population growing the crop and consuming the juice. Estimates of consumption range from 35 to 60 kg of cane per person per year. It is also grown commercially at Gusap in the Ramu Valley to produce refined sugar for the domestic PNG market. Thus fall armyworm has the potential to cause significant damage to a number of important food and commercial crops in PNG.

Fall armyworm (Spodoptera frugiperda or FAW) is a moth pest native to tropical and subtropical regions of the Americas. The term “armyworm” can refer to several species including Spodoptera litura, the species present in PNG. The term describes the large scale invasion of crops. The destructive larval stage feeds and damages their hosts. As noted, it is primarily a pest of maize, rice and sugarcane. However, it has a wide host range and is capable of feeding on more than 350 plant species, including beans, sweet potato, banana, orange, pawpaw, tobacco, strawberry, mango, capsicum, watermelon, guava, tomato, ginger, cabbage, cauliflower, chilli, coffee, mandarin, cucumber and peanuts.

FAW has spread to much of Africa, South Asia, Southeast Asia and now to PNG and northern Australia. In Africa it has spread rapidly. It was first detected in 2016 and is now present in 28 countries, with tens of millions of hectares of maize infested. There are two main types: one which prefers to eat maize and sorghum crops, while the other prefers to attack rice.

Staff from PNG’s National Agricultural Quarantine and Inspection Authority collected the pest from young corn plants at Mari Village and Daru township in February 2020 and it was confirmed as Spodoptera frugiperda. In the Strickland-Bosavi area of Western Province, Dr Russ Stephenson has introduced several food crops, including maize and beans, as part of a Rotary child nutrition project. He recently received reports that plots of introduced maize and beans have been damaged by the pest (pers. comm., April 2019). The pest is likely to spread rapidly in PNG. In Australia, it was first detected in the Torres Strait islands in late 2019, but has moved rapidly to locations in central and southern Queensland, and by April 2020 to a number of locations in the Northern Territory and northwest Western Australia.

It is likely that FAW will cause significant damage to maize crops in PNG, particularly commercial crops. Other crops at risk from FAW damage include rice and sugarcane.

Modelling of climate suitability of FAW show that PNG is extremely suitable for the pest to thrive. Natural enemies may eventually control fall armyworm to some degree, as has occurred in other Spodoptera species. However, there is likely to be a time lag, perhaps of some years, before the natural enemies of FAW arrive and reduce their number. This has been the experience with some other pest problems in PNG, such as the banana leaf roller.

It is interesting that one study of the impact of FAW on smallholder maize fields in eastern Zimbabwe concluded that:

…our best estimate of the impact of FAW damage on yield (11.57%) is much lower than what these studies reported. Although our study presents limitations, losses due to FAW damage in Africa could have been over-estimated. The threat that FAW represents for African smallholders, although very real, should not divert attention away from other pressing challenges they face.

Experience from Africa showed use of synthetic chemicals to control the pest is rarely economical since FAW has developed resistance to conventional insecticides. The pest has some predators and natural enemies, including a number of wasps. Predators of FAW include ground beetles, earwig, birds, lizards and rodents.

The smallholder mixed cropping system in PNG may minimise the impact of FAW. A number of cultural control measures have been suggested in this Pacific Pests and Pathogens Fact Sheet. These include using high quality corn seed and to interplant corn with cassava, peanuts or cowpeas.

Fall armyworm has the potential to cause significant damage to a number of important food and commercial crops in PNG, particularly maize (corn), but also sugarcane, rice and other food crops. Based on experience in Africa and now Australia, it is likely that the pest will spread quickly throughout PNG and possibly to nearby Melanesian nations. The pest may initially cause a lot of damage as its natural enemies are absent in PNG. However, over a time period of some years, there may be a reduction in damage as the natural enemies of the pest arrive. There is much that is unknown about how much damage this pest will do to crops in PNG and how this will change over time. Its arrival in PNG at about the same time as COVID-19 and African swine fever is unfortunate.

Michael Bourke
R. Michael Bourke is an honorary associate professor in the College of Asia and the Pacific at the Australian National University.

Sim Sar
Dr Sim Sar is an entomologist at the National Agricultural Research Institute of PNG.