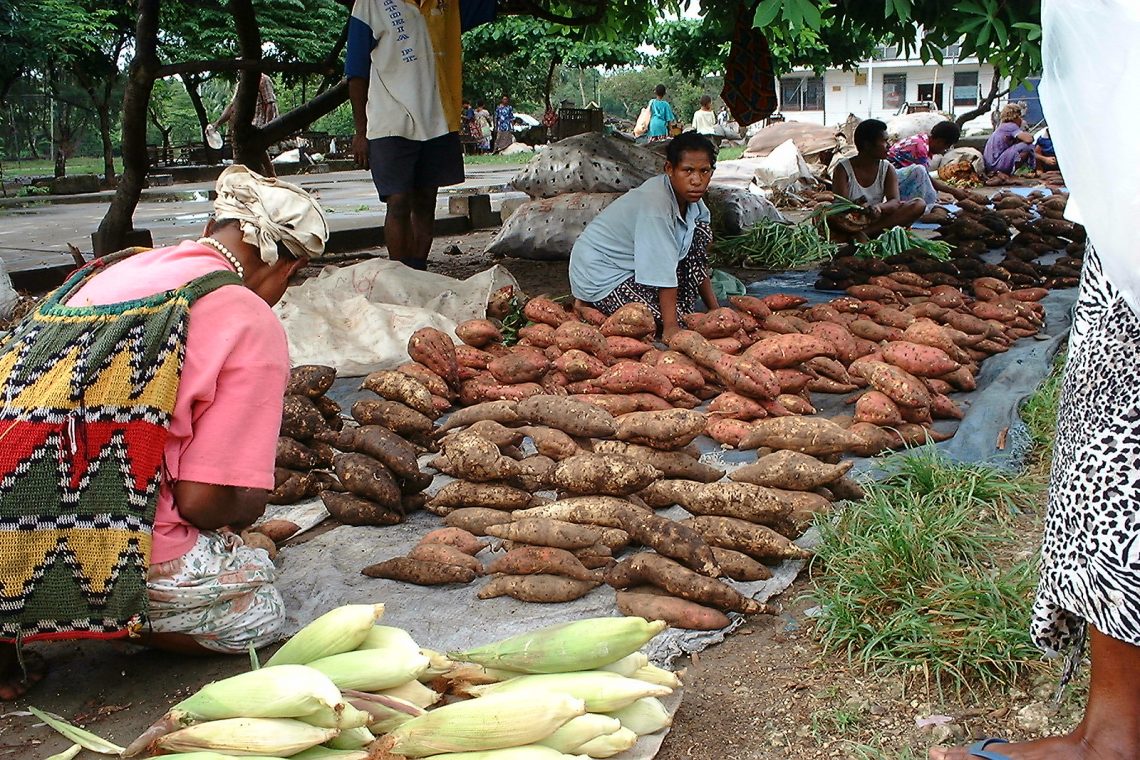 Potential response to COVID-19 in PNG: support for food production

The COVID-19 epidemic in Papua New Guinea has the potential to have a significant deleterious effect on food supply and human nutrition for rural villagers (about 80% of the population), as well as those living in urban and rural non-village locations. Its impact is now compounded by the arrival of a major animal disease and an insect pest that causes significant economic damage to 350 plant species worldwide – African Swine Fever and the Fall armyworm respectively. African Swine Fever may reduce the number of pigs by about half, causing an estimated economic loss of US$50 million, as well as loss of an important source of protein and fat.

COVID-19 is likely to reduce the supply of both fresh garden food and traded foods through:

Reverting purely to traditional food sources could undermine the nutrition gains made through the introduction of more diverse diets including foods with a higher content of protein, oil and fat.

The impact on food supply is likely to vary considerably between locations within PNG as there are huge differences in resilience to external shocks. For example, the 2015-16 drought caused inconvenience to villagers on New Ireland, as many schools were closed and people had to drive or walk longer distance to obtain drinking water. At the other extreme, villagers in the Strickland-Bosavi area of Western Province suffered severe food shortages, with a significant increase in the death rate. The most vulnerable people are those in isolated locations with poor access to markets and services.

Food production could be supported at both the household and commercial levels, as follows.

Support for food production at the household level

The focus would be on increased backyard gardening or home production of two priority crops judged to have immediate higher production and nutritional benefits – corn (maize) and beans. Corn grows well in most of PNG up to 2500m altitude. Common beans grow well over an altitude range of 400 to 2400m.

The support would be through provision of appropriate seed and agronomic advice. The geographic focus would be in urban centres, peri-urban locations of major centres, and in selected rural locations, including in the central highlands, highland fringe and other locations where people are more vulnerable. Delivery agents could include defence or commercial charter (to get necessary seeds into the country) and then road, sea or air transport to move planting material to rural locations. Almost 70% of rural PNGeans live within 15km of a national road (53% live within 5km; 10% within 5-10km; 6% within 10-15km). Many of these people live near a provincial or local road that links to a national road. Thus about 30% of the rural population do not live near a national road, with their access to markets and services by local roads, sea, river, walking or aircraft only. Delivery of planting material and advice to those in more remote locations is both expensive and logistically more difficult.

We propose support from the government, business, NGOs, churches and community sectors. In the cities, this could be done in partnership with city authorities (e.g. the National Capital District Commission and Lae City Authority).

Corn is fast maturing (80-110 days depending on altitude); it has a high food value; the seed is relatively easy to store and transport; it is widely grown and consumed in PNG; and it grows well up to 2500m. Open pollinated types are the most suitable for PNG conditions, but the supply of suitable varieties in PNG is very limited. Hybrid corn produced in north Queensland is suitable for most PNG conditions and seed is currently available (April 2020). Air transport would be required to move seed from Cairns to PNG urban centres. Importantly, road, river and sea transport would be required to move seed into rural locations, possibly from provincial or district authority hubs.

The pods of common beans are eaten when the seed is partially dry in PNG, so it has a higher protein content than young green beans. Beans have a number of advantages, including a relatively short time to maturity – 60 days for dwarf types from Terranova, New Zealand – and seed is relatively easy to store and transport. Beans have a high protein content and the components of protein (amino acids) complement those in corn. Common beans are widely consumed in PNG and they grow from 400 to 2400m altitude. Some common bean seed is available in the Hides area in Hela Province, and there is a small private collection at Aiyura. Production could be increased in the Hides area and at certain education institutions.

In coastal and other locations under 400m, seed of other types of beans would have to be supplied, including snake bean, cowpeas and mung bean. At very high altitude locations (2400 to 2800m), broad beans would be the best type of bean for villagers to grow.

Increased food production on a larger scale for sale or distribution

Food would be made available to those living in towns, medical facilities, resource extraction locations, correctional and education institutions. This would be done by semi-commercial farmers in key locations, including Hagen Central, Asaro Valley, Markham Valley, Ramu Valley and the Gazelle Peninsula. These would be supported by provincial Division of Primary Industries staff, larger agricultural corporations (such as Rumion Piggery, Ramu Agri-Industries, Trukai Industries, Mainland Holdings), agricultural supply groups (Farmset, Goodman Fielders), church groups, NGOs and transport companies. Support could be provided by different bodies, including Pacific Adventist University, Christian Leaders Training College, Banz and Kabiufa Adventist Secondary School, which is near Goroka. Some educational facilities could be used for large scale food production, if students had been sent home.

Michael Bourke
R. Michael Bourke is an honorary associate professor in the College of Asia and the Pacific at the Australian National University.

Matthew’wela Kanua
Matthew’wela B. Kanua is Country Director of the Market Development Facility PNG. He is a former Secretary of the PNG Department of Agriculture and Livestock and a leader in Papua New Guinean agriculture and rural development.