RAMSI: finding the road to peace and reconciliation 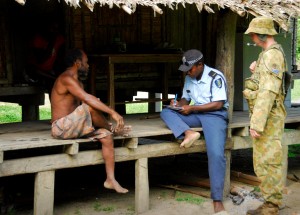 Her story flows. She knows what she wants to say. She talks about what happened to her and her family during the Tensions with care, consideration and purpose. There is little need for further questions as a clear picture unfolds. It’s the future that is of more concern to her. She asks: “What will happen now?”

Sitting on a wooden veranda attached to a house made from local materials, the woman is a victim of the Tensions. She is being interviewed by my colleague from the Truth and Reconciliation Commission (TRC), established to ‘promote national unity and reconciliation’ in post-conflict Solomon Islands. Both women hunch over a Dictaphone in an effort to record the story over the noise of the waves crashing onto the large pebbles which form the beach of the Weather Coast, the southern coast of Guadalcanal.

This interview was one of almost three thousand statements collected for the TRC. Teams of statement takers travelled the provinces by sea, road and foot, equipped with recording devices and coloured forms, to talk to victims, survivors, witnesses and ex-combatants of the conflict. The information was passed on to the research manager and commissioners in Honiara, where along with other sources, it was analysed and collated into a final report.

Arriving in villages and introducing themselves to the leaders and chiefs, statement takers were often met with suspicion. Public meetings were spontaneously held, and questions asked. Many villagers did not know what the TRC was, and did not want to talk about the past. They asked why the government wanted to take their story, and what would come of it. There was fatigue and distrust of more people coming to take more information. They wanted something in return, some form of restitution. All the statement takers could offer was the promise that the information would be used for a report for the government, including recommendations for the future. This encouraged participation – villagers wanted their voices heard by their government.

Focussing primarily on Guadalcanal and Malaita, the statement takers listened to accounts of the past: of the fear; the first time hearing gun shots; the fleeing to Honiara, to the bush, or to other provinces; the accusations of spying; the violence; the loss of houses, gardens, everything. While people told stories of the past, they wanted to document their needs now: the effect of the Tensions today; the ongoing grief and trauma; the need for development in the rural areas; for youth employment; for regular or improved shipping and transportation.

Ten years after RAMSI arrived in the Solomon Islands, their mandate to restore law and order has been fulfilled, yet much more lies ahead for reconciliation and building a durable peace in the country. While guns have been removed and government departments strengthened, for many, the grievances that led to the conflict remain, and their circumstances have not improved. The conclusions in the TRCs final report noted:

The final report was officially handed over to the Prime Minister in February 2011. Since then it has not been debated in parliament or released to the public, despite the TRC Act requiring this. In April this year, after fourteen months of delays, the editor of the report and long term resident of Solomon Islands, retired Bishop Terry Brown, unofficially released the final report electronically, saying that:

“The report… gives proper recognition to the victims of the conflict whose stories should be heard. It is not good enough to forgive the perpetrators and forget the victims…”

The need to acknowledge the victims echoes one of the conclusions of the final report:

“The state failed in its obligation to protect the victims and has the obligation to offer them adequate reparation. A policy of “let bygones be bygones”, as pursued by former militants and/or political leaders, would mean to victimize the victims again by disdaining their suffering.” (p. 743)

Yet the ongoing delay of the official release of the final report, and therefore the neglect of the recommendations, threatens to do this, and is itself symbolic of a major challenge of working towards peace and reconciliation today.

After working for the TRC for one year, as part of the research team, I began doctoral research examining the TRC as a mechanism for peacebuilding in post-conflict Melanesia. I have been privileged to not only talk to many victims and survivors and ex-combatants of the Tensions while working at the TRC, but through my academic research, to also interview the TRC’s staff and stakeholders about their views of reconciliation and peace in the country.

The message being conveyed to me has been clear. While RAMSI has been widely welcomed and appreciated, its work and achievements have not, indeed could not, build peace and reconciliation across the country. Peacebuilding and reconciliation need to be locally driven, supported and encouraged by the government, located at the village level, and directly include the victims of the conflict.

In a country where the majority of the population live outside of the capital on customary owned land, much potential lies in building on and enabling the existing strengths in Solomon Islands communities and local approaches to conflict management. Solomon Islanders have shown their resilience, tolerance, and willingness to work together and reconcile. Across the islands, there have been locally instigated and church lead reconciliations, and throughout the TRC’s work there was willingness to ask for, and offer, forgiveness.

As Solomons moves towards a post-RAMSI future, reconciliation and peacebuilding need to continue in ways that are meaningful to Solomon Islanders. From my research thus far, this can occur on two levels:

Firstly, on an interpersonal and community level. Restoring relationships after conflict is something Solomon Islanders can do well, on an interpersonal level – between families and communities, and on an intra-personal level – as I heard many times, it happens in the heart. According to many Solomon Islanders, this inter-personal reconciliation, often involving exchange, meetings and feasts, is effective. It is not, however, something that can be solely achieved at high-level negotiations or symbolic representative reconciliation events – the people involved in the dispute must be involved in its reconciliation. These processes can be supported or facilitated, but they must be led by those involved.

Secondly, reconciliation and peacebuilding can be promoted on a national scale. While the TRC was an attempt to do this, its official release and recommendations are imperative for its work to be meaningful. The Tensions provide a particular challenge to usual localised reconciliation processes, as the government itself was implicated as an active party to the conflict as well as failing to provide adequate security to its citizens. A reconciliation process which involves active input from the government must therefore be offered. On this broad scale, acknowledging the TRC report, disseminating its results in a village-friendly format and addressing the recommendations, provides a potential avenue for the government to do this.

As we look toward a post-RAMSI Solomon Islands, the government’s next move in regard to the TRC report and wider peace and reconciliation will be telling. The people of Solomon Islands want to heal and move forward, yet they require government participation and support, and leaders committed to building peace across the country.