RAMSI: moving forwards by asking the right questions of the past 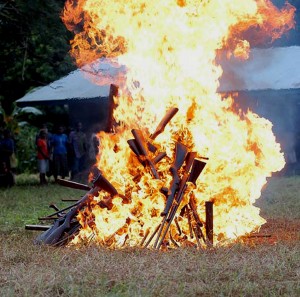 Assessing RAMSI is a difficult task. There is no equivalent intervention force in the Pacific against which to compare it. Although a Pacific Island Forum initiative, the venture has always been dominated by Australia and New Zealand. The RAMSI agenda lacked direction in the first few years and grew over time into the three ‘pillars’ assistance programme, focusing on: the machinery of government; law and justice; and economic governance. We need to question if these were the right ‘pillars’, who chose them, and what else could have been done as part of RAMSI to create a viable and enduring Solomon Islands society and economy?

We also need to go back to 2003 when the RAMSI concept was formulated and enacted, and to the dangerous situation that had developed since 1998. The Solomon Islands Government was lurching along dealing with rival militia forces, which led to the expulsion of tens of thousands of peaceful citizens from their homes, the deposing of a prime minister, and the capital city falling under the control of militia. The Solomon Islands had become a failing state and three prime ministers had pleaded with Australia to intervene before catastrophe occurred. The saving grace for the nation was that the dispute was largely isolated to two major islands, Malaita and Guadalcanal, and that the great majority of the people relied on subsistence agriculture and fishing to feed their families. Breakdown of the central government was a nuisance in rural areas, but not in the same way as it would be in a nation that was more reliant on the cash economy. While there was suffering because health, education and other government services either were unavailable or had declined, if one stands back and looks at the ‘tension-related’ deaths which occurred during 1998-2003, they probably number around 244 (Truth and Reconciliation Commission figure), with a larger number who died from lack of access to health services; still no more than 2,000. Compare these figures with the estimated 20,000 deaths in Bougainville (1988-1998) and a reported 200,000 in East Timor (1975-1998). Although there were some horrific deaths and crimes of violence, by international civil distress circumstances, the ‘Tension’ years in the Solomons were moderated by dispute etiquette that reached back into pre-colonial social mechanisms, mixed with Christian tolerance and other changes since colonial intervention began in 1893.

Between 2003 and 2006 RAMSI was fairly cocky about its success. In the initial phase guns and ammunition were removed with speed, and most Solomon Islanders breathed a sigh of relief. It was not pleasant to be threatened by thugs with high-powered rifles and the appreciation levels for the Participating Police Force (PPF) and the army contingent was overwhelming. RAMSI also began to work out a long term agenda to deal with getting the apparatus of government working again. Unexpectedly, 2006 was RAMSI’s worst year and the organisation, through the PPF, must bear a great deal of the responsibility for the riots in Honiara after the election of Snyder Rini as Prime Minister. These were not the first riots in Honiara, but they came when the Royal Solomon Islands Police Force was weak and the PPF were largely in control. The PPF’s way of dealing with social tension was very Australian, and they lost control of the situation. I don’t think they had any idea of the capabilities of a Solomons mob moving fast. I suppose it’s too much to expect RAMSI ever to admit to this major failing; but the disturbance probably did some good as it caused RAMSI to quietly reassess its overall strategy. Local cultural sensitivity had never been a strong point; however, from 2006 onwards there was more of a realisation that what works in Australia or New Zealand might have to be modified for the Solomons. A stronger and more focused RAMSI emerged. I have always thought that more rural training/immersion was needed for short-term expatriate public servants who have a theoretical knowledge of what should work but no understanding of what actually happens on the ground. It’s hard to insist that this is necessary as it runs against the secondment standards they expect (hardship is not in their vocabulary), but attending a two-day training at a resort is not the same as a village stay.

One thing that the Solomons gained from RAMSI and other aid organisations is accumulated statistics on all aspects of life in the nation. An interesting mechanism with which to rate RAMSI is their People’s Survey, which has operated between 2006 and 2013, and is run by independent consultants. RAMSI is justly proud of its success as depicted in the People’s Survey. Support for RAMSI has remained consistently high, averaging over 86 percent between 2006 and 2013.

The 2013 survey results have been published recently; there were 3,405 respondents, and they afford a range of other interesting insights into Solomon Islands life after ten years of RAMSI. Twenty-four percent of respondents had partners from a different home province, a figure which rises to 50 percent in Honiara; an indication of growing social complexity. Many people still insist on identifying Solomon Islanders by island or province of origin, when in fact the mix is changing fast and eventually a national consciousness will emerge, overriding present regional allegiances. Health services were viewed as generally improving, although there were problems with staff and shortages of medicines. The same patterns of improvement were seen with education and the Royal Solomon Islands Police Force. A majority (54 percent) thought that the national government was performing at a satisfactory or better level, but 66 percent thought that provincial governments were not performing well. The reported main cause of conflict in communities came from alcohol, drugs and kwaso (potent home brewed spirits). One interesting statistic is that 59 percent owned a mobile phone, which shows how fast the nation is changing, even in rural areas.

It is easy to criticize RAMSI. Even though a very large amount of money was made available, RAMSI was never intended to be a de facto national government and had to choose its priorities in a quest to strengthen the overall apparatus of government. While we can question the priorities chosen, in the end the organisation can only be judged on its implementation of its stated agenda. The RAMSI agenda concentrated on a military presence, rebuilding the police force, maintaining the judiciary, stabilising and expanding prison services, and a concentration on the machinery of government, particularly finance, customs and the Electoral Commission. The military component outstayed its welcome and one wonders what the Australian agenda actually was in maintaining such a large force for so long. In the early years they were much more visible; more recently the military was effectively confined to barracks. My impression is that RAMSI was using the Solomons as an Australian military training ground, not because of any real need to maintain troops.

During the ‘Tension’ years the police force was compromised by its collaboration with the Malaitan militia. It was dismantled and rebuilt, which was sensible, but some of the priorities were wrong. Accommodation was poor: the Rove Police Quarters and the accommodation at Central Police Station were squalid to say the least; so why would high quality staff want to join the RSIPF? Eventually, better housing was constructed, but in my mind this should have been part of the initial package when rebuilding the police force. RAMSI’s priorities left major areas like health, education and development of infrastructure to the national government.

In my assessment, there were several major factors which caused the ‘Tensions’: migration from Malaita, the most populous province; lop-sided development on Guadalcanal; problems over urban development; un- and underemployment and resultant social pressures; and rogue leaders who inflamed less educated people. Arguably, unless these pressure points can be released, trouble of some sort will come again. The government has tried to get large scale economic development moving on Malaita but all attempts have failed; who can blame young Malaitans for wanting to move to places where they have better chances of employment? No one has solved the issues of underdevelopment on Guadalcanal, except in Honiara. Providing more infrastructure on Guadalcanal and Malaita could well have been seen as a RAMSI priority, or they could have been more involved with negotiations with other funding agencies. And as for rogue leaders, well we can’t blame RAMSI for them and RAMSI has tried to strengthen the electoral and parliamentary systems.

The Solomon Islands economy is buoyant. Although the over-exploitation of the forests has been a long-term economic disaster, investment confidence has returned over the last ten years. RAMSI can take part of the credit for this.

Overall, RAMSI does need to have consistent policies and RAMSI has deep but not endless financial pockets. However, perhaps, as RAMSI is devolved into High Commission aid programs it is time to look back ten plus years and return to basics. Ask the question: what were the central elements in what went wrong and could it all reoccur again? Should RAMSI have revised its policies more, once the basic pillars were standing without the need to be further propped up? Now that the findings of the Truth and Reconciliation Commission have been released (albeit it not officially), should RAMSI be assisting to implement the recommendations? Although Solomon Islanders are overwhelmingly thankful to RAMSI and supportive, we can still question its policy choices. We must think ahead over the next ten to twenty years to ensure the creation and maintenance of a prosperous and just society in the Solomon Islands.

Clive Moore is Professor of Australian and Pacific History at the University of Queensland. His involvement with Solomon Islands goes back to 1976. In 2004 he published ‘Happy Isles In Crisis: The Historical Causes for a Failing State in Solomon Islands, 1998-2004’.