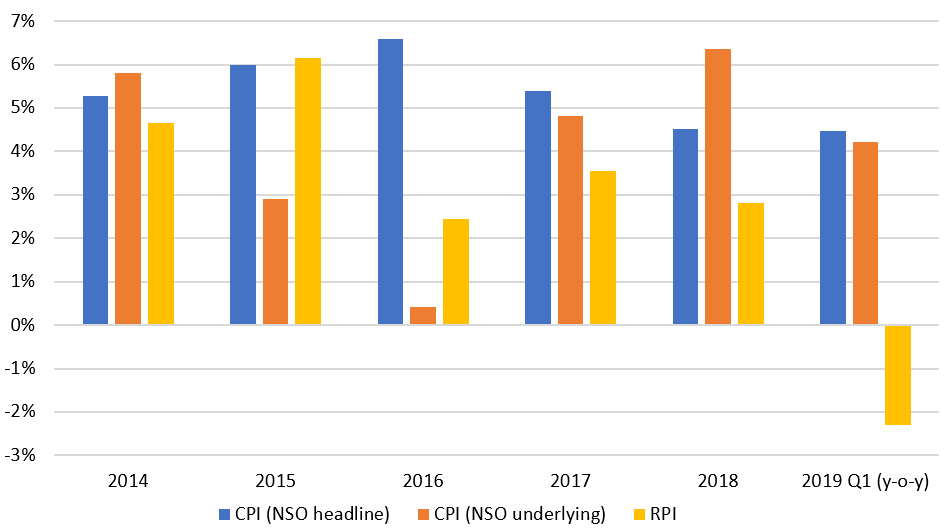 Recent changes to the Kina Facility Rate (KFR): are they working?

It has been three months since the Bank of Papua New Guinea (BPNG) adjusted the Kina Facility Rate (KFR) for the first time in more than six years. The KFR is intended to serve as the interest rate at which funds can be lent or borrowed overnight between banking institutions. In July, BPNG lowered the KFR by 25 basis points (bps) from 6.25% to 6%, and then in August cut the KFR again by 50 bps to 5.5%.

There are two main price indices used to measure inflation in PNG: the quarterly consumer price index (CPI), released by the National Statistical Office (NSO); and BPNG’s own monthly Retail Price Index (RPI). According to BPNG, the first KFR cut in July was motivated by the RPI in the first three months of 2019 indicating an average deflation of 2.3%. However, as shown in Figure 1, prices in the economy measured by CPI during this period registered 4.5% inflation, showing an entirely opposite price trend when compared to the RPI. 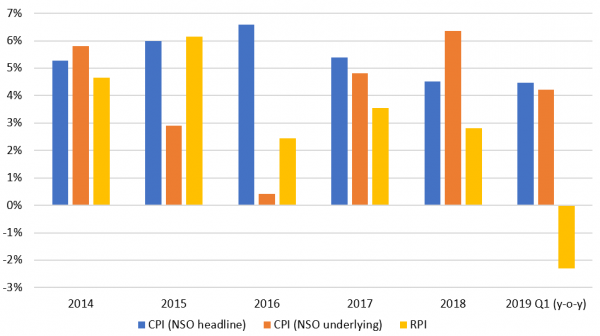 The official explanation provided by BPNG on the second rate cut in August was also puzzling. Governor Bakani’s press release in August stated, “In view of the on-going improvement in economic activity in the second quarter of 2019, with non-mineral private sector activities remaining robust and stability in other macroeconomic indicators, including inflation and exchange rate, [BPNG] decided to further ease its stance of monetary policy.” The statement goes against the standard practice of countercyclical monetary policy. If economic activity was robust, the central bank should have considered lifting not reducing the KFR (with the aim of making borrowing more costly and thus slowing down economic activity and pushing down prices).

But does any of this matter? Three months after the first easing, only one commercial bank in PNG, Bank of South Pacific (BSP), has revised its ‘indicator lending rate’ (ILR) downward while other banks have kept their respective ILR and deposit rates unchanged. Moreover, the BSP’s ILR was only revised downward by 10 bps, compared to the 75 basis point reduction in the KFR.

Why is KFR pass-through so limited? The simple fact is that due to excess liquidity, banks hardly need to access the overnight money market, rendering the KFR impotent as a policy lever. Figure 2 shows the increasingly abundant excess liquidity in the PNG banking system (that is, short-term assets that are in excess of the banks’ liquidity needs). 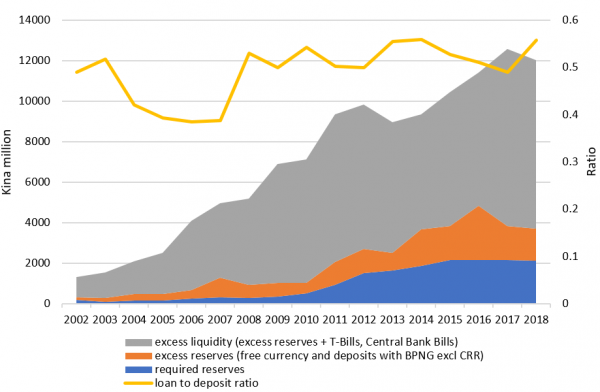 The question then becomes, why is there excess liquidity? Figure 2 also shows that on average, for every 1 kina received by commercial banks as a deposit from 2002 to 2019, only about 0.5 kina is loaned out to the market. The lack of lending in the economy is due to PNG’s structurally low lending environment, underpinned by a large unbanked population and less favourable business environment, although in recent years it has started to show some improvement. Furthermore, there is a massive spread between the very high rates at which funds are lent out by the banks, and the very low rates depositors receive on their accounts. Limited competition in the banking sector in PNG contributes to the persistently high interest spread (Figure 3). Competition in the banking industry has been further curtailed by the acquisition of ANZ Retail by Kina Bank in mid-2018, which has reduced the number of retail bankers to just three. The spread shown in Figure 3 (that is, the difference between the lending and deposit rate) is in fact one of the highest in the East Asia and Pacific region, which explains why PNG’s banks are the most profitable in the region. 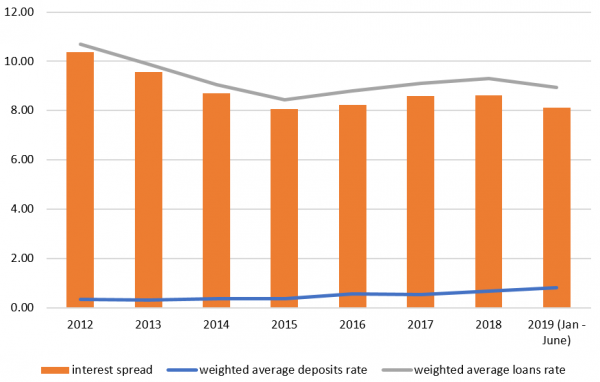 To get the KFR to work and, more importantly, to deliver economic growth, the government and central bank must reduce the interest rate spread and increase the demand for credit by creating a more favourable investment environment and allowing more competition to take place in the banking industry. Until then, any adjustments to the KFR, whatever the reasons, will achieve little.