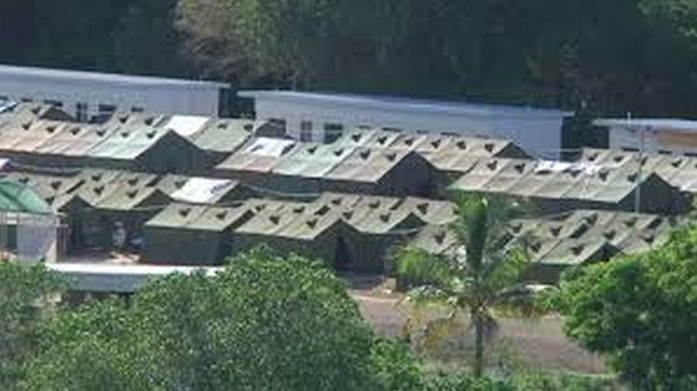 The violence in February this year at the Australian offshore asylum seeker detention centre on Manus Island resulted in the death of asylum seeker Reza Berati. In the absence of the results of formal inquiries into this incident, the investigative media reports provide compelling evidence that whatever happened that night involved a large number of men exhibiting behaviour resonant with a complex and toxic cocktail of anger, frustration, confusion, violence and chaos. Also reflected in this media narrative are the array of factions among these men and the apparent absence of any functioning order and law.

In fact there have been two ‘detention centre related’ deaths on Manus Island in the past year. In July 2013, 21 year old Raymond Sipaun, a Manus Island man died after being bashed by PNG’s police mobile squad, who were deployed there to provide extra security for the detention centre. His crime, causing disturbance in Lorengau town, is common for many young men in PNG and one that their families and loved ones are constantly managing, and living with the day-to-day consequences of. Five PNG men – members of the mobile squad sent to Manus Island for security – were charged with murder.

Ironically, it is with international attention on these cases that Australian leaders implicitly rest their case. For anyone risking arrival in Australia by boat, PNG men are a dangerous lot. Unfortunately, the Australian policy, the Manus centre and these events also exacerbate widely accepted and recognised problems of gender-based violence in PNG.

What are the implications of this policy for those who have to live daily with violence in Manus Island? For too many people in PNG, especially women and children, the management of violence in homes and communities is as mundane as a daily chore. Mitigating the risk of a violent act occurring, seeking health treatment as a result of violence, seeking shelter to ride the tidal wave of a violent episode, nursing a broken arm, hiding a bruised eye or pretending that all is ‘normal’ are daily concerns undertaken in the midst of breakfast, livelihood strategizing, marketing, loving, caring, lunch, customary feasts, gardening, attending church, weaving, fishing and even love making. For community leaders, mediating conflict resolution to prevent an instance of violence escalating into anything more is an ongoing affair.

The extent of violence has led to international outcry and in a jointly prepared PNG Country Gender Assessment conducted in 2012 by the World Bank, The Asian Development Bank, the Australian Government, the United Nations and the Government of PNG it noted that Family and Sexual Violence (FSV):

FSV is widespread and pervasive, and has a devastating impact on the lives of individuals, families and communities. The high prevalence of such violence in PNG is a cross cutting issue, with very serious implications for public health and social policy, economic development, and justice and law enforcement.

To see how the Manus Island detention centre might have a direct impact on levels of violence in PNG and on gender-based violence, it’s useful to look at the United Nations study “Why Do Some Men Use Violence Against Women and How Can We Prevent It?”  This report, which includes PNG, noted that the complex factors shaping male violence:

… reflect influential narratives of masculinity that justify and celebrate domination, aggression, strength and a capacity for violence as well as men’s heterosexual performance and men’s control over women. These findings reflect social patterns of gender inequality and patriarchy that promote male dominance and power over women.

While violence against women cuts across all socio-economic groups and sites, the study suggests that the use of violence may increase among men who have less power compared to other men or who experience social stresses such as those caused by substance abuse or by poverty. Still, while social exclusion or inequalities may be a trigger of violent behaviour, this violence is not perpetrated indiscriminately. Rather, it is used against those over whom the perpetrator perceives he has power and in a context where that kind of violence is normalized because of cultural acceptance and impunity. It may be that such violence against women is used as a way to reassert some level of power and control where, in other domains of their life, men feel relatively powerless.

In the space of two years, the male population at the location of the detention centre has greatly increased, as has the intensification of the complex web of political dynamics that entangles state sovereignty and a regionalist agenda with the joint demonising and dehumanising of male asylum seekers on the one hand and the local men on Manus Island, who are presented as a counter demon to be reckoned with, on the other. By the end of 2013, the centre had over 1,100 male asylum seekers, and around 220 (nearly all male) Manusians were employed to work at the centre. Add to this the staff of the various state and contracted agencies and migrants seeking the economic opportunities presented by the centre and the number is significantly higher.

These men come from diverse backgrounds but many of them will have been directly involved in or impacted by events that are riddled by male-dominated conflict – think of the asylum seekers themselves, or military, private security and police personnel. They hold different levels of authority, such as being officials of state – Australian or PNG – managers of contracted security firms, or as leaders within their ‘faction’ – be it a group of asylum seekers, local security guards or local groups. The Manus complex is without doubt a dynamic of power and hierarchy that depends on masculine domination, aggression, intimidation and inequality. These dynamics are reaffirmed at the national and bilateral political levels in the language used by political leaders in Australia and PNG.

So while the attention of the international community might be on the welfare and security of asylum seekers, another important question to consider is the impact of the centre on Manus Island itself and, in particular, the lives of the local men who are attracted by the economic opportunity and status of being involved in an internationally-driven intervention. Many of these men will find themselves in situations where they have less power and income than others. What is the direct or indirect impact of all this on women and other vulnerable groups in Manus?

During my PhD fieldwork in a Port Moresby settlement in 2013, I asked people what issues most affected or threatened their livelihoods and well-being. One of the most common responses was violence. People talked about the many forms of violence in families and the broader community. These included ethnic violence, criminal activity, petty crimes, rape, domestic violence and state violence. Some forms of violence are easier to talk about, such as state violence in the form of settlement eviction, while others, such as domestic violence and rape, were not so easily spoken of. An important thread in the responses by mothers, fathers, siblings and leaders was how they manage the men and ‘boys’, or younger men, in the absence of employment or other forms of social support. This is important for the well-being of everyone, especially when acts of violence committed by men (whether they are domestic and directly impact the family or committed externally, such as armed hold up), have a direct impact on the welfare of his family and community.

Although Manus Island is not a Port Moresby settlement, based on my own experiences with violence on Manus Island and long-term, ongoing connection with Manus, I have no doubt that the same issues facing families in Port Moresby are being dealt with by families on Manus.

While some people may argue that the problems of violence on Manus predate the detention centre and are not therefore a problem for policy makers, I would argue that Manus, like the rest of PNG, faces immense challenges in dealing with violence. The locals of Manus, the younger men of Manus in particular, are a vulnerable population easily prone to influence and manipulation, just like young men all over the world. The detention centre has a direct bearing on their behaviour by promoting a culture of violence.

While Peter O’Neill may be keen to help Australia find a lasting solution for the asylum seeker problem, he must bear in mind that the economic benefits of Manus Island do not outweigh or justify violence in any form, be it towards an asylum seeker, a rogue local youth, or a woman facing an adrenalin intoxicated husband, brother or son. Sending in a mobile squad of policemen is not enough to provide security for the Manus population, and in fact it is already proving to be yet another contributor to violence.

There are also questions for Australia and its support of activities to reduce gender-based violence and promote gender equality in PNG. What is one to make of a government that opposes such violence on the one hand, and takes action that increases it on the other? Whatever the benefits of the Manus detention centre are, its contribution to a culture of violence in PNG and violence against women in particular makes it unacceptable. A re-think is long overdue.