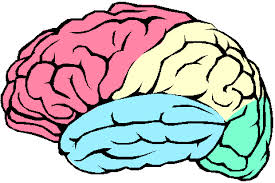 Reflections on the new aid paradigm, part 3: research for development

If one defining feature of the Coalition government’s overseas aid policy is its determination to achieve more in economic and private sector development, another is its emphasis on the importance of research, innovation and risk.

Here the difference between the present and former government’s approach is less about dollars and more about emphasis, presentation and, not unimportantly, attitude. While the former government can certainly not be accused of entirely under-valuing research and innovation, they can be found, beyond reasonable doubt, to have approached these things in a hesitant, unsystematic way.

The present government sounds notably more interested in the potential gains for international development from investment in research and innovation, and more decisive about supporting such investments, through both Australian initiatives and multilateral or plurilateral ones. Research and innovation were prominent in the Press Club speech with which foreign minister Julie Bishop launched the government’s aid policy. The government also announced, as part of the 2014-15 budget, the establishment of a Medical Research Future Fund, which will grow to $20 billion and eventually, by 2023, double the amount of funding available for medical research in Australia. The latter is a domestic measure, but with the potential to deliver some global benefits. (It should be noted that other, substantial cuts to science funding tended to dampen enthusiasm for this measure.)

In what follows, I discuss the government’s policy on development-related research. In a further post I will discuss what the government has said about innovation for development and, related to that, its appetite for risk.

Australia had already been quite an improver in funding for development-related research prior to the election of the Coalition government in 2013, and in mid-2012 the Australian Agency for International Development (AusAID) had released a development research strategy [pdf] in which it said that the share of research funding in what was then a growing aid program would be maintained at a relatively high 2.4 per cent.

The chart below shows, for the two calendar years 2008 and 2012, the proportion of sector-allocable Official Development Assistance (ODA) that was directed to research of various kinds by the 21 OECD Development Assistance Committee donors whose statistics for both years were in reasonably good order. (The US has been included owing to its importance as a donor, but it seems clear that they under-reported.) 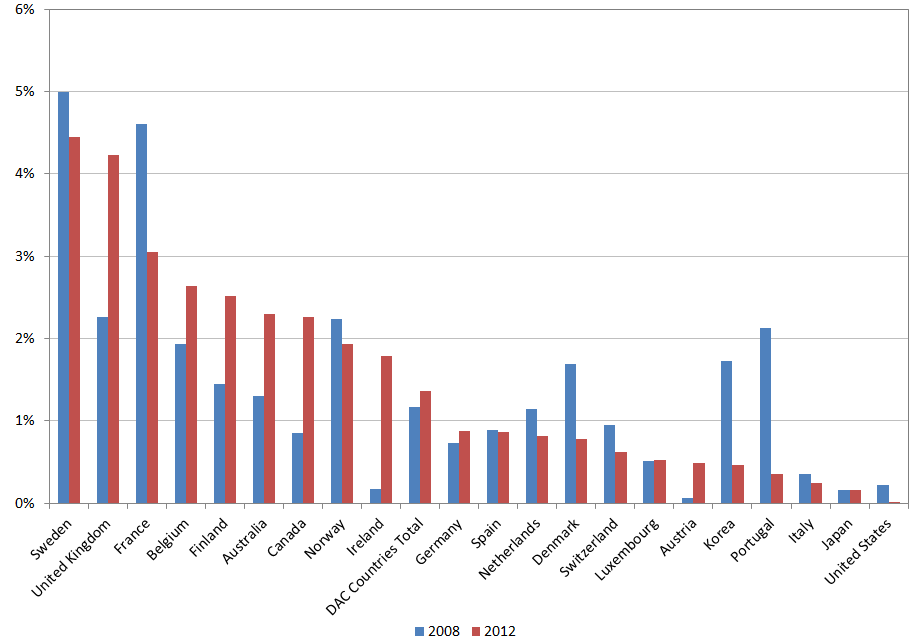 In 2008, OECD donors reported spending 1.2 per cent of their collective sector-allocable aid on medical, educational, environmental, technological and energy research, together with research relating to agriculture, fisheries and forestry, and support for research and scientific institutions. That’s $US1.21 billion, in 2012 prices. By 2012, the proportion had risen slightly to 1.4 per cent ($1.38 billion). Sweden was at the head of the pack in both years, and the two biggest donors, Japan and the US, were at the tail.

Australia was just above average in 2008, spending 1.3 per cent of its sector-allocable aid ($US47 million, in 2012 prices) on the above purposes. By 2012, it was well above average at 2.3 per cent ($US107 million), and had moved from tenth to sixth place. Other big improvers, in terms of the percentage change in dollars spent and in order of decreasing effort, were Ireland, Austria, Canada, the United Kingdom and Finland.

With a flat-line aid budget of around $A5 billion, Australia’s absolute level of support for development-related research, and the global, regional and national institutions that undertake it, will obviously grow much less than might have been expected a year ago. However, given the prominence accorded to research in the government’s aid policy, funding might be expected to continue to grow in absolute terms, and even more as a proportion of Australian aid. Whether it actually will is, as the discussion below shows, not certain.

The single largest component of Australia’s funding in this area goes to the Australian Centre for International Agricultural Research (ACIAR), which has been relatively protected from the force of aid budget cuts imposed by the previous and present governments in 2012 and 2013. ACIAR received $A96.1 million in the 2014-15 budget (around one-quarter of which will be passed through to the global Consultative Group on International Agricultural Research). The chart below shows the trajectory of annual funding outcomes for the Australian aid program as a whole, and for ACIAR within that overall envelope, since the 2008-09 financial year, with total ODA figures uniformly divided by 50 to aid comparison. 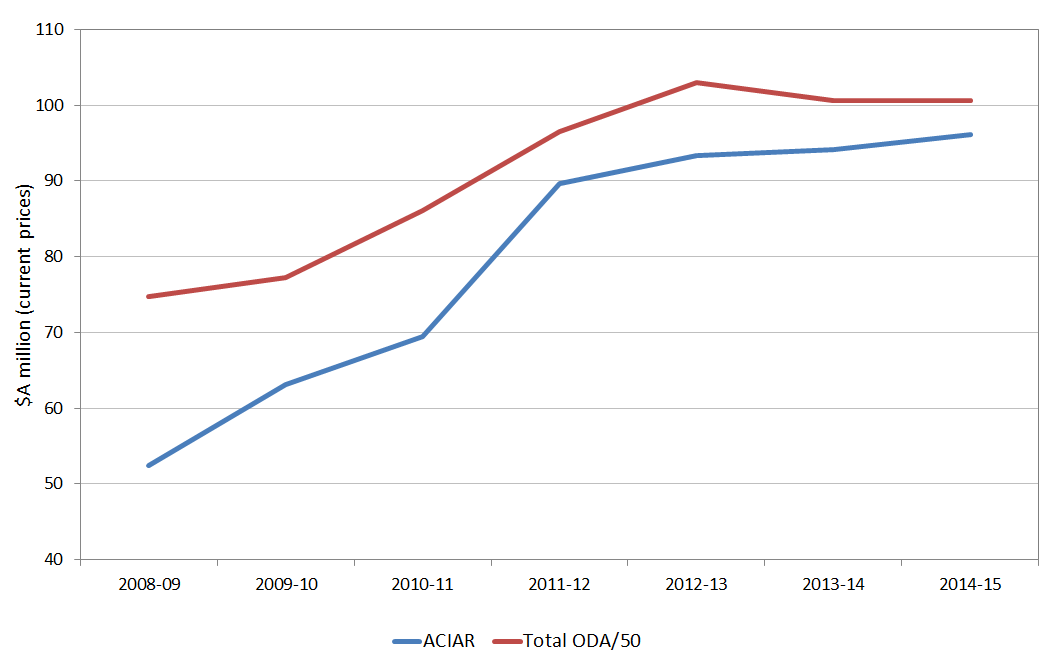 In the case of Australian aid funding for health and medical research, it is harder to establish a baseline. Under the previous government’s medical research strategy for the aid program, released in October 2012, Australia was to ‘invest in the development of medicines, vaccines and diagnostic tests that can be used to improve the health of the world’s poor’. According to AusAID’s 2012-13 Annual Report, funding was to be ‘around $40 million over five years from 2012–13 to 2016–17’ (p. 181). An initial investment of $10 million in 2012-13 was to be used for ‘tools and technologies to treat, diagnose and prevent malaria and tuberculosis’—in other words, to support Product Development Partnerships (PDPs).

The above strategy put prior spending on health research (mostly about ‘health policy and systems’) at $20 million in 2011-12 and said medical research would, from that point forward, represent around 30 per cent of the health research budget. Thus the expectation was that health and medical research might grow to around $30 million a year, with around $10 million of that devoted to medical research and divided between PDPs and a grant-making partnership with the National Health and Medical Research Council (NHMRC). The initial $10 million was, as noted above, allocated entirely to PDPs. The Australian government did not announce its PDP funding decisions with much fanfare or explain the basis on which choices were made, but we know from the recipients themselves that the $10 million allocation was divided equally between the Medicines for Malaria Venture, the TB Alliance, Aeras and the Foundation for Innovative New Diagnostics.

The present government has now given a firm commitment to spend $30 million each year from 2014-15 on health and medical research. This was implied to be a substantial increase on the annual level of spending under the previous government (Julie Bishop: ‘This is the most we have ever invested in this area in a single year’). However, on the figuring above, it more likely continues a commitment of the previous government. It might be, as Greg Sheridan of The Australian simply assumed in this piece, that the balance will shift in favour of funding for medical research, with less funding allocated to work on ‘health policy and systems’. Certainly Julie Bishop highlighted the TB Alliance (that is, the Global Alliance for TB Drug Development), and therefore PDPs, in connection with the health and medical research funding announcement. However, there is nothing in the government’s aid policy document to indicate that the balance between policy-based and medical research might shift, and indeed very little information at all on how the announced funding might be used.

It seems most likely that, as was planned under Labor, medical research funding will be relatively small and divided between global partnerships and the NHMRC, with funding for the former continuing to be rather derisory. It should, by the way, be noted with relief that Julie Bishop has made no mention of the idea of creating aid-funded, northern-Australia-based medical research and training hubs, which figured in Coalition policy during the 2013 election campaign and were at one point slated to consume some $800 million of aid funds.

The level of funding which is likely to be available in future for other types of research is extremely hard to discern. The fate of the former government’s Australian Development Research Awards scheme, most recently funded at around $11 million per year, is unclear. The last funding round for the scheme was in 2012. Of the 50 grants made at that time, 23 terminate this year and a further 24 next year. All active grants relating to research on disability, education, gender, mining for development, the impact of scholarships, water, sanitation and hygiene, and Africa will terminate by next year, with only a few health-related research projects continuing until 2016. The four ‘knowledge hubs’ for health, funded at a bit over $7 million per year from 2008 to 2013, fizzled out in 2013 under the previous government, without explanation. There has been no indication that they, or anything similar, will be revived under the present government. The future of the DFAT-CSIRO research alliance, established in 2007 and subsumed under a strategic partnership agreement [pdf] in mid-2010, is also unknown, but unlikely to be very bright given that the activities funded under it were largely in the areas of environmental management and climate change adaptation.

Overall, it does not seem that the amount of funding allocated to development research will immediately be higher under the Coalition than it was under Labor. Given that in 2014-15 ACIAR’s funding showed only a modest increase of $2 million, that funding for health and medical research is essentially flat at $30 million, and that the other schemes mentioned in the paragraph immediately above are dormant or deceased, funding might even have fallen by some $7-10 million. However, if the Coalition keeps faith with the signals it has sent, and if the results of early investments are sufficiently compelling, funding should pick up from 2015-16, or perhaps even sooner given that there is still a tidy pile of money in the aid program’s cross-regional budget, not all of which could be earmarked for purposes related to refugee resettlement.

Robin Davies is the Associate Director of the Development Policy Centre. This is part of a series of blogs examining the new aid policy, collected here.