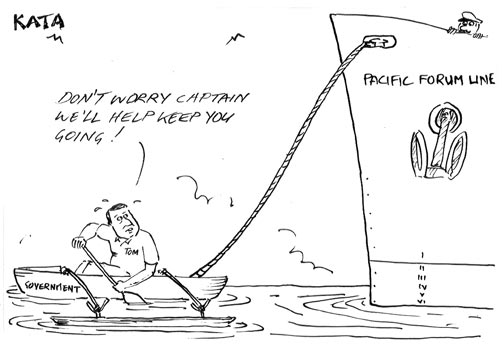 Regional service delivery in the Pacific – have expectations been met?

This post summarises a recent working paper prepared by Matthew Dornan and Tess Newton Cain for Asia and the Pacific Policy Studies.

The concept of regional service delivery, or ‘pooling’, has been promoted among Pacific island countries for decades as a means of addressing capacity constraints associated with small size and remoteness.

The path almost any regional initiative takes usually begins with regional cooperation. Whether the best approach may then be a move towards regional integration, or regional provision of services, or both – depends on an assessment of obstacles to development and consideration of benefits and costs.

There has been no comprehensive published assessment as to how pooling of service delivery in the region has fared across sectors since the establishment of the Pacific Plan. We sought to address this gap by researching the effectiveness of the 20 pooling initiatives identified by our study. Our final conclusions are available in a working paper. Preliminary results have previously been presented in a submission [pdf] to the review of the Pacific Plan, at the Pacific Update [pdf] and on this blog.

What did we find out?

The Pacific experience with pooling of services has been one of mixed fortunes. Of the 20 initiatives where pooling of services was a primary objective, 11 could be considered to have achieved some success. Eight initiatives were found primarily to be failures, and one could not be evaluated due to its recent establishment. Initiatives were assessed on the basis of whether pooling was effective; some initiatives that were failures in this respect were nevertheless successful examples of cooperation between states. It was clear that initiatives whose areas of focus are non-commercial have fared better than those that have ventured into commercial areas such as transportation services (e.g. Air Pacific and the Pacific Forum Line).

The landscape of pooling initiatives is one best described as ‘patchwork’. No two initiatives have the same membership base. So, the University of the South Pacific (USP) is owned by 12 of the PICs and the Parties to the Nauru Agreement (PNA) has a membership of eight.

This patchwork approach has strengths and weaknesses. On the one hand, it has been criticised for creating duplication among different organisations (concerns that have led to review of the regional institutional framework, but only limited change). We agree that it would probably be more efficient to coordinate pooling under a single supra-national organisation, as is the case in the Caribbean and the European Union. A centralised arrangement would give greater clarity of political purpose and help to streamline reporting and governance.

However, at the same time, the patchwork also has benefits. To begin with, it is highly pragmatic. Rather than following any detailed design requiring a grand bargain among Pacific island countries and with development partners, pooling progresses where demand is greatest and resistance is least. This gradualist approach helps to ensure that pooled service provision proceeds where the benefits outweigh the costs for all participating countries.

The key strength of this approach is its flexibility. If a particular initiative is not working, that service can be restructured or even discontinued without calling into question other regional initiatives. Donor assistance can of course prevent this from happening – and this can indeed be a problem. Nonetheless, providing Pacific island governments with a ‘choice’ of regional service providers introduces an element of competition, and prevents Easterly’s famous ‘cartel of good intentions’.

Why is pooling so challenging in the Pacific island region?

Despite our support, on balance, for the patchwork of service provision that has developed in the Pacific, it is clear that pooling has not met the optimistic expectations articulated in the Pacific Plan. Why is this so? Pooling of service delivery is inherently challenging where participation is voluntary, as in the Pacific island region. There is no political federation or constitution obliging countries to cooperate, as exists for state governments in Australia. This means that pooling initiatives must be negotiated every step of the way among the members of the ‘club’ and, at any time, one or more members of the may choose to leave [pdf – ADB/CommSec Study Toward a new Pacific Regionalism].

Political economy factors also work against regional service delivery. Civil servants with a vested interest in national service provision are in a strong political position. Political leaders are less likely to support pooling initiatives given that their benefits are highly uncertain (due to principal-agent problems), take time to materialise and are generally attributed to regional agencies rather than national governments. A broader issue is that of sovereignty. Whilst it has been argued that ‘shared sovereignty’ is the most beneficial road forward, the (not surprising) realities of post-colonial politics are such that this is a difficult trajectory to navigate

What makes the Pacific experience of pooling special?

Two other factors make the Pacific experience with pooling unique to that of other regions, and in our view have undermined its effectiveness. The first is reliance on donor funding. On average, the initiatives we examined received over 80% of their funding from development partners. This is higher than in other regions like the Caribbean.

Reliance on donor funding has positive and negative impacts. It is evident in some cases (e.g. the Pacific Forum Line) that the injection of donor funding has avoided a situation in which a pooled service ended because of under-capitalisation. However, the prevalence of development assistance inevitably affects the incentives of regional organisations, reducing their accountability to Pacific island states (as discussed by Satish Chand here [pdf]). It means that development assistance can act as a price distortion, funding regional schemes that are not valued by Pacific island countries. This inhibited engagement by Pacific island states in several initiatives we studied.

A second distinctive feature of Pacific pooling is the strong focus on capacity building at the national level. Almost 60% of the initiatives we examined involved this element, with capacity building of national governments being a primary component in 20% of cases. Whilst such initiatives may be warranted, they also contradict the central purpose of pooling, which is to deliver services regionally in order to overcome national capacity constraints.

These contradictions are rarely acknowledged. The focus on national capacity building partly reflects the priorities of development partners, which see aid as a temporary measure, and are consequently reticent to use the term ‘capacity supplementation’ to describe their projects (see this World Bank discussion [pdf] and this paper by Herr and Bergin). However, our research indicates that this focus also reflects the demands of Pacific island governments. It is common for them to insist on using the term ‘capacity building’ when describing aid projects that actually involve capacity supplementation – perhaps suggesting a reluctance to cede government control (sovereignty) over service provision.

So, what for the future?

We expect future expansion of regional service provision in the Pacific to be slow. The challenges to pooling identified in our research suggest that the ambitious agenda for regionalism articulated in the Pacific Plan is unlikely to materialise in the near or medium term. Cooperation will instead continue to dominate regionalism in the Pacific.

Immediate prospects for pooling are more positive at the sub-regional level, although here too there are challenges. The last decade has seen strong political support for sub-regionalism among Pacific island governments, especially in Melanesia. The financial commitments made by the member governments of the Melanesian Spearhead Group (coupled with apparently active engagement by the political leadership) toward pooling initiatives at this sub-regional level are particularly promising.

However, sub-regional pooling initiatives also face many of the challenges inherent in regional pooling, such as smallness and remoteness, which increase costs. Sub-regional initiatives that do proceed will expand the patchwork of pooled service delivery, bringing with them both costs, in terms of duplication, and benefits, in the form of services that meet the demands of Pacific island states. The immense diversity in the region, in terms of size, levels of development, cultural background and constitutional frameworks, suggest that this incremental patchwork approach to regional service delivery is appropriate at the present time.