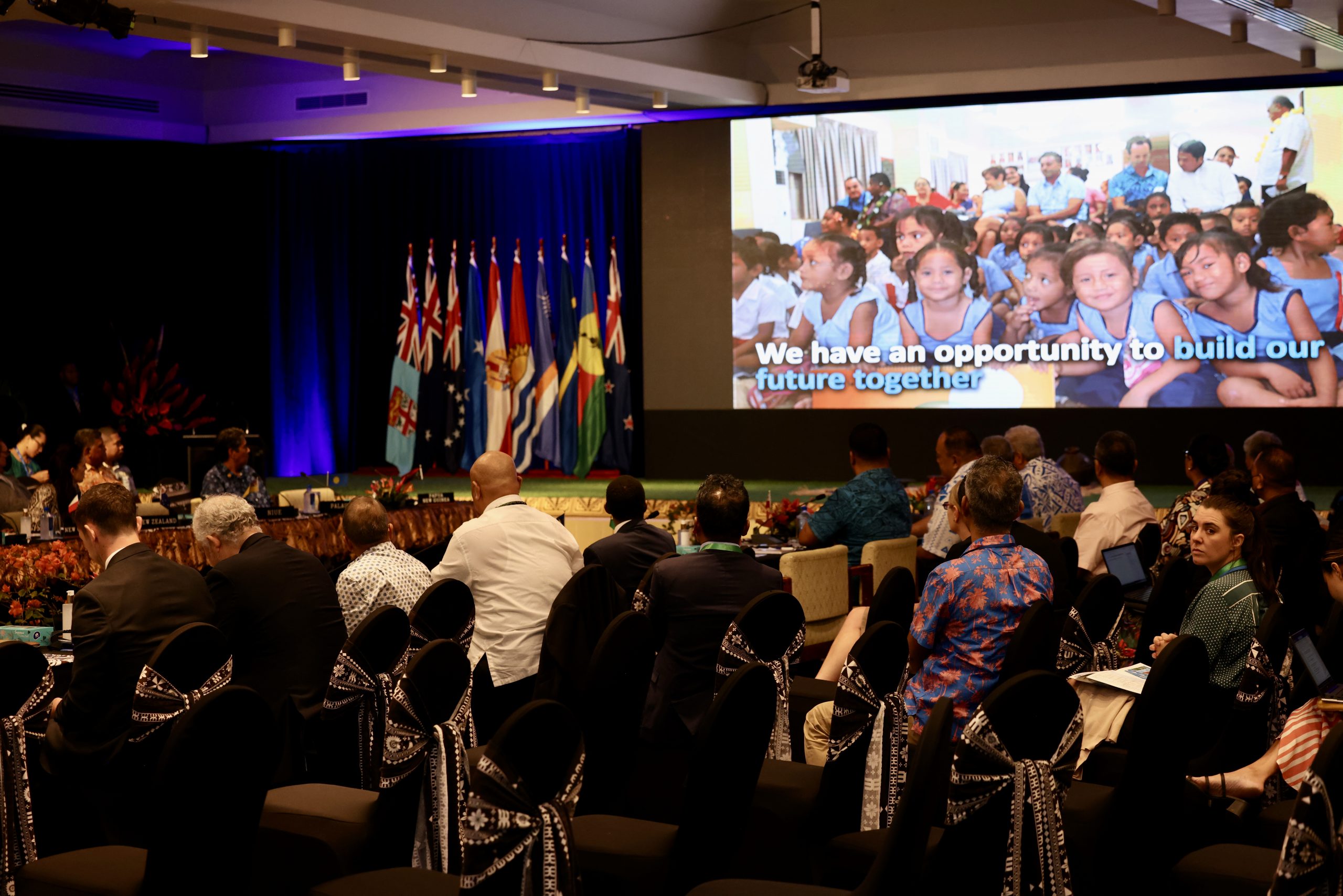 At the Pacific Islands Forum leaders’ meeting earlier this month

The signing of a treaty between China and Solomon Islands has instigated a frenzy of development spending in the Pacific by Australia, New Zealand and even the US. This has been readily labelled by cynics as a geostrategic political response to China’s increasing influence.

Surprisingly, there is little discussion of a treaty that Australia and New Zealand themselves spent more than two decades negotiating with all the Pacific Islands Forum (PIF) member countries – the Pacific Agreement on Closer Economic Relations, or PACER Plus. This agreement could have achieved far more than the current flood of development aid, had Australia listened to Pacific voices, as they say they wish to do now.

The PACER Plus negotiations led to an unsatisfactory conclusion because only the smaller Pacific countries (including Solomon Islands) signed, but not Papua New Guinea and Fiji, without whom the regional legitimacy was considerably reduced.

PACER Plus, which came into force in 2020, was signed by Cook Islands, Kiribati, Niue, Samoa, Solomon Islands, Tonga and Tuvalu, in addition to Australia and New Zealand.

But the formal agreement itself was unfortunately channelled by Australian and New Zealand advisers into being a mere regional trade agreement designed “to support Pacific Island countries to become more active partners in, and benefit from, regional and global trade”.

The Australian Foreign Minister Penny Wong has correctly admitted that Australia cannot compete with China in doling out aid funds. Rather, she sees the need for Australia to strengthen its relationships.

The promises made by the new Labor government will deliver real benefits for the PIF member countries. They include strengthening Pacific maritime security to help countries tackle illegal fishing in the region; boosting development assistance; a Pacific climate infrastructure financing partnership; an Indo-Pacific broadcasting strategy, to boost Australian content and to project Australian identity, values and interests to the Indo-Pacific region; and bipartisan parliamentary visits.

All these have great promise for the future, but probably the two most promising initiatives are reforming and expanding the Pacific Australia Labour Mobility seasonal worker scheme (including 4-year visas which allow the workers to bring their partners and children), and boosting Pacific permanent migration to Australia.

While these initiatives will certainly enhance Australia’s standing in the Pacific, they are still seen as driven by Australia’s current geostrategic fears of being outflanked by China, and these forces could change over time. More importantly, these initiatives are not part of any formal agreement between Australia and all the PIF member countries.

Is it now an opportune time to revise the formal PACER Plus agreement, to not just draw in PNG and Fiji, but also deliver more of the benefits that Pacific island economists have been calling for for over a decade, and forestall the prospect of geopolitical competition?

Between 2006 and 2014, I wrote many articles pleading with Australia to not exclude Pacific workers from Australian labour markets or even from Super Rugby. I pleaded for Pacific voices to be heard to address the emerging chasms in Pacific integration. Ten years ago, I suggested that China, given its massive rise as a global economic powerhouse rivalling the US, should be included in a regional donor dialogue driven by the US and Australia.

As long ago as 2009 I argued in the New Zealand journal Pacific Connections (in an article entitled ‘Alternatives to legalistic masochism’) for a South Pacific community led by Australia and New Zealand:

I believe that it is possible for Australia and New Zealand to foster progress on a number of key economic and social fronts, with the jigsaw pieces falling gradually into place, over time, delivering concrete development benefits to the FICs [Forum island countries] at every stage, and making legal agreements like PACER an inevitability. But that would require Australia and New Zealand to take responsibility for addressing some of the fundamental causes of underdevelopment and lack of economic growth in the FICs.

As I have argued over the years, such a deal should include:

It is heartening that many of these initiatives are now being taken up. Australia and New Zealand, together with the PIF Secretariat, should grasp the opportunity to embed these initiatives and take them further through a revised and strengthened PACER Plus agreement, which would be so valuable to all PIF member countries (including PNG and Fiji) that none would consider any destabilising treaty with any superpower external to the Pacific.

Wadan Narsey
Wadan Narsey is an adjunct professor at the Cairns Institute (James Cook University). He worked at the University of the South Pacific for 40 years, during which time he did many consultancies for the World Bank, AusAID, NZAid, the Pacific Islands Forum Secretariat, and the Fiji Bureau of Statistics.