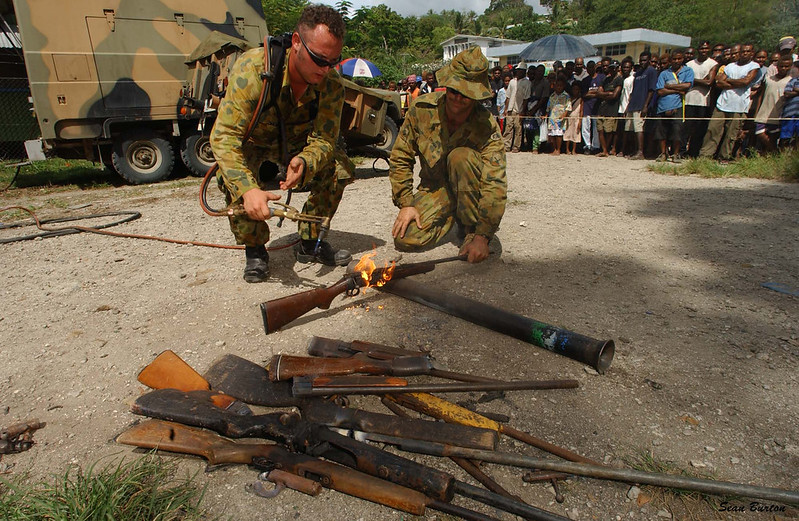 It has been an interesting couple of weeks for Solomon Islands, with stories of policing, weapons, replica weapons and a security agreement with China dominating the local and regional media.

Let’s start with the issue of arming the police. After the tensions, for a long time Solomon police did not carry arms but this is an exception in our history. Indeed, the precursor of the Royal Solomon Islands Police Force (RSIPF) created during the early colonial era was known as the ‘BSIP Armed Constabulary’. For as long as I can remember, our police have had access to some form of arms stored in the armoury. Their use traditionally was ceremonial, mostly during parades. In fact, many of us who used to watch their parades loved to hear the sound made when the police and marine units lifted the guns as they responded to the orders of the parade commander.

The only time the weapons were used in my lifetime was during the Bougainville crisis and during the ethnic tensions.

The Bougainville crisis necessitated the importation by the Solomon Islands Government of high-powered guns because of incursions by armed Papua New Guinean soldiers across the border and their use against Solomon Islands citizens at the PNG-Solomon Islands border. I recall that importation as at that time I was a legal adviser in the Ministry of Foreign Affairs. The weapons were purchased from the US via a broker in Singapore. Some questions were asked but, given the circumstances, their importation was justifiable. A diplomatic request was made for their temporary storage in Australia before they were shipped to Honiara. These were government-procured arms and the procurement procedures for their acquisition duly complied with government procurement processes.

I have been advocating for some time the rearmament of the RSIPF and I am also supportive of the RSIPF to be trained by whoever can provide it. Many police officers have been trained in the US, Taiwan, Australia, UK, Singapore, New Zealand and Fiji. Thus, I have no particular issues with them being trained by Chinese advisers as was the case recently.

However, I do have issues if the RSIPF is going to equip itself with high-powered guns, whether real ones (as supplied by Australia) or fake ones (as supplied by China). These concerns are exacerbated by the current level of secrecy and confusion around the security arrangements. Firstly, it is questionable whether it is necessary for the RSIPF to be armed with high-powered weapons. Perhaps there are still a number of guns that were taken from the armoury that are still in the hands of former MEF (Malaitan Eagle Force) militants. Moreover, this information might be known by a key member of the current political coalition who is a former MEF Commander. Perhaps the police just want to be prepared. However, we also should not forget what happened 22 years ago during the ethnic tensions, when the armoury was compromised by police giving weapons to militants and militants raiding the armoury for weapons – weapons which were then used by Solomon Islanders to intimidate and kill their fellow citizens.

Members of the public are also genuinely concerned about the manner in which the Chinese fake guns were imported into the country – via a logging vessel which is, to say the least, an unusual means of transporting official government goods. The shifting narratives from the Police Commissioner about this incident have raised more questions than they have answered.

There are also broader questions. Is security created through arming the police? Or should we instead focus on an approach to security whereby the community is recognised as a partner in building and maintaining peace, and build on the long history Solomon Islanders have of brokering conflict amongst themselves? While, as I said, there is nothing intrinsically wrong with arming the police, the focus needs to be on using community policing, chiefs, and youth leaders to broker conflicts. It is unfortunate when the ordinary citizens of the country are viewed not as partners in development, but as threat to the hegemony and hold on power by some people. Last year’s riots and COVID-19 have revealed many underlying governance weaknesses. As I have argued earlier, they are symptomatic of a society that has become increasingly less pluralistic, and of political and economic institutions that have become less inclusive.

Then there is the leaked the security agreement with China, which has exacerbated existing unease among the public about China. The increasing engagement with China is explained by the Prime Minister as an attempt by the government to diversify its engagement on security. It is unlikely that China will build a naval base in Solomon Islands. The agreement does not specify that it will and, although it could be construed that way, the reality is that it is not going to happen. Australia is already building a patrol base in Lofung, in the Shortland Islands which borders Papua New Guinea, and has announced that they will build another one in the eastern Solomon Islands. I would venture to suggest that the capacity of these investments should cater for a naval base if the need ever arises in the future.

What is unprecedented about this security arrangement is that it allows China, with the consent of the Solomon Islands Government, to send armed personnel to protect its citizens and assets. It also prohibits any publicity around these arrangements. It is ironic that a prime minister who invariably extols the virtues of national sovereignty should agree to cede a fundamental sovereign function – the protection of lives and property – to a foreign force. It is not clear if this is inadvertent, but it would seem that its ramifications have not been thought through.

The security arrangement has also raised concerns in the region. The President of the Federated States of Micronesia has written to Prime Minister Sogavare requesting that he reconsider it. There is perhaps nothing intrinsically wrong with Solomon Islands signing a security agreement with China. There should, however, be coherence with similar arrangements with other countries, which focus on the capacity of the Solomon Islands Police Force to deal with internal security uprisings, and preferably all assistance should be within a regional framework supported by the Pacific Islands Forum. While a country may choose its friends, it cannot choose its neighbours.

In Solomon Islands today, there is no opportunity for policy debate by the public except on Facebook. The public and constituents do not have the same ease of access to our ministers and prime minister as embassy officials, and mining and logging CEOs. Such is the current degree of polarisation that any criticism or comment is viewed by the current political coalition as ‘anti-government’. There does not seem to be any scope for dissenting views, or even constructive ideas from outside the inner circle, to be accommodated.

Unless a more pluralistic society is promoted where people’s views are welcomed, and there are more inclusive political and economic institutions, the government will be forced to depend on regional troops to support it. At some stage, regional partners must hold Solomon Islands politicians to account for the economic and political situation they have created and the resulting violence such as the rioting last year. The current focus on arms, without attention to rights and responsibilities, cannot and should not be sustained.