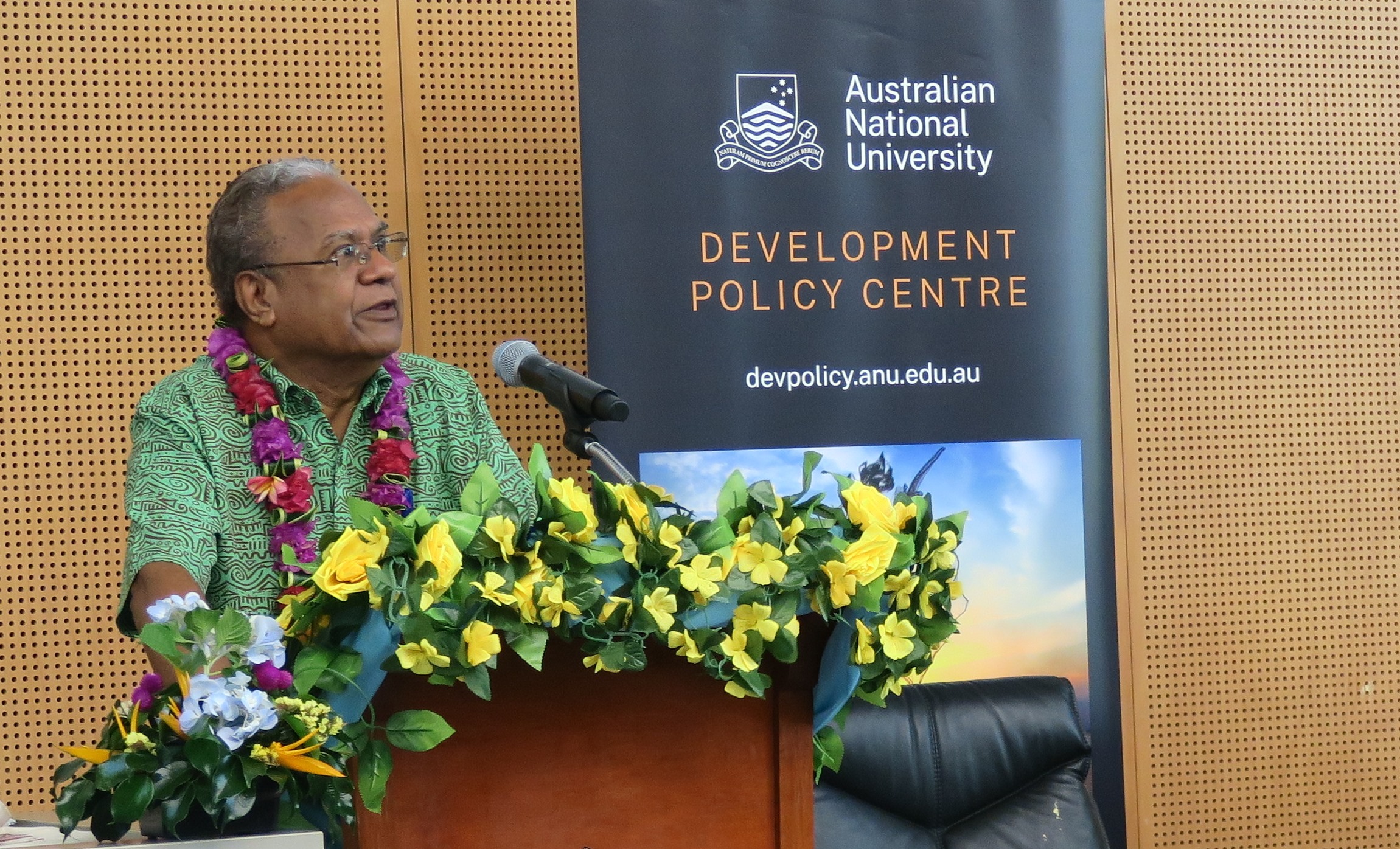 When our former Prime Minister Sir Mekere Morauta passed away at the end of 2020, there was an outpouring of national grief and a widespread recognition that his government had achieved more than any other through his program of reform to put the country on the path to prosperity. Among others, the late Koiari Tarata, then Secretary for Treasury, Sir Wilson Kamit, then Governor of the Bank of PNG, and I, as the Chief Secretary to Government and then, with the ill-health of Mr Tarata, as Acting Secretary for Treasury, were part of those reforms from the end of the 1990s to 2002. It was indeed a heady and purposive period, when we worked long hours and with great intensity to push through the ambitious reform program our Prime Minister spearheaded.

We also received much support and worked closely with the business and financial sector community within PNG, and we also benefitted from the support of our international partners – the ‘Friends of PNG’ Australia, New Zealand, Japan, and the US; and a group of eminent persons – Prof. Ross Garnaut, Prof. Dwight Perkins of Harvard, and Mr Sakakibara (‘Mr Yen’) of Japan. I also want to note the critical commitment and support in the implementation of the reforms from the PNG business and financial sector leadership.

Of the Morauta reforms, one of the most important was the enactment of the Central Banking Act of 2000, which established the independence of the Bank of Papua New Guinea. Last year, when the Treasurer, The Hon. Ian Ling-Stuckey, invited us to undertake a review of that Act, we readily agreed. While we recognise the significance of the Central Banking Act and the other reform achievements of the Morauta government, we do also recognise that no reform is perfect. The world is changing, and we should always be learning from our experience. Twenty years on, it seemed most appropriate that the Act be reviewed.

The size of the PNG financial system is over K40 billion, over 42% of PNG’s GDP. It is a very significant contributor to the nation’s economy, and, let me add, critical to the stability, employment, and income of all sectors, and growth of the economy.

The review is being undertaken by what we call the Independent Advisory Group, which consists of myself, the former and much respected Governor of the Bank of PNG, Sir Wilson Kamit, and ANU Professor of Economics and PNG expert, Stephen Howes. We are also supported by a secretariat with staff from Treasury and BPNG. We have also been well served by the ANU-UPNG partnership and the background work undertaken by academics from the two institutions.

Our work is being undertaken in two phases. We have completed the first phase, and produced our first-phase report. And we are now working on the second phase. The first phase dealt primarily with the governance of the central bank and with monetary policy. The second phase is concerned with financial sector regulation and competition.

For those of you who are not economists, let me reassure you by saying that I am not one either. But good economics is the product of good governance, and that is something I do know a thing or two about.

The main aim of the Central Banking Act 2000 was to ringfence the Bank of Papua New Guinea and protect it from political interference. Remember the context in which the new Act came. There had been a circular door of governors. BPNG’s first Governor, Henry ToRobert, served with distinction for 20 years. But then we had four governors in four years. Moreover, the major function of the central bank had become to finance the government’s deficit, contributing to the high inflation and rapid depreciation of the time.

How did we protect the central bank? The 2000 Act removed politicians’ discretion over the Board. Most Board members were now selected as representatives – representing the church, or the unions, or business. The Act also gave a fixed tenure to the Governor: a maximum of two seven-year terms. The Act also made it virtually impossible for the government to sack that Governor. The new Act then gave the Governor responsibility for all the policy issues that came before the bank, whether relating to monetary policy or financial sector regulation. The new Act also banned central bank deficit financing. Finally, the new Act gave BPNG a single, clear objective: to control inflation.

Looking back over the last 20 years, the stability the new Act brought is obvious for all to see. Since the Act was passed there have only been two governors. One is my colleague on the IAG, Sir Wilson Kamit, who served from 1999 to 2009. The second is the Governor Loi Bakani, who served from 2009 to 2021. Currently we have an Acting Governor and obviously that is an issue that this government needs to address. But two governors over 20 years is a lot better than four governors in four years. Of significance is that both Mr Bakani and Mr Popoitai also served as Deputy Governors for a considerable time. And their appointment as Governors is evidence of the stability dividends from the Morauta reforms in the most critical regulatory, policy-making and implementation institution in the country.

On inflation, to the bank’s credit we have seen much lower inflation over the last 20 years than we did in the nineties.

So there have been definite positives, but there have also been negatives, and things we can learn from.

Central bank performance over the last two decades has certainly not been above reproach. Despite the ban on government deficit financing in the 2000 Act, the central bank began to engage in this practice yet again from about 2013 to 2016 under what was called the “slack arrangement”.

More recently, I’m sure you’ve heard of the complaints of business leaders about the difficulties of getting hold of foreign exchange, and how this is slowing down the economy. One thing many people don’t realise about the 2000 Central Banking Act is that it took management of the kina and foreign exchange matters out of the hands of government, and into the hands of the central bank. So these difficulties are squarely a central bank responsibility. What economists call currency convertibility used to be a foundation of economic policy in PNG. That meant, if you imported goods into PNG, and you needed foreign exchange, you could get it. Not anymore. Now we have not convertibility but rationing. This has been very bad for business, and is one reason why growth has been so slow in recent years and employment has been falling.

There have also been problems over the last 20 years in the financial sector which BPNG is also responsible for. BSP [Bank of South Pacific]’s success was born of the Morauta era, as the government’s decision to privatise the PNG Banking Corporation led to its purchase by BSP. BSP certainly did a great job of turning the loss-making, corrupt Banking Corporation around, but it can’t be good for our country to have one bank so dominant, and to have so little competition between banks.

So, a mixture of successes and failures. Our job was to look at the 2000 Central Banking Act and work out how to build on the successes and address the failures.

What did we recommend? Well, as I mentioned we are only half way through. We submitted our first-phase report at the end of last year and are currently working on the second phase. I am happy to report though that the government has acted on our report, and has already amended the Central Banking Act. They didn’t act on all our recommendations, and of course that is their prerogative, but I’m glad to say that they did act on many. So many reports produced in and for PNG sit on the shelves gathering dust and not much else. I’m glad this wasn’t one of them.

So what were our recommendations? In the second part of this blog, I’ll highlight five of the most important.

This is the first part of a two-part blog based on the author’s keynote speech at PNG Update 2022, ‘Revisiting the Morauta reforms: modernising PNG’s Central Banking Act’.

Robert Igara
Robert Igara is Chancellor of the University of Papua New Guinea, and former Chief Secretary to the PNG Government.