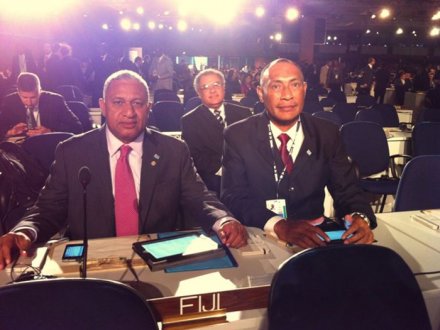 Rio+20 and the Pacific: failure or progress?

Last week, the world gathered for the largest UN conference ever with over 130 heads of state and tens of thousands of delegates from civil society, government and the private sector.

The Pacific featured prominently at Rio+20 with heads of state from ten of the fourteen independent Pacific island countries (PICs) participating. The independent states that did not send heads of state were Papua New Guinea and Nauru—due perhaps to recent political instability—while the Cook Islands and Niue did not gain speaking rights due to UN General Assembly Resolution 66/197 (2011), which limited the participation at Rio+20 to full UN member states.

As predicted, the summit did not achieve a binding multilateral outcome. The outcome document is largely vague, verbose and unambitious, lacking the teeth required for achieving the required environmental improvements that are overwhelmingly suggested by science.

Because of this weak outcome, many NGOs and some states declared the summit a failure.

Yet, important progress was made on many fronts. Rio+20 has echoed other international environmental negotiations—particularly the United Nations Framework Convention on Climate Change—in a move toward a bottom-up approach with non-binding mechanisms, and this is symptomatic of a divided international community incapable of delivering strong collective action solutions.

There was progress made on a number sustainability issues important to the Pacific, including: (1) voluntary commitments by PICs to protect their oceans and increase renewable energy generation, (2) deepened regional cooperation on small island developing states (SIDs) issues, (3) comparatively better text on oceans and SIDs in the outcome document, and (4) interesting proposals put forward to circumvent blockages in the international system.

First, a surprise that came out of Rio+20 was the importance of voluntary commitments. The UN reported that US$ 513 billion was mobilised and 692 commitments were made by states, civil society, the private sector and universities.

While one might question the firmness of these estimates, this indicates that the bottom-up approach has undoubtedly become a key part of the global process.

A number of PICs made ambitious commitments [pdf]. For example, a regional framework aiming to conserve an area of the ocean more than four times the size of the United States was announced by the PICs.

Second, there was also a push for more cooperation between the Pacific, Caribbean and African SIDs on the particular sustainability issues faced by island countries. And for strengthening regional relations, two MOUs were signed between the Indian Ocean Commission (IOC), the Caribbean Community Climate Change Centre (5Cs) and the Secretariat of the Pacific Regional Environment Programme (SPREP).

Third, while the outcome document is largely inconsequential, this is the first time a UNCSD document has focused strongly on oceans. There was progress made in regard to high seas governance and marine pollution; with SIDs, Brazil and the European Union pushing for a coordinated solution to be developed within two and half years.

Moreover, the reaffirmation in the outcome document of the SIDs as a special case for sustainable development—alongside the less developed countries (LDCs), landlocked developing countries and Africa—is a notable outcome and was welcomed by the Pacific island delegates.

Last, Rio+20 had over 500 official and side events, providing an opportunity for states and stakeholders to collaborate on issues through policy transfer and collective innovation.

One such proposal—made by a SIDs Permanent Representative to the UN in a side event I attended—was incentivising the establishment of marine protected areas through debt-to-nature swaps [pdf]. While this is not a new approach, it is also not widely known. And thus it is important to reiterate such proposals, especially to SIDs, which have endemic government capacity constraints and require creative solutions to overcome sustainability challenges.

More could and should have emerged from Rio+20. But the progress made in Brazil should not be undervalued, and these developments will hopefully serve as strong foundations for achieving future sustainable development.

Benjamin Sims is a researcher at the Development Policy Centre and attended Rio+20 with the ANU Student Delegation.