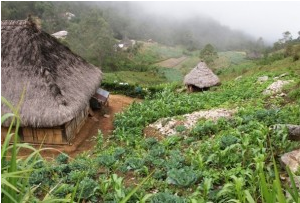 Rural development in Timor-Leste: some alternatives to decentralisation

Timor-Leste’s decentralisation process is steadily moving ahead. In 2014, Decree-Law no. 4/2014 clarified the new decentralised governance structures, and in January 2015, a Social Market Economy Special Zone was formally established in one of Timor Leste’s thirteen districts, Oé-cusse, which has been granted a special autonomous status by the government. However, decentralisation, as I have written elsewhere, is hamstrung by a lack of systems and trained human resources at the district level. It will thus have little impact on rural development in the short term. What else can Timor Leste do to foster rural development?

Last week, the government made changes to its overall 2015 budget, reducing support for two particular decentralisation programs, the PNDS (Programa Nasional Dezenvolvimentu Suku) and PDID (Planeamento Desenvolvimento Integrado Distrital). However, the government is still devoting a high percentage – around 35% – of the budget to infrastructure development. This is more promising than its decentralisation strategy because expanded infrastructure has immediate spin-off effects. It improves access to services like banking, health and education and it facilitates small business.

Improvement in telecommunications is already having an impact on rural banking. The National Commercial Bank of Timor-Leste (BNCTL) has expanded its services so that it now has branches in all thirteen districts. Another bank, BNU Timor, has started an experimental program that allows customers to make payments, transfers and withdrawals via their mobile phone with a limit of US$300 per transfer and US$400 per withdrawal. This means that as telecommunications infrastructure expands, so does rural access to banking services.

Improvement in telecommunications is also impacting on health and education. To expand rural people’s access to midwives, the Ministry of Health has teamed up with NGOs to run the Liga Inan program. The program facilitates text message communication between midwives and pregnant women to allow for the exchange of information and an increased probability of a midwife attending births. Emergency services also rely heavily on mobile phone communication to hear about emergencies. As telecommunications infrastructure improves, these mobile-phone-based services can reach more people. The government’s Strategic Development Plan, 2011–2030 [pdf] also specifies that, by 2015, “All schools, health posts and health clinics will be connected to the internet.” This target may be reached a few years later than planned. However, when it is achieved, the internet will not only help teachers and medical professionals with their services to the public, but might even serve as a leisure pursuit that helps retain such professionals in isolated villages.

Expansion of electricity and road networks will also have spin-off effects. The government originally planned for everyone in Timor-Leste to have access to reliable electricity 24 hours a day by 2015 [pdf]. Whenever these targets are achieved, the electricity supply will improve the ability of students and other people to work at night, widen the use of mobile phones and computers, and allow refrigeration and other electric equipment to be used by health services and small businesses. Improved roads mean reduced costs of travel and transporting goods. If coupled with appropriate incentive structures, improved roads may even encourage public servants to travel more often to rural areas or to service a wider area in a day’s travel.

These infrastructure programs seem more beneficial, in the short term, than decentralisation. Besides infrastructure development, the government can improve rural economies by attracting investment. One model is the Special Social Market Economy Zone in Oé-cusse, which hopes to attract private investment through high quality infrastructure and the creation of a free trade zone, with exemption from nationally collected taxes. Another model is the Public Private Partnership, whereby the government is sharing the costs of large scale infrastructure projects, like expanding the airport in Dili and the port in Tibar. These costly approaches could also be used to attract private investment to other parts of Timor Leste.

A less costly model for other districts is that of public-private joint enterprises, with the government investing smaller amounts with the aim of building profit-making businesses rather than infrastructure. The involvement of private investors would help make the business more efficient. The involvement of the government would reduce risks for private investors by allowing any profits in the start-up phase to be taken wholly by the private investor, with profit-sharing only required at a later stage. Government involvement could also draw on wide support from a variety of public offices to help the business succeed. The risk of collusion in the selection of private enterprises could be reduced by ensuring the selection process is transparent and based on clear, objectively measurable criteria.

Though the government would in effect be subsidising the private investor (local or foreign) during the start-up phase, it and the wider population would gain in other ways. Increased employment outside Dili could help reduce crime, tensions within families (which can lead to break-ups and gender-based violence), and even the unsanitary overcrowding in Dili. It could also allow people to gain new skills and lead indirectly to many new businesses as more money circulates outside Dili.

As an illustration, two districts that offer much scope for medium-scale public-private joint enterprises are Liquica and Ermera. Liquica has potential for a wide economic base. It has tourism potential, with its beaches and easy access to Dili. It could even be a stop-over for tourists on their way overland to and from Indonesia. A resort could be built near the lake and fort at Maubara, possibly in the same location where the Indonesians built a resort in the 1990s. Ermera and the hills of Liquica District have coffee. They also have some of Timor-Leste’s highest rainfall, with their hills deemed suitable for aquaculture [pdf]. They could thus supply fresh-water fish to Dili markets. Liquica District could also be home to fishing fleets. The national government could partner with a private investor to set up a cold storage warehouse and transport facility near the aquaculture ponds or the fishing fleets. Other business ventures aimed at the Dili market or international market could be a fish processing facility on the coast of Liquica District, a coffee processing facility in Ermera District, a commercial fishing fleet based at Tibar, a winery in Liquica and a copra processing facility in Liquica. In February 2015, Timor-Leste’s National Parliament allocated USD $500 million to develop port facilities in Tibar village so that local businesses could store or ship out their products.

If sufficiently large urban centres can be developed around Baucau or on the south coast, these too could become major domestic markets and export routes.

Whilst many of these business ideas have already been trialled by NGOs, these organisations have generally been more effective at promoting food security and small-scale business development than larger scale business development. This may be because of short time-lines and their close focus on the poor, without involving others who have management skills and capital. NGO programs and government policies since 2002 have so far led to only minimal private investment outside Dili, and decentralisation will have little economic impact in the short term.

It would be politically damaging for Timor Leste’s new Prime Minister and socio-economically damaging for Timor-Leste’s rural poor if the government’s only strong economic revitalisation program was in Oé-cusse. The keys to rural development, at least in the short term, lie in high-quality, rapidly expanding infrastructure and in finding new ways to promote private investment.

Dr Terry Russell worked with the UNTAET mission in East Timor in 2001–2002 and has, as an NGO worker and consultant, made regular visits to Timor-Leste since its independence.