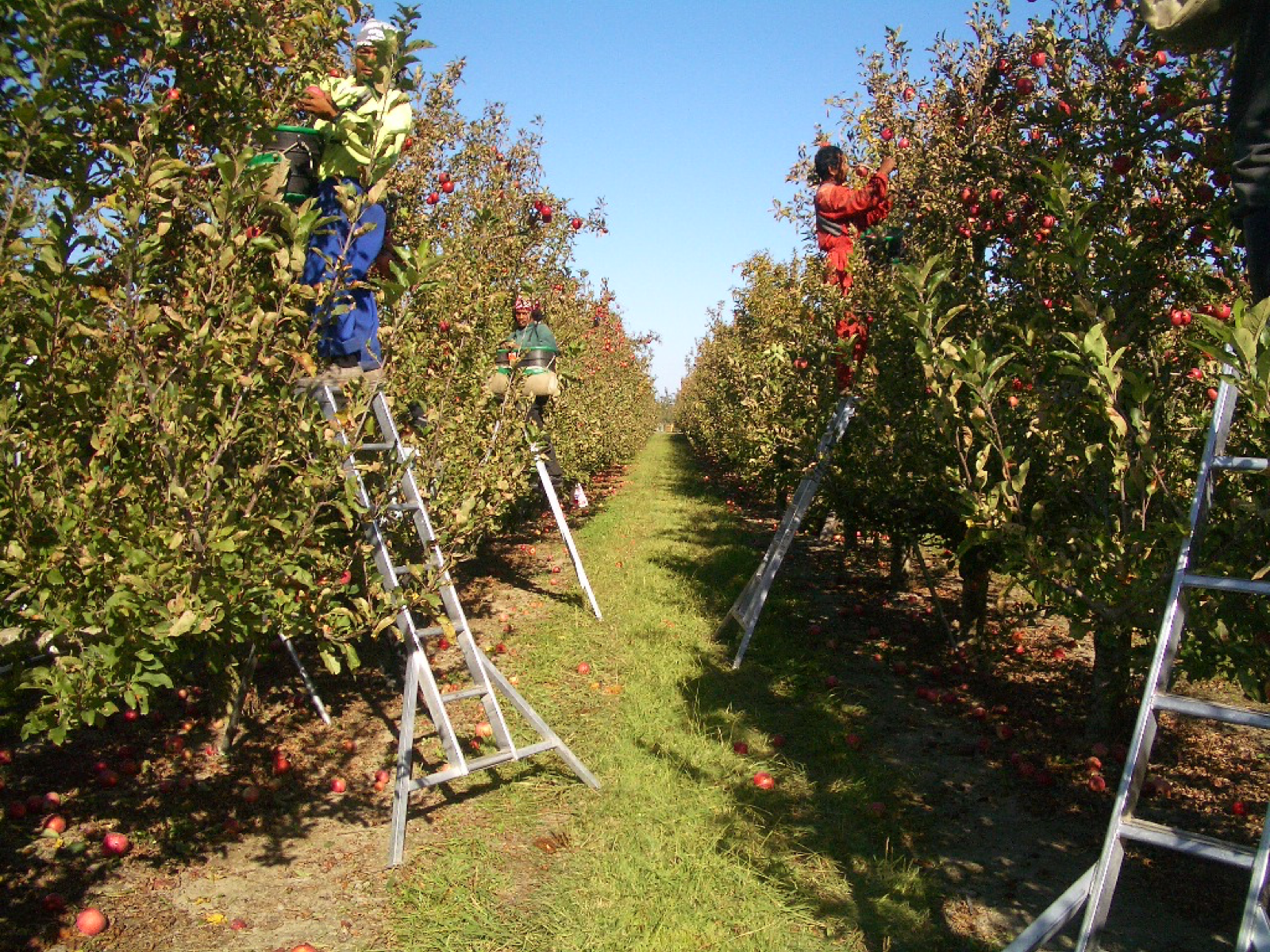 Samoa has consistently been one of the top three suppliers of labour under New Zealand’s Recognised Seasonal Employer (RSE) scheme since its introduction in 2007. During the COVID-19 pandemic, when only a small number of Pacific countries participated in the 2021 border exceptions and subsequent quarantine-free travel arrangement, Samoa’s dominance, alongside Vanuatu’s, has strengthened (Figure 1).

Samoa also participates in Australia’s Seasonal Worker Programme (SWP) and the longer term Pacific Labour Scheme (PLS) – now aligned under the single Pacific Australia Labour Mobility (PALM) scheme. During the pandemic, the numbers of Samoan workers heading offshore for PALM employment have grown substantially. For the Samoan government, the recent increase in people leaving the country for temporary work is causing some concern. 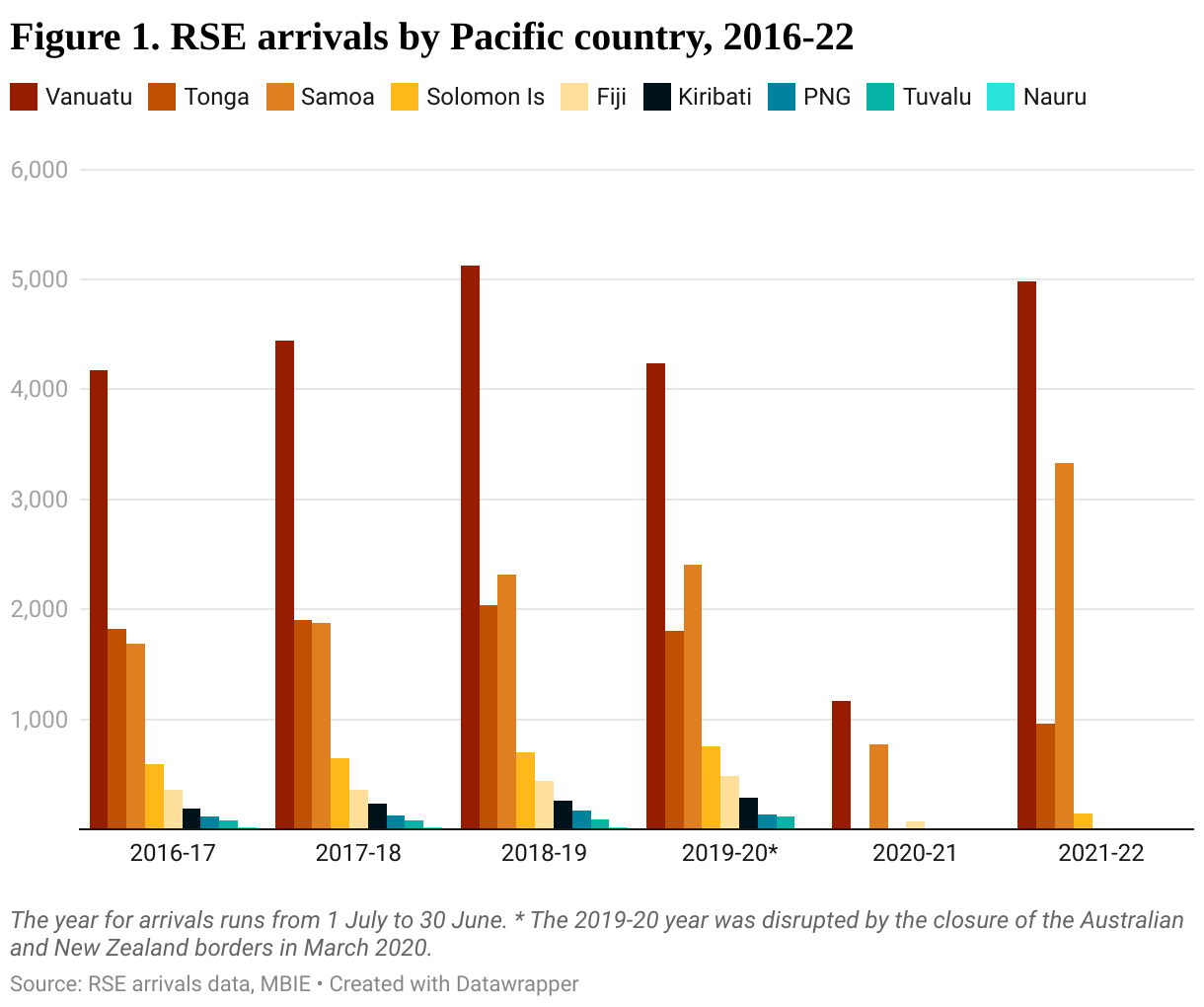 Pre-COVID, the numbers of Samoan workers participating in the RSE scheme were slowly but steadily increasing year-on-year, reaching a total of just over 2,400 in 2019-20. In any given year, Samoans would account for 15-20% of total RSE arrivals.

RSE employers with little or no previous experience in recruiting from Samoa sourced their workers from the country in 2021-22 when unable to recruit from their usual source country(s) due to COVID-related restrictions. Of the 64 employers who recruited Samoan workers, 25% (16) were “new” employers who had not recruited from Samoa in any of the previous three seasons.

There was also a much higher incidence of new recruits in the Samoan workforce in 2021-22 than in earlier years. Generally, employers prefer to recruit return workers because they have acquired the relevant skills and experience to do the job, and are therefore more productive than new recruits. In 2019-20, for instance, 73% (1,765) of the 2,408 Samoans recruited were experienced returnees.

In 2021-22, however, almost two-thirds (63%) of the 3,334 workers recruited were inexperienced workers taking up RSE employment for the first time. This increase was driven by several factors:

For RSE employers, the high incidence of new recruits in 2021-22 will likely have impacted overall worker productivity. More time and resources will also have been invested in training new recruits than is the practice in a normal RSE season. Nevertheless, the upside is that employers now have a large pool of over 3,300 experienced RSE workers to draw on for the 2022-23 season, an attractive prospect as employers plan ahead for their future recruitment.

New Zealand is only part of the story; Australia is another.

Samoa’s participation in Australia’s SWP and PLS was relatively limited in the years preceding the pandemic. Before March 2020 when Australia closed its international border in response to COVID-19, fewer than 700 SWP visas were granted each year to Samoan workers, accounting for around 5% of annual SWP visa grants. Under the PLS, fewer than 200 visas in total were granted to Samoan workers between 2018 and 2020 (Figure 2). 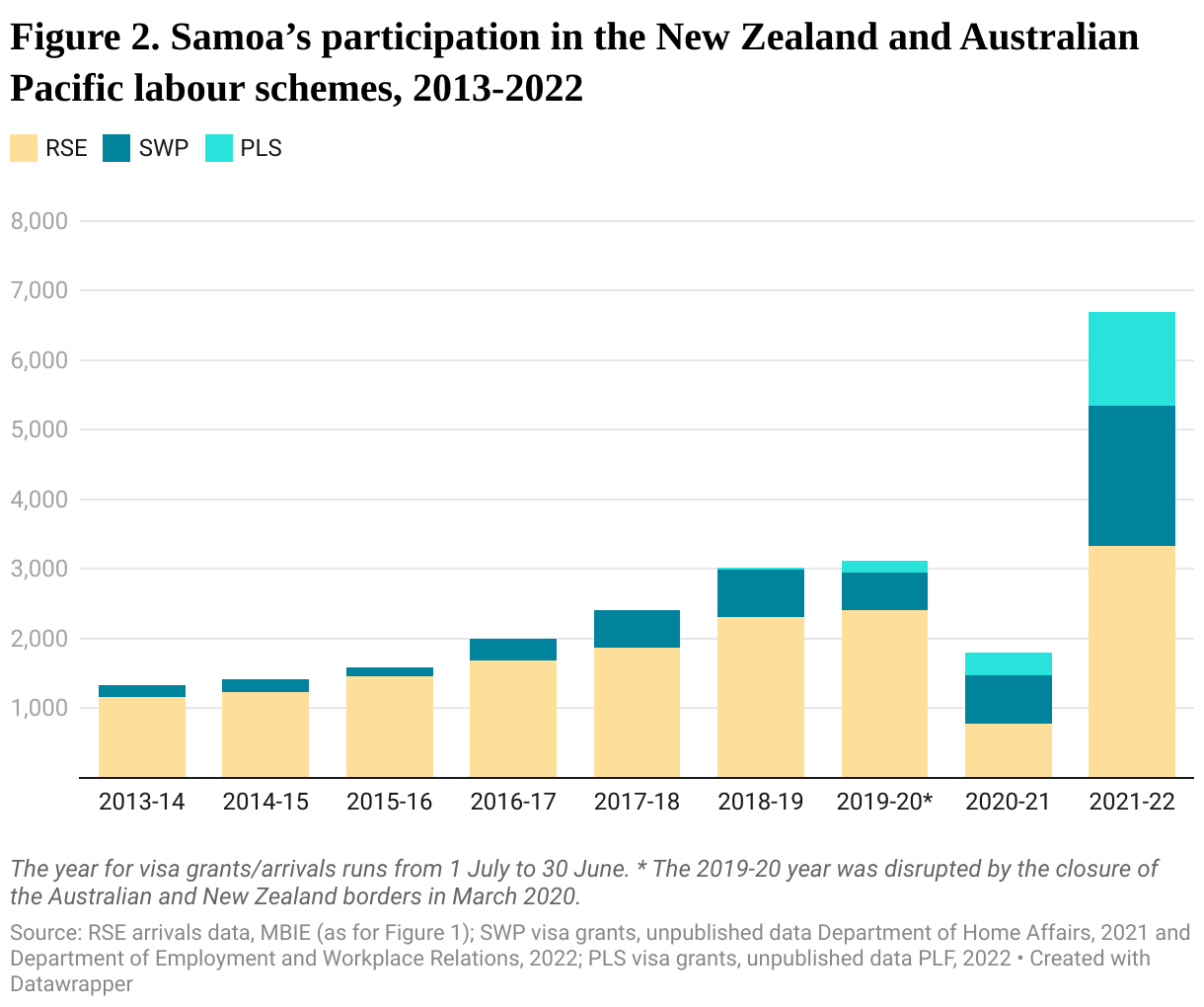 When Australia resumed recruitment of SWP and PLS workers in late August 2020, following a five-month period of COVID-related travel restrictions, Samoa was one of the countries prepared to mobilise workers. Subsequently, Samoa has experienced significant growth in SWP and PLS numbers.

When the numbers under the Australian and New Zealand schemes are combined, over 6,600 Samoans were recruited during 2021-22 – more than double the total number (3,114) of Samoans recruited for the three schemes in 2019-20.

Looking ahead, there is no shortage of demand for Pacific labour, including from Samoa:

With the rapid growth, and potential for further increases, in labour migration numbers, it comes as no surprise that the Samoan government has commissioned a review into the country’s participation in the New Zealand and Australian schemes. Processes for worker selection – historically, largely left to accredited employers – are under review, along with an examination of some of the impacts of the loss of labour on Samoa’s domestic labour force.

The Samoan government has also elected to impose a maximum limit of three-year contracts on Samoan workers participating in the PALM scheme, rather than allowing workers to remain for up to four years – the current maximum under PALM policy settings.

Beginning today, Samoa will host the 2022 Pacific Labour Mobility Annual Meeting (PLMAM), an event that brings together stakeholders from across the Pacific region, including New Zealand and Australia, to advance regional cooperation on labour mobility. PLMAM will be an ideal opportunity for Samoan officials to further reflect, in dialogue with other country partners, on their engagement in the Pacific labour schemes and on their future priorities.