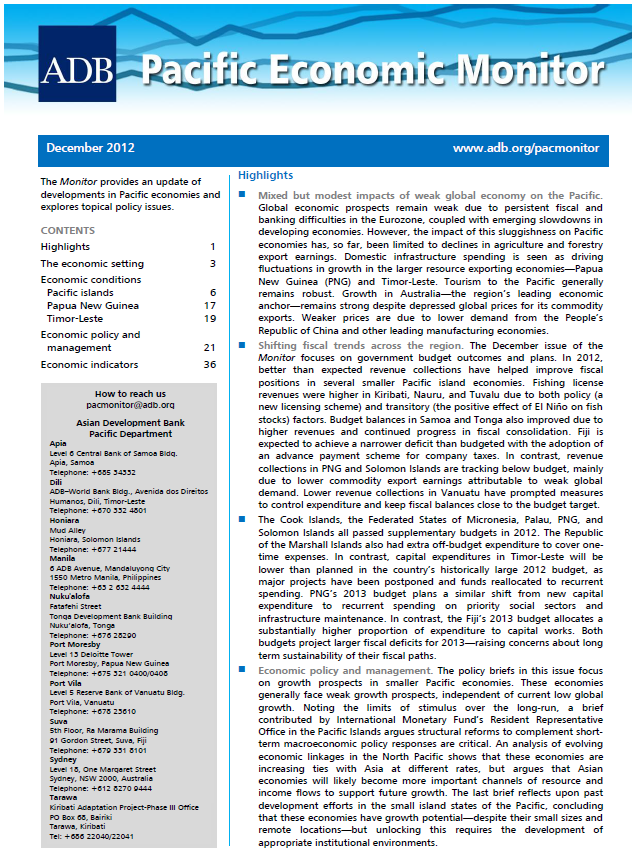 Shifting fiscal terrain in the Pacific?

By Christopher Edmonds and Emma Veve

The latest issue of Asian Development Bank’s (ADB’s) Pacific Economic Monitor, released last week, focuses on government budget outcomes and plans, and finds some reversals from recent years’ fiscal trends. The larger resource exporting economies of the region (e.g., Papua New Guinea, Solomon Islands), which have generally enjoyed much higher growth and rising government revenues in recent years generally saw tougher times in 2012.  In contrast, the smaller Pacific island states that have struggled both in terms of low growth (generally in the 1-2 percent range) and difficult fiscal conditions saw rising revenues and in a few cases reduced fiscal deficits or rising fiscal surpluses. The fiscal trends in the larger resource exporting economies seem largely to be a reflection of falls in the prices of key export commodities.

The fiscal positions of several smaller Pacific island economies improved in 2012. In Kiribati, Nauru, and Tuvalu, revenue collections were higher than expected, boosted by a new fishing license scheme and transitory effects of El Niño on fish harvests. Samoa and Tonga saw their fiscal performance improve as a result of higher revenues and continuing fiscal consolidation. Fiji is also expected to achieve a narrower deficit than budgeted due to its adoption of an advance payment scheme for company taxes. One hopes this represents laudable progress in improving their fiscal management, which ADB and many development partners active in the Pacific region have devoted considerable technical assistance to improving, but it would be premature to reach any conclusions about this until time tells if the fiscal improvements can be maintained despite the serious structural challenges small Pacific island states face in managing their fiscal affairs (e.g., small size that make economies of scale hard to achieve, relatively remote locations, and vulnerability to natural calamities).

A key question in regard to the improved revenues of the small Pacific islands going forward is the extent to which 2012 budget outcomes reflects a structural rather than a cyclical phenomena. Clearly, the impact of the El Nino on fish migration patterns and fish harvests in the Pacific is cyclical. The impact of the new fish licensing scheme, however, may represent a structural shift but more information and analysis of the new scheme is needed before any conclusions can be drawn about its long term impact.

Unfortunately, fiscal developments in the Pacific region in 2012 were not all positive. The fiscal positions of Papua New Guinea (PNG), Solomon Islands, and Vanuatu all deteriorated in 2012, as softer global demand resulted in lower than budgeted revenue collections tied to commodity export earnings. Vanuatu’s lower revenue collections are prompting measures to control expenditure and keep fiscal balances close to the government’s budget target. Despite this deterioration, it remains the case that the resource exporting economies continue to outperform their small regional neighbors.

There were notable differences in response to higher than expected revenues in the smallest countries. Some, such as Tuvalu, used the windfall to present a year-end budget surplus and continued along the essential path of fiscal consolidation. Others used the windfall to support additional expenditure, for example Kiribati‘s 2012 expenditure is expected to be 14% above budget as Government paid down its overdraft (i.e., reduced debt).

The 2012 budget outcomes highlight the fragility of these economies and their fiscal positions, and the need to support revenue stabilization funds and for governments in the Pacific to strictly control expenditures. One factor key in many of the Pacific budgets in recent years has been budget support from development partners. For example, in 2012 ADB provided a policy-based grant to Tuvalu which will help replenish the consolidated investment fund for use in balancing future budgets.

The latest issue of the Monitor also examines the next year’s budget plans for those Pacific countries that have released their 2013 budgets. PNG’s budget for next year continues the shift from new capital expenditure to recurrent spending on priority social sectors and infrastructure maintenance. The planned 23% increase in expenditure is well timed to counter falling domestic demand as LNG construction begins to wind down next year. The real challenge will be in budget implementation, and converting significant expenditure plans into tangible improvements in public services. While the large increase in funding to provincial and local government will more directly transfer funds to rural areas, it will strain the capacity of the provinces. Furthermore the potential to maintain expenditure growth beyond 2013 is questionable given the expected significant slowdown in government revenue growth over the medium term.

Turning to Fiji, the 2013 budget plans a significant increase–in terms of both the level of expenditure and proportion of total government expenditure–on capital works, to upgrade the country’s infrastructure in advance of future higher growth. But, in recent years, Fiji has struggled to fully expend its capital budget–having only done so for the first time in 2012. The public administration managing public works and a construction sector, whose capacities already appears to be stretched, will be fully stretched if Fiji is to implement a significant capital expansion. Financing of the expected 2.8% of GDP budget deficit is also a concern in light of the rising debt, and the government’s guarantee of the national airline’s purchase of new aircraft.

Even with the progress we are seeing in terms of improved fiscal management in the Pacific, budget support is expected continue to play a significant role in the Pacific public finances. The Cook Islands, Marshall Islands, Samoa, Solomon Islands, Tonga, and Tuvalu include or are expected to include budget-supporting loans or grants from ADB in their FY2013 or FY2014 budgets with the majority of these also looking to additional budget support from other development partners during this period. Backstopping this continued support, ADB, AusAID, IMF, and others, are continuing to work with Pacific governments to improve their economic forecasting and fiscal management to build upon earlier efforts that may have borne fruit in the positive budget developments in some of the smallest Pacific islands counties this year.