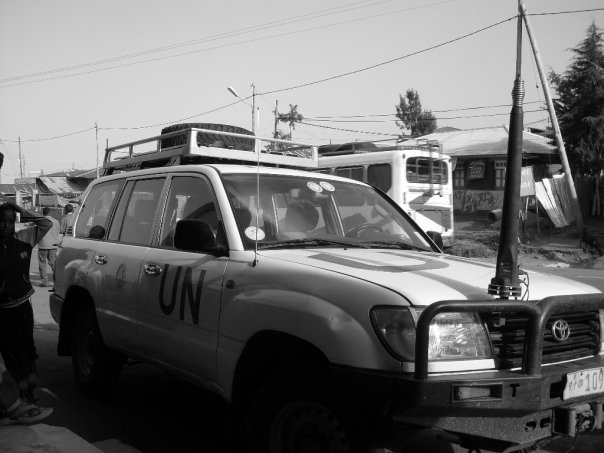 In May last year a friend lent me their jeep while they went home to Australia for a holiday. Large and white, it was a development archetype – one of the famed vehicles that signal the arrival of aid workers everywhere on Earth. It was also a god-send. At the time I was in the process of organising permissions for my PhD research, which meant shuttling from office to office and from one end of town to the other. I had been travelling by bus, taxi and on foot, which was rapidly wearing me out. Upon the arrival of the jeep, slow, stop-start commutes were replaced by air-conditioned travel into town in under 10 minutes. Hillside suburbs were now easily accessible and, all of a sudden, I could get several things done in a morning.

And yet, at the same time the jeep created barriers. Instead of saying good morning to the street sellers who I walked past on the way to the bus stop, I now trundled past them encased in a vehicle they could never afford. I’m not going to pretend that before the jeep I was living as the locals do. I wasn’t. But, for all the comfort it brought, my newfound private motor vehicle did, at the very least, contribute to the gulf that existed between my life and theirs.

Nowadays, I’m back on the bus, with all the additional tiredness that this brings to my life, but I was reminded of my jeep driving days when reading of the recent furore associated with Oxfam closing the pool in its guesthouse in Nairobi. The guest house is run on a for-profit basis by Oxfam (who then use the profits to fund aid work) and its clientele is predominantly aid workers. The pool wasn’t custom fitted by Oxfam – it came with the guest house property. On one hand Nairobi is hot and dry, and having a pool to soak in must make aid workers’ lives somewhat more pleasant. On the other hand Nairobi is hot and dry, so hot and so dry that it has been in the middle of a drought. The water used to fill the pool has no material impact on the drought itself but it was thought that aid workers soaking while the rest of the country baked would be a bad look, and so the pool was closed.

And in their different ways, my jeep and Oxfam’s pool tap into an aspect of aid work that is rarely talked about but also the subject of profound discomfort amongst many aid workers: the difference in living standards between aid workers (at least most of the time) and the people who they work with.

In Honiara the differences are readily apparent: while much of the city lives crowded into informal settlements, most aid agency staff enjoy comfortable residences nestled the various hillside suburbs nestled behind the town (for the record this PhD student hasn’t quite made it into the hills but can be found in a very comfortable room, just a short dash from the cooling Pacific ocean).

There are three reasons why I think we find aid opulence discomforting.

The first is financial: every dollar that is spent on residences for aid agency staff could, in theory, be spent on vaccinations, or roads, or nurses, or teachers or other actual end products.

The second reason is to do with information: isolated in enclaves it can be hard for aid workers to stay in touch with the real needs of the people they work with.

The third is to do with local perceptions: aid discourse may be all about partnership and this may be genuinely intended by aid agencies, but when aid staff lead isolated and lives of astounding affluence (by local standards) this would seem likely to undermine ideals of equal partnership, at least in the minds of aid recipients.

Above and beyond this, I think a lot of people feel uncomfortable, simply because it feels wrong to be experiencing comfort in the midst of such profound lack.

These are all good reasons for concern. But on the other hand, there are also very good explanations for why the discrepancies exist.

There’s safety for a start: Honiara’s not particularly dangerous, but home invasions occur and expats have been murdered over the years. And other aid destinations (think the large cities of Africa or Latin America or Port Moresby) are often very dangerous. Safety necessitates enclave living.

There’s also exhaustion. People living in the comfortable, orderly, temperate cities of the average donor country may scoff at this. But the fact of the matter is that aid work is often hard work. And living in most developing countries can be profoundly exhausting. Although, as I learnt, creature comforts can ease this to some extent. And, given how hard most aid workers work, it seems unfair, not to mention ultimately inefficient, to expect aid workers to spend their entire careers in a state of uncomfortable exhaustion.

Finally, urban areas in most developing countries are often cleaved by deep economic inequality. There often isn’t much in the way of middle class living for aid workers to be inserted into. Meaning, that affording aid workers some degree of comfort and safety often requires going all the way to affluence.

This doesn’t excuse every excess that occurs in the world of aid. Some consultants are paid far too much for example. Or, in the case of Honiara, a reasonable number of short term aid workers end up in the city’s most expensive hotel, when they could be accommodated just fine in other nearby hotels for quite a lot less.

Nor do my justifications in the second half of this article mean that the sources of discomfort that I raised aren’t real. They are. But I guess that this is – for the most part – an inescapable aspect of the deeply unequal world that we live in: the fact that even attempts at doing good often bring with them huge inequalities of their own.

[Update: Marianne Bevan has an excellent and very eloquent post on this topic at her blog, elevenhoursabroad. Very highly recommended; read it here.]