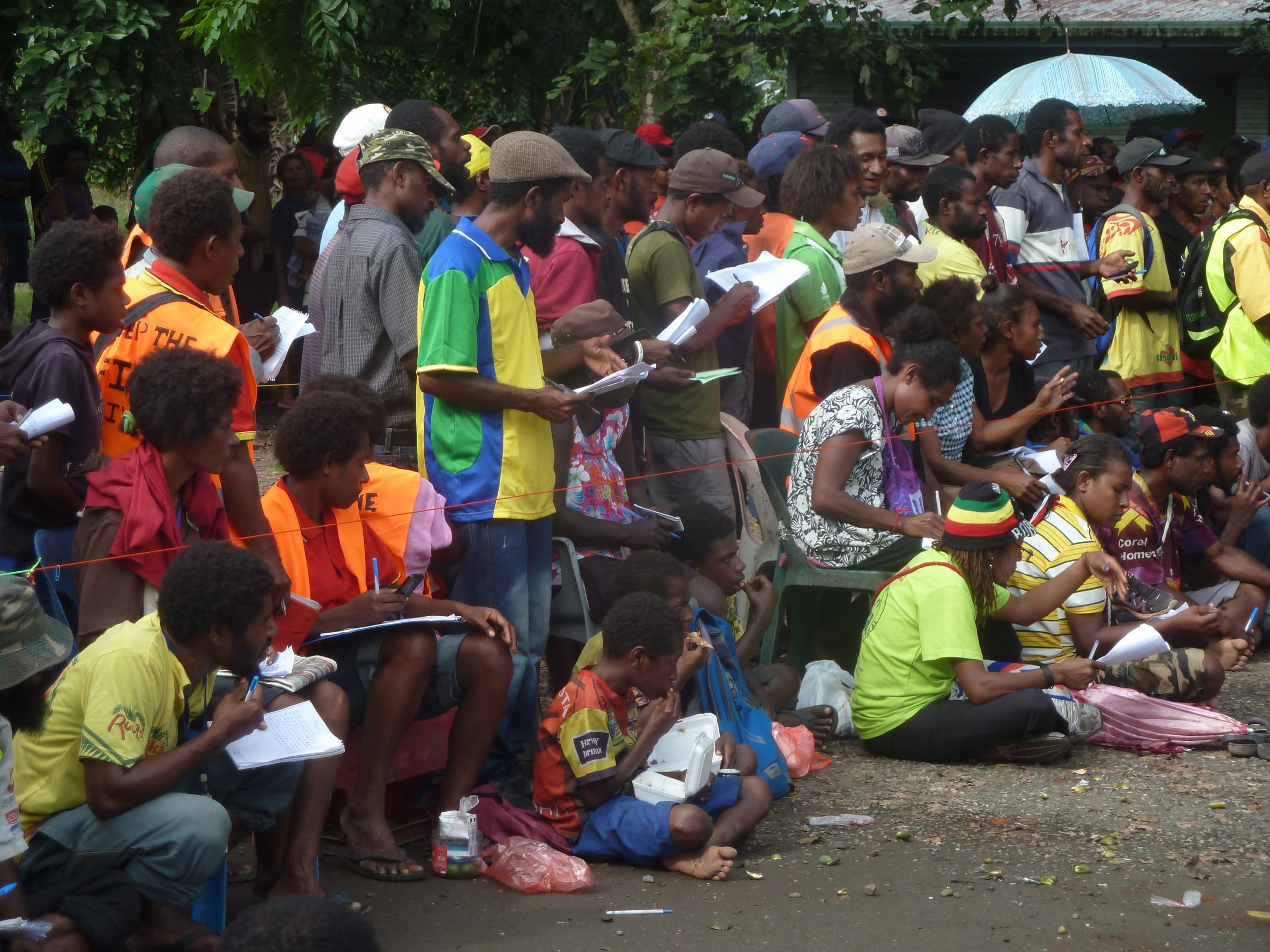 Scrutineers keeping watch in the 2017 election

Unlike First Past the Post – in which voters simply placed an ‘X’ by the name of the candidate they wanted as their MP – in LPV voters rank their three most preferred candidates. Votes are counted in rounds and in each round the lowest polling candidate is eliminated. With each elimination, the ballots of people who had selected that candidate as their top preference are reallocated to their next most preferred candidate still in the running.

Kuman has personal reasons to dislike LPV. In 2017, he saw his 4,050-vote lead shrink to just 391 as preferences were reallocated. Kuman isn’t alone in his dislike of LPV though: academics have argued about its merits since the 1990s.

In the early days, these debates were as much hypothetical as real: LPV hadn’t had time to prove its worth. But there have now been three general elections using LPV. Enough to assess its costs and benefits, and to answer a more practical question: is Kuman’s proposal a good one.

Frustratingly, some evidence remains elusive. Elections don’t come cheap in PNG. It would be useful to know how much LPV added to their price tag. Cost was cited by former Prime Minister Peter O’Neill when he proposed the country return to First Past the Post in 2018. (O’Neill now appears supportive of LPV.) LPV prolongs the time taken to count ballots, so must increase costs somewhat. Yet there isn’t enough public information to estimate exactly how large that ‘somewhat’ is. It’s true the cost of elections rose rapidly between 2002 and the first LPV election in 2007. But this was partly due to increased security after the violence of 2002. Election costs also grew considerably between 2007 and 2012, an increase that can’t be laid at the feet of LPV.

We’ve been told by aid workers previously based in PNG that the largest electoral costs come from polling station security and logistics. LPV’s longer counting process adds to this. But compared to overall election spending – at least from what we’ve been told – the increases probably aren’t outlandish.

There’s better evidence on another potential downside to LPV: vote buying. Vote buying has increased, something often attributed to LPV. LPV may have had an impact, but it’s unlikely to be the main cause. Vote buying has also increased considerably in neighbouring Solomon Islands even though it uses First Past the Post. A more likely culprit is something both countries have in common: the money emanating from extractive industries that sloshes around their politics.

One final downside of LPV is real but small. LPV is more complex. It’s easier for voters to make mistakes. In a 2019 study, we found (page 31) invalid ballots increased after LPV was introduced. But we also found the increase was small, and possibly falling with time.

LPV has come at a cost. But the costs aren’t huge. What about the benefits?

Anyone hoping LPV would transform PNG’s politics must surely have been disappointed by now. As we also showed in our 2019 analysis (pages 30 to 35), election results haven’t changed much. The vote shares of winning candidates have gone up, as would be expected given they now include reallocated second and third preferences. Vote shares haven’t gone up that much though: in 2017 the median winner still only gained 31% of all votes cast. And, tellingly, sitting MPs are losing elections as often as ever. To the extent that turnover rates reflect voter dissatisfaction with MPs, voters seem no more satisfied than they were under First Past the Post.

And although governance, as measured by the World Bank, did improve for a while under LPV, the trend started before its introduction, and reversed in 2014. 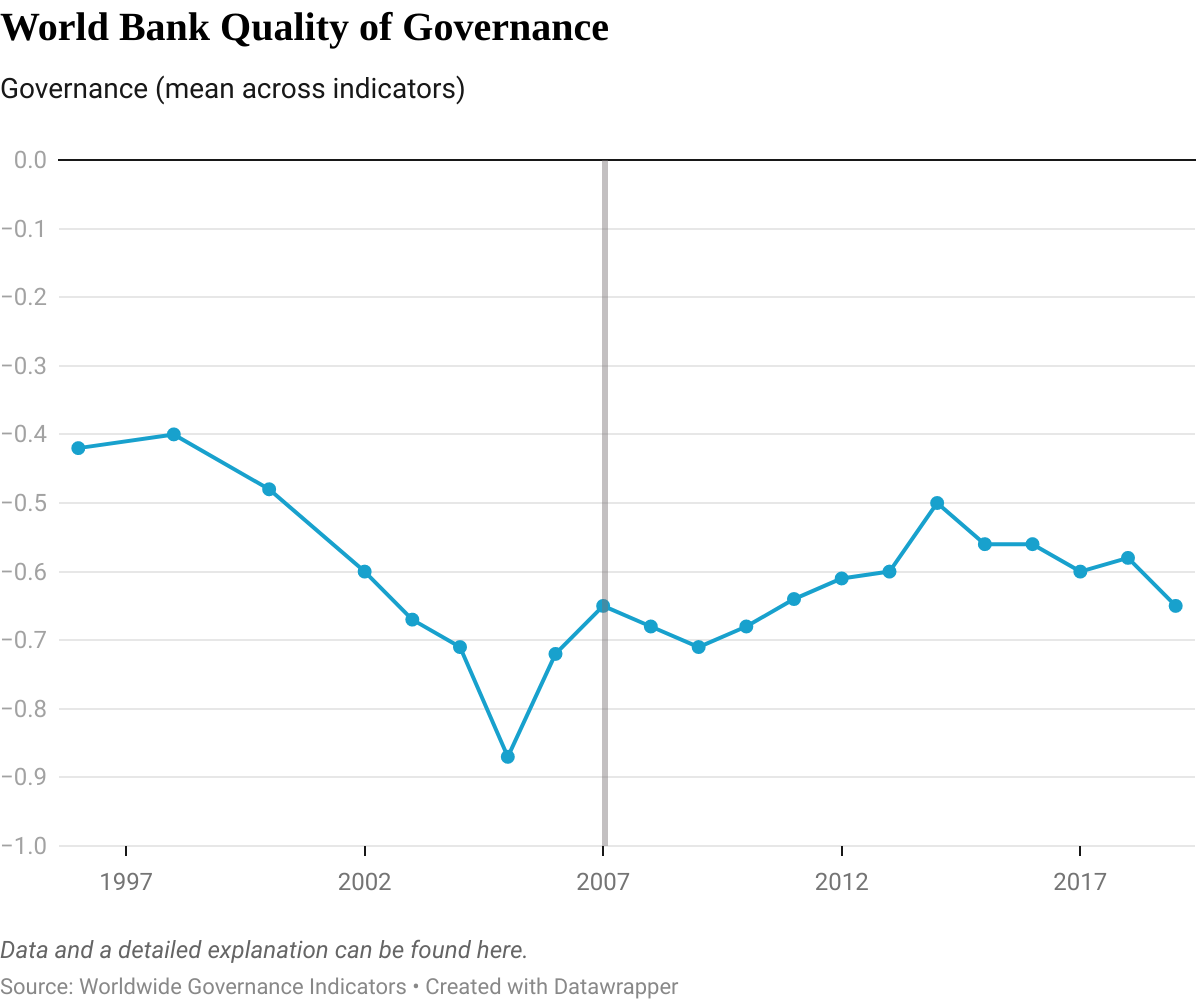 At first it looked like LPV had reduced electoral violence. This would have been a major achievement. However, violence flared badly in the 2017 elections. Perhaps matters may have been worse still without LPV. That seems possible given deteriorating law and order more generally. But, disappointingly, LPV clearly hasn’t eliminated electoral violence.

In these areas LPV has fallen short of what was hoped.

Yet there’s more to the story. When we studied results (page 36) we found evidence that, on average, LPV provided a small boost to women candidates. A small boost is no substitute for more substantive change. But it’s helpful.

We also found (pages 38 to 44) suggestive evidence that voters used their second and third preferences in the 2017 election to vote against the unpopular government of the day. In PNG, where politics is dominated by local concerns, voting focused on national issues, even if it only involves preferences, would be an important change. It’s too early to tell, and our evidence isn’t definitive, but it hints at genuine potential.

LPV also appears popular with voters. No one has surveyed people in PNG about LPV, or if they have, they haven’t made their findings public. (MP comments reported in a 29 August Sunday Chronicle article, which isn’t online, suggest the government conducted a survey of sorts in the past, and found majority support for LPV.) There certainly hasn’t been any sign of voter backlash, and focus group research found predominantly positive views. The reasons why voters like LPV often aren’t profound – an acquaintance told one of us he liked LPV simply because he was able to vote for all three cousins standing last election, sparing himself family friction. This isn’t transformative change, but if it helps voters, even in minor ways, and this makes LPV popular, it counts for something.

Combined, these achievements aren’t overwhelming. We wouldn’t advocate for LPV elsewhere. Yet, we think that, on balance, LPV’s achievements, and its apparent popularity, are sufficient grounds for keeping the system in PNG.

There’s another reason why it would be a mistake for PNG to abandon LPV right now. Even if Kuman isn’t motivated by his performance in 2017, other MPs may well vote using that calculus. That’s not how the rules of the political game should be written.

Electoral rules should only be changed through a structured, deliberative process, involving national public consultation, and clear assessment criteria. Anything else is just foxes redesigning the political henhouse.

Now is not the time for PNG to abandon LPV. The case for change is weak. And the process flawed.