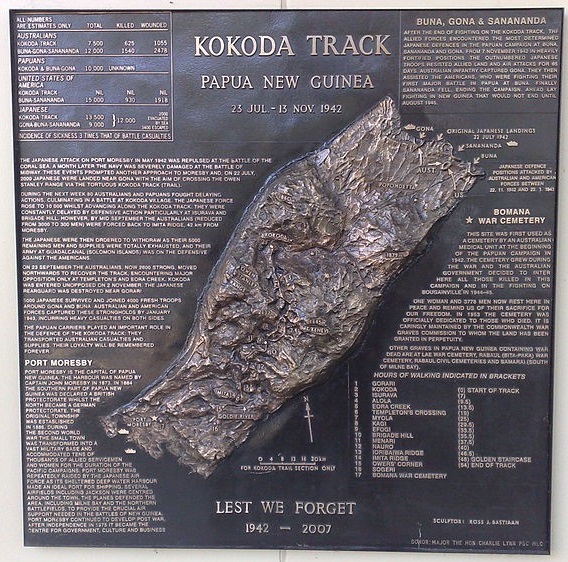 Significance of the centenary: history and commemoration of the Kokoda Campaign in Papua New Guinea

‘History’ and ‘commemoration’ are distinguishable terms. For instance, while Papua New Guinea (PNG) and Australia share a history spurred from the events of the Kokoda Campaign, our analyses, understandings, perspectives and experiences of the war are subjective and thus different. Commemoration is centred on the present and is concerned with the values that people in the present can derive from the events, good or bad, of the past. Although both history and commemoration are related to the past, they serve different functions. For different countries, the reasons for commemorating certain events will be similar, but the histories surrounding the events must be different because they inform different national narratives.

In PNG many a WWII cenotaph ends with the sacred remembrance parlance, ‘Lest We Forget’. Were this translated to Tok Pisin, it might read, ‘Yumi Noken Lus Tingting’, though this is currently not being done. WWII memorials, monuments or plaques in PNG are all written and emblazoned in English, which is partially reflective of where they are being made and the primary audience being targeted. The English version of the sacred remembrance phrase was taken directly from Rudyard Kipling’s 1897 Christian poem titled “Recessional”. Kipling himself was known to have taken his inspiration directly from one of the books of the Bible, Deuteronomy (4: 7-9), which reads:

7 For what nation is there so great, who hath God so nigh unto them, as the Lord our God is in all things that we call upon him for?

8 And what nation is there so great, that hath statutes and judgments so righteous as all this law, which I set before you this day?

9 Only take heed to thyself, and keep thy soul diligently, lest thou forget the things which thine eyes have seen, and lest they depart from thy heart all the days of thy life: but teach them thy sons, and thy sons’ sons;. (KJV Bible).[1]

After WWI, the phrase ‘lest we forget’ began to be used at the end of the ode of remembrance during commemoration services in Australia.

On Anzac Day in 1931, the Governor-General of Australia, Sir Isaac A. Isaacs, remarked in part:

In contemplating the event that it perpetuates, all distinctions that may divide the Nation are set aside, and unitedly we rise to render homage to the heroic band of Australians who, of the own free will, at Honour’s call, went out into the World War, and to resolve that we as a people shall be worthy of the sacrifice they made. In no way can we do so more truly than by keeping alive and in full activity the spirit that animated them. (Rabaul Times, 24 April 1931).

The Federal President of the Returned Soldiers League gave a similar message marking the 16th anniversary of the Gallipoli landings:

Anzac Day is Australia’s Nation Day because it was in consequence of the patriotism, valour and heroism of her citizen soldiers, who comprised the Australian Imperial Force, that Australia was elevated to Nationhood. (Rabaul Times, 24 April 1931).

War, honour and sacrifice are themes that surround larger notions of nationhood and national identity, and these hinge very much on memory politics, which is informed by public enthusiasm and discourse. The opening sentence of Sir Isaacs’ Anzac Day message in 1931 read:

Each year as it brings round to us again Anzac Day finds the commemoration of its origins more solemn, more majestic, and of fuller meaning for people. (Rabaul Times, 24 April 1931).

Today Anzac Day goes beyond the anniversary of the landing on Gallipoli in 1915. It is the day on which all Australians who served and died in all wars, conflicts and on operational service are remembered. The spirit of Anzac, with its qualities of courage, mateship, and sacrifice, continues to have meaning and relevance for Australia’s sense of national identity. Sir Isaacs’ belief in the aging solemnity of Anzac Day has generally been steadfast over the years, except a slight drop in public interest in the 1970s after Australia’s involvement in the unpopular Vietnam War.

The centenary of WWI and of Anzac Day in Australia is a case in point with heightened public interest in the commemorative events. Take for instance the trend of visitor and researcher interests in the Australian War Memorial (AWM) galleries and archives. Every year visitor and researcher interests spike in the two weeks leading up to and immediately after Anzac Day in April and Remembrance Day on November 11. In 2015, there was an unprecedented amount of public interest in the AWM archives and records, in line with the centenary of the Gallipoli landings. Similarly, there is expected to be a significant spike in public interest on the centenary of the end of WWI next year in 2018.

Australia is the primary market for tourism to Kokoda Track and these analyses are important for PNG. The suggestion and general trend is that centenary commemorations of WWII will see increased public interest in Australia. Accordingly, the Kokoda Campaign centenary from 2042 will attract a lot of interest from Australian tourists and those who have close historical links to the events of the war in PNG. The PNG Ministry of Tourism, Arts & Culture, under which falls the National Museum & Art Gallery, Tourism Promotion Authority and Kokoda Track Authority (among others), would do well to build up the atmosphere leading up to the centenary and prepare in advance for the centenary anniversaries. Yes, anniversaries, for the beginning and end of the whole conflict in Papua and New Guinea in 1942 as well as the commemorating of various key battles, particularly but not limited to, the Kokoda Campaign. An important part of the commemorations should be the end of the war centenary in 2045. The US bombed Hiroshima and Nagasaki in 1945, August 6th and 9th, respectively. The official surrender of Imperial Japan was announced on 15 August and the formal signing of the surrender document by the Japanese Foreign Affairs Minister took place on 2 September. The Cape Wom surrender took place eleven days after – technically it can be said that open hostilities of WWII effectively ended in New Guinea with the surrendering of the Japanese there, ending the New Guinea Campaign. The end of war and the beginning of the restoration of general peace is indeed worthy of commemoration.

The Kokoda Track ‘product’, though, is still effectively commemorating the Australian version of history. This is not necessarily bad. Economically, it is a product that the Ministry should continue to develop, as suggested, in preparation of the centenary celebrations. However, the Ministry should also support its departments and relevant stakeholders to develop a PNG version of the historical events worth having centenary celebrations about in all provinces of PNG, not just Port Moresby, come Remembrance Day every year. The day of commemoration of the Kokoda Campaign is a case in point – PNG’s commemoration takes place on 23 July, the date on which the Papuan Infantry Battalion (PIB) and its native soldiers first engaged the Japanese on PNG soil. In PNG’s version of the events of that Thursday in 1942, prominence is given to the late Ben Moide and other native members of the PIB who drew first blood at Awala against the Japanese. Australian records do not deny this, but in the written Australian histories this fact is not always acknowledged. 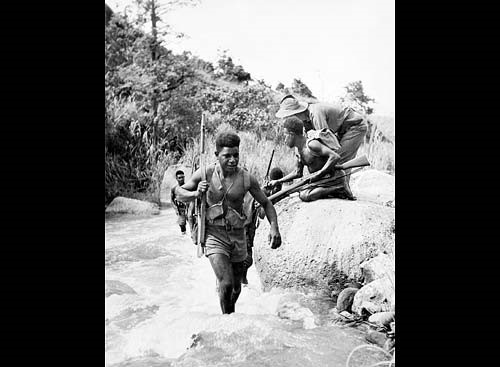 Development of the Papua New Guinean narrative and version of history will attract greater numbers of people both externally and internally. At the time of WWII, Papua was an Australian Territory and New Guinea was a Mandated Trust Territory administered by Australia. The Papua New Guinean history and version of the events of the war in New Guinea will no doubt fill a gap in the larger Australian narratives of the contributions of First Nations peoples to Australia’s war efforts. In line with the Reconciliation Action Plan, the AWM has already began this process of commemorating First Nations peoples through its “For Country, For Nation” touring exhibition. A number of Papua New Guineans also feature in this exhibition and the contributions of native Papuans and New Guineans, in support of Australia, are acknowledged. 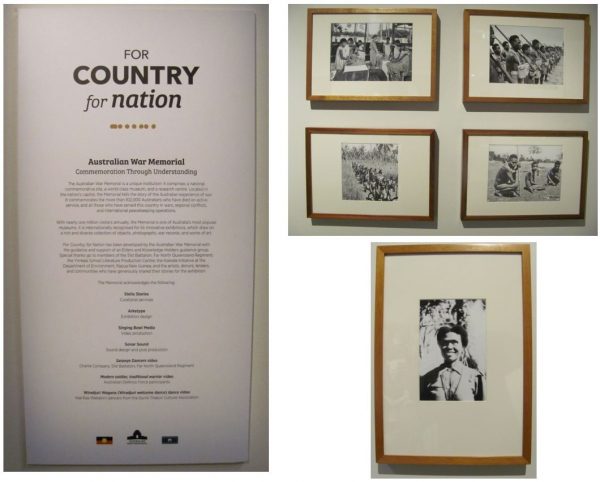 Gregory Bablis is Principal Curator of the Modern History Department, PNG National Museum & Art Gallery. He is currently studying for a Masters in Asia-Pacific Studies at The Australian National University and is also undertaking an internship at the Australian War Memorial. The ideas in this article do not necessarily reflect those of the institutions he is associated with.

[1] The Tok Pisin translation of the same Bible verses reads: