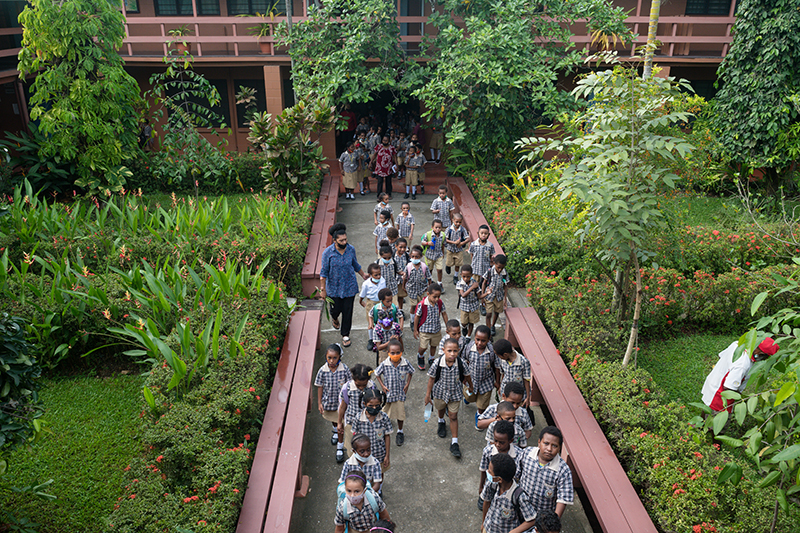 Papua New Guinea has been facing fiscal problems since the end of its economic boom almost a decade ago, with large deficits, increasing debt, falling revenue, and a rapidly growing salary bill. The COVID-19 pandemic has made things worse by depressing revenue. But the recently released 2021 Final Budget Outcome contains some promising signs.

First, interest payments and the salary bill, both of which have increased rapidly since the boom ended in 2013, have been brought under control, at least for now. As the graph below shows, they have both started to fall relative to GDP. 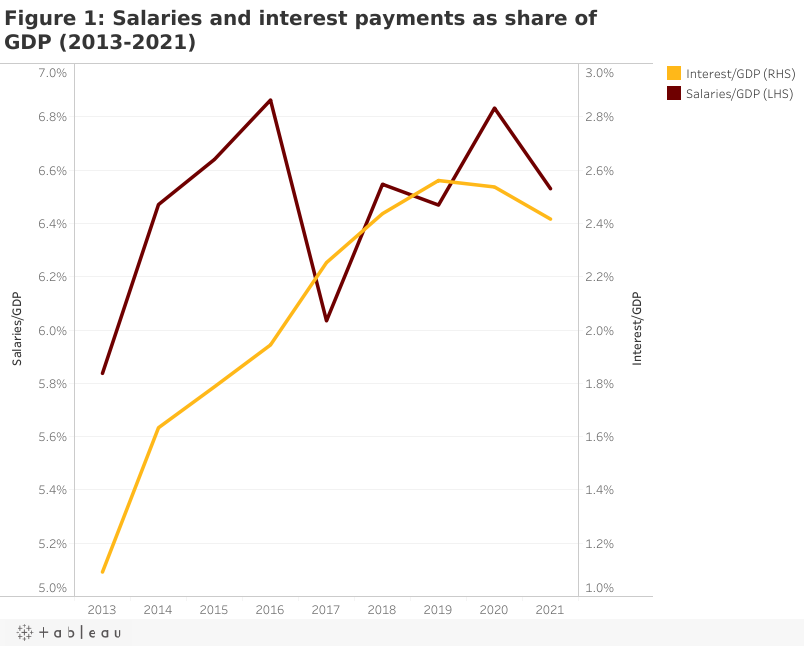 Second, after two years of negative growth, revenue grew strongly, by 9.7% after inflation, or from 14.2% of GDP in 2020 to 14.9% in 2021. This is more than the target in the government’s ambitious plan to achieve a balanced budget in 2027, which requires 7% annual revenue growth.

The revenue increase in 2021 was largely driven by mining and petroleum taxes, reflecting higher commodity prices. Grants (foreign aid) also increased by 47%, indicating strong support from foreign governments and multilaterals during COVID-19, including the first budget support grant after two decades from Australia.

However, despite these promising indications, PNG is far from achieving a fiscal recovery. The basic budget problem that PNG faces is a structural gap between expenditure and revenue. As the next graph shows, expenditure now hovers above 20% of GDP, and revenue around 15% of GDP. 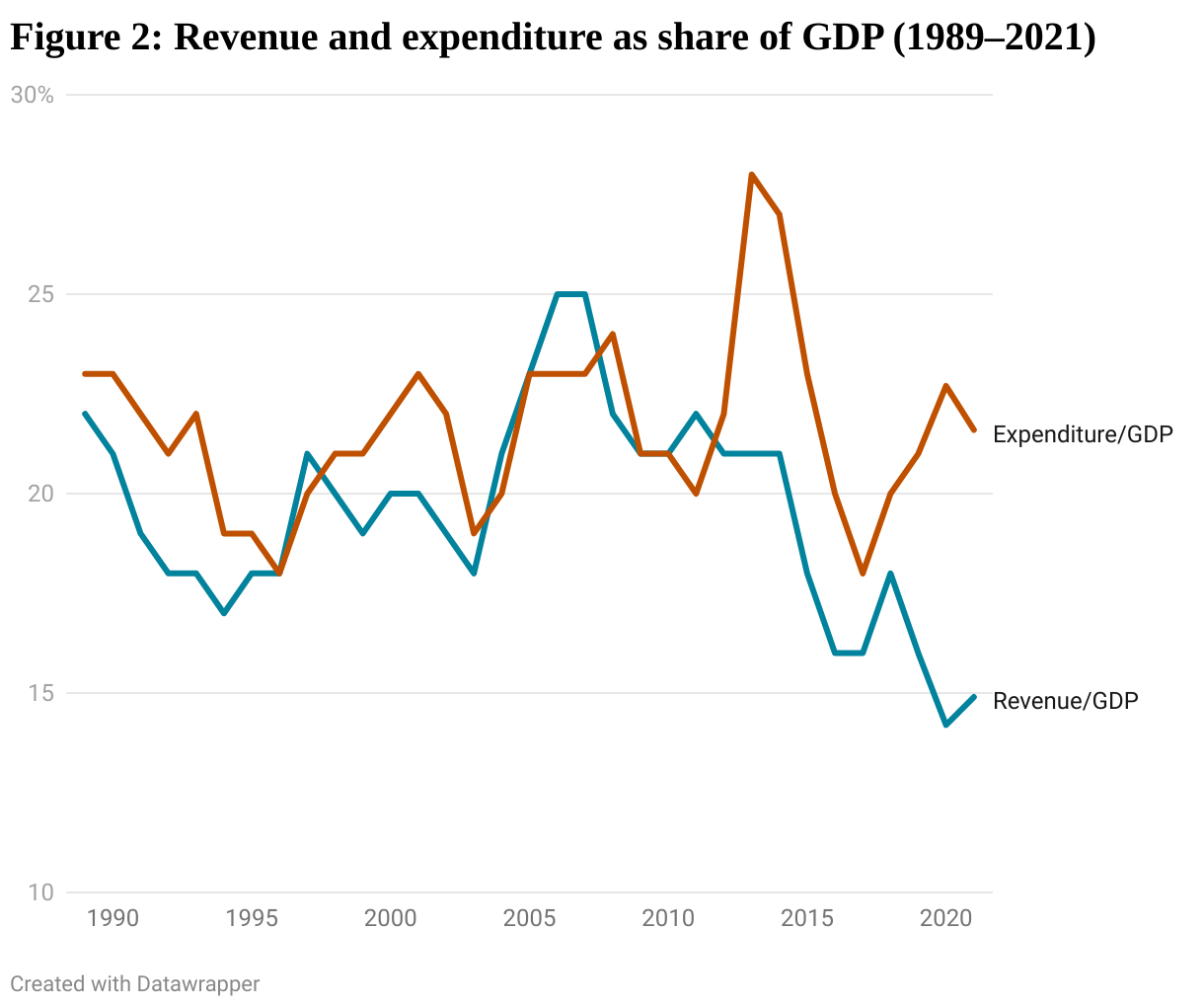 This is not only an issue for debt sustainability, but also for service delivery. PNG has a rapidly growing population. It is useful to divide revenue and expenditure by the population, as the next graph does. Adjusting for inflation, expenditure per capita in 2021 was around its long-term average of K2,200 (in 2021 prices). But revenue per capita was about K1,500, around its lowest level for three decades. With falling revenue per capita, it will not be possible to support expanded education, health and roads spending. 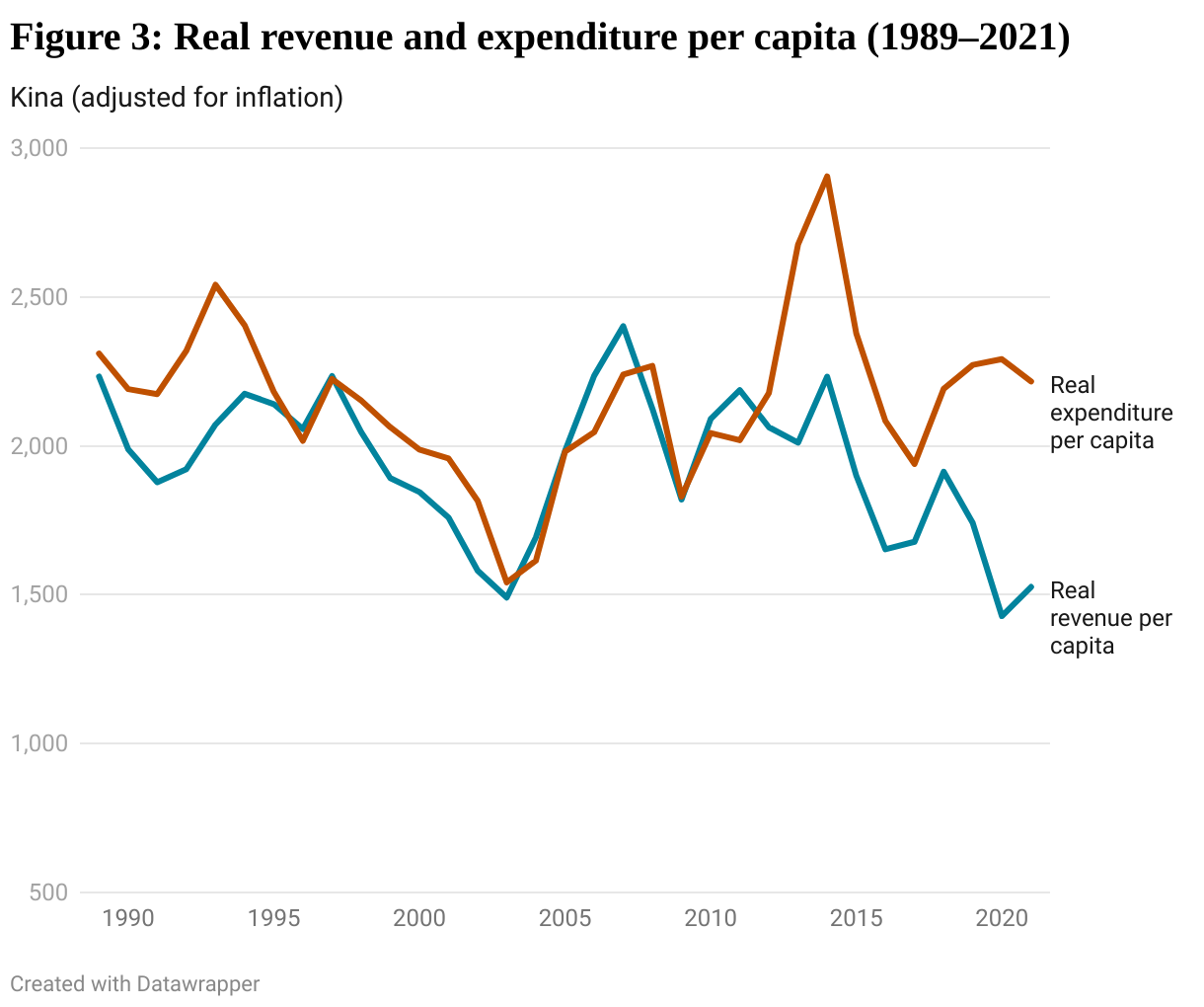 While recovery from the COVID-19 downturn will take time, reforms are also needed. The worst revenue performer is dividends from state-owned enterprises (SOEs). Outside of mining and petroleum, the SOEs paid no dividends at all for the 2021 fiscal year. This is not a new issue. The 2019 and 2020 fiscal years also saw zero dividends coming from SOEs.

With their poor performance and estimated consolidated debt of 5.1 billion kina, it is perhaps unrealistic to expect much more from the non-resource SOEs. But Ok Tedi Mining Limited (OTML) only contributed K81 million to the budget, down from K370 million the previous year. A note in the budget indicates that most of OTML dividends went to Kumul Minerals Limited rather than the budget, another case of questionable diversion of funds.

The National Fishery Authority also paid nothing to the budget against a target of K146 million, despite being flush with funds from the auctioning of fishing licences.

On the expenditure side, while, as mentioned earlier, the salary bill was under control relative to earlier years, expenditure on salaries still went over budget by K180 million. The salary bill for MPs’ salaries increased by K8 million from K71 million to K79 million. There was a spike in the unclassified or ‘other’ portion of the salary bill, which increased from K16 million in 2020 to K73 million in 2021, raising questions of transparency and accountability.

In conclusion, the final budget outcome for the 2021 fiscal year shows strong growth performance in revenue collection and constraint over spending with lower deficits compared to 2020 outcomes. Despite these promising signs, it’s too early to say PNG has turned the fiscal corner. The large structural gap between revenue and expenditure existed before COVID-19, and closing it will not be easy.

The PNG Budget Database has been updated to reflect the 2021 Final Budget Outcome figures.