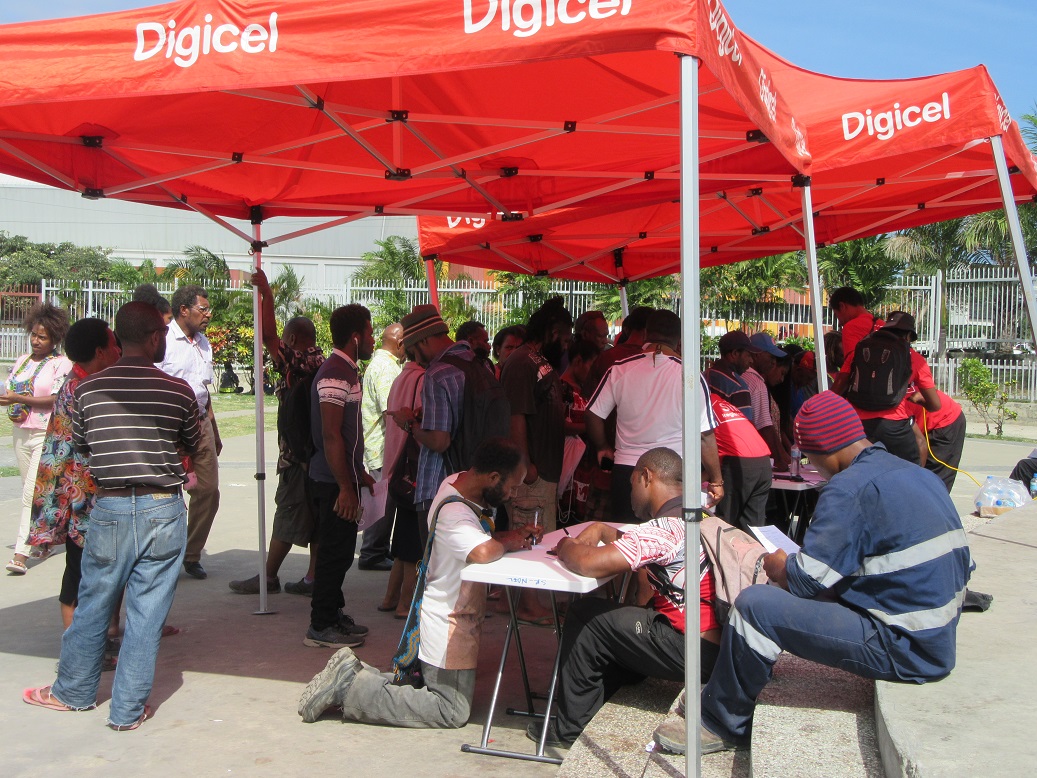 The country is now to be divided into three kinds of geographies, which will be handled differently. Unregistered SIM cards in urban areas (cities and provincial capitals) will be deactivated. Users in those places will have 30 days to reclaim their phone numbers. Mobile phone users in district towns will have until December 31 to register their SIM cards, while consumers in rural areas will have until April 30 next year.

President of Karkar Local Level Government in Madang Province, Mr Ben Naing, says that a team from Digicel has visited Karkar Island on two occasions to register mobile phone users. The team visited several key locations on the island, such as Kinim Station. Ward councillors, village recorders and other village leaders actively encouraged people to register their SIM cards. Earlier research in Mr Naing’s village shortly after mobile network coverage reached the island found that villagers viewed mobile service as potentially life-saving during medical emergencies such as childbirth complications. Mr Naing is confident that many people on the island have been able to register their SIM cards, although he fears that those in more remote parts of Madang Province may not have been able to.

A similar story has been described by Mr Emil Yambel, President of the Basamuk Sports Association, and an employee in the Information Technology section of the Ramu Nickel mine. Mr Yambel says that a Digicel team travelled to Basamuk, with transportation and accommodation provided by the company. He said that the mine’s employees and some villagers registered their SIM cards. However, he is concerned that people who live in the surrounding mountain villages are unlikely to have registered their SIM cards.

PNG is not the only country to have legislated for compulsory SIM card registration and then granted multiple extensions of deadlines. For instance, a similar process has been conducted in Uganda, and this year it has involved the writing of new guidelines, criticisms of strict measures, and then an easing of those measures. Early this year, the regulator in Uganda banned informal sellers from selling airtime (mobile phone credit) in an effort to enhance cybersecurity. Such informal activities are common in PNG and are important income-earners for vendors and key elements in social security networks for many people.

Numerous countries in Africa have introduced compulsory SIM card registration. According to Dr Alison Gillwald, Executive Director at Research ICT Africa, this process has been “counterproductive”, locking poor people out of mobile phone ownership and apparently having minimal impact on terrorism and crime. Dr Gillwald has argued that “despite little evidence that mandatory SIM registration contributes to safeguarding our digital security or physical safety, it has become a universal regulatory standard in Africa to facilitate the monitoring and interception of communications”. If, as Dr Gillwald asserts, enforcement of SIM card registration has had negative effects, especially regarding poor people’s access to mobile phones on the African continent, then it is difficult to understand how the results in PNG will be any different.

Madang MP Bryan Kramer filed proceedings in court yesterday, attempting to secure a stay order to prevent deactivation of SIM cards, but this was denied.