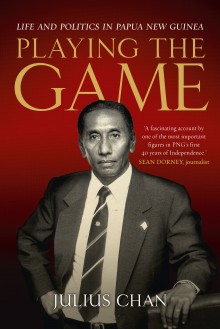 A review of Playing the Game: Life and Politics in Papua New Guinea.

The Rt Hon Sir Julius Chan MP was PNG’s Prime Minister between 1980-82 and 1994-97. He is the first PNG politician to have written a memoir since Michael Somare’s Sana, published in 1975.

After giving us his family and village childhood memories of the colonial era and those of his enjoyable secondary schooling in Australia, Chan’s book changes gear. This is the first book covering politics from his first election in 1968 to his current position as Governor of New Ireland province. It is very much his story, not claiming objectivity or comprehensiveness. Chan thanks his ‘writer and editor’, journalist Lucy Palmer, and the book reads easily, rather like the spoken word. This book joins the current project of writing personal histories as a part of nation building, and is in fact the only book covering PNG’s last 48 years.

The narrative moves through Chan’s political and business careers, and will fascinate PNG’s political community for its vividly scathing comments on many political figures, including Chan’s own ministers. It also carries valuable lessons for Australian governments.

Chan presents himself as an innocent who became the first Finance Minister in 1972 and had to learn economic management and governance. He takes personal credit for creating the central bank and PNG’s currency, which had been planned for a decade. He determinedly argues his early theme that landowners should own the resources on their land, including forests, which many critics believe has led to their widespread destruction by unscrupulous members of the elite and foreign companies. He condemns the environmental damage from mining and from logging (p. 224-225). The concluding reflections in the last few chapters reiterate the argument that resources and their income should belong to landowners, but he also wants national, provincial and local governments to get revenues to pay for services and infrastructure. Are both paths possible?

Chan’s second political career from 2007 as a provincial governor shows his changed awareness of the need for essential services. The provincial ‘reforms’ that his government rammed through in 1995 are not discussed in detail, though his recent comments in the media condemn Port Moresby’s ongoing neglect of the provinces. He wants far more revenue from mining projects, and for provinces generally. He mentions the massive funds allocated via district MPs, which are rarely used effectively, but does not link them to the limited allocations to provinces. (Incidentally, Prime Minister Peter O’Neill does not get a mention.) Chan supports increased autonomy for provinces, but suggests that if Bougainville breaks away, the other island provinces could secede, a move he would support.

Chan is uncertain about PNG’s future. He regrets the loss of the idealism of PNG’s early governments, and wants improved education. At the book launch, he spoke of improving human capital, but nowhere does the book specifically mention PNG’s run-down universities. He is clearly worried about ethnic issues and regionalism, and is alarmed by the movement of dynamic (and ‘aggressive’) Highlanders to urban areas. He dates the rise of pervasive money politics and greed from the rise of his successor in 1997, the late Sir William Skate, as if PNG had no problems before then:

‘Corruption has become so widespread now and it breeds at the highest level where the Big Men in government make a deal… It flows from the top right down.’ (p. 201)

The political climax of Chan’s story is the Bougainville secession crisis and civil war from 1989, which he was determined to bring to an end (or at least to a peace negotiation) before the July 1997 election. Despite years of military stalemate between secessionists and PNG security forces, Chan continues to argue that the Sandline private military contractors he hired would have brought peace. He believes that they could have used ‘psychological warfare’ and ‘a massive release of information to tell the people to get out’ and then ‘firepower to show how powerful Papua New Guinea was by just annihilating a village up there at Panguna, such as Guava, which is where [the secessionist leader Francis] Ona was presumed to be.’ He thought this would work out like the nuclear bombs on Hiroshima and Nagasaki.

‘The long term strategy, once that show of power had been made, was to restore peace. I felt this action would be enough to convince the hard-core fighters that the game was over.’ (p. 177)

In this exercise, Chan thought the African ‘black soldiers’ of Sandline’s subcontractor Executive Outcomes would be acceptable in a way that white mercenaries would not be.

General Jerry Singirok, who initiated the Defence Force moves to expel Sandline, argued on national radio that the contract was corrupt, and that foreigners would be attacking Papua New Guineans. (Singirok’s own dealings with a British arms trader were not known until several months later.)

Chan blames the media for the public outrage in Port Moresby, and appears to have no understanding of the civil society protests led by student groups, Melanesian Solidarity radicals and church congregations. These demonstrations focused on Parliament House, and along with military intimidation, no doubt influenced Chan’s eventual decision to sack Defence Minister Mathias Ijape and Finance Minister Chris Haiveta, and to step aside himself during the first of two Commissions of Inquiry. He skates over the latter, but reports that his lawyer had told him there was ‘nothing that implicated me’ but ‘there could be some dark patches’ (a beautiful euphemism at p. 196). Apart from Singirok, he says there was ‘no proof’.

Once the Sandline plan broke after a leak from London via Honiara, the Australian government of John Howard was immediately concerned about foreign troops destabilizing not just PNG but the South Pacific, and damaging PNG’s democracy. Howard and Foreign Minister Alexander Downer sought to persuade Chan to drop the Sandline scheme, and along with several senior bureaucrats strongly hinted that Australia would reconsider its still considerable foreign aid to PNG. Michael Wesley and Allan Gingell have argued that this Australian pressure caused Chan’s change of mind. Chan’s book (like the one by Sandline chief Lt-Colonel Tim Spicer) makes it explicit that he ignored the threat, and that Australia lacked influence despite having troops prepared to act at the time. Chan describes Howard as ‘bureaucratic’, and ‘still operating in the paternalistic vein of the former colonial power’.

That may be so, but I would also argue that domestic pressures ended the Sandline misadventure. In arguing again for the Sandline scheme, Chan shows a limited understanding of the dynamics of Port Moresby street politics in the March 1997 crisis.

Chan returned to office in June 1997, but clearly Sandline was a traumatic and humiliating event for him. He does not mention the significant go-between roles played by lawyers such as Dame Meg Taylor, former Speaker Sir Barry Holloway, the Speaker Sir Rabbie Namaliu and others in finding a constitutional safety valve, easing the tension in Port Moresby and preserving democracy. Chan now alleges that ‘[a]ll these goody-goody people got together and tried to prolong the whole affair’ (p. 197).

There are recurrent examples in Chan’s book of what can be called post-colonial resentment among PNG leaders of what they see as meddling by their wealthy and relatively powerful neighbour. Chan is now in his eighth decade and speaks bluntly. While naming Australian friends he liked working with, he rejects what he repeatedly implies is racism by Australians. He obviously rejects the Australian assumptions that foreign aid ‘investments’ designed to serve Australia’s national interest should create gratitude and compliance. He wants far more revenue to come from mining projects, and resents PNG’s need for aid. He does not develop this argument, though he repeats his cry from the mid-1990s, that ‘beggars cannot be choosers’ (p.186). Yet PNG governments do choose. Australians can learn a lot from this book.

Bill Standish is a Canberra-based researcher who has observed PNG politics since 1966.

Playing the Game: Life and Politics in Papua New Guinea (2016) is published by University of Queensland Press.

Note: This is a corrected version of a post first published on March 18. That post incorrectly stated that Sir Julius in his book condemns the environmental damage from mining, but not that from logging.