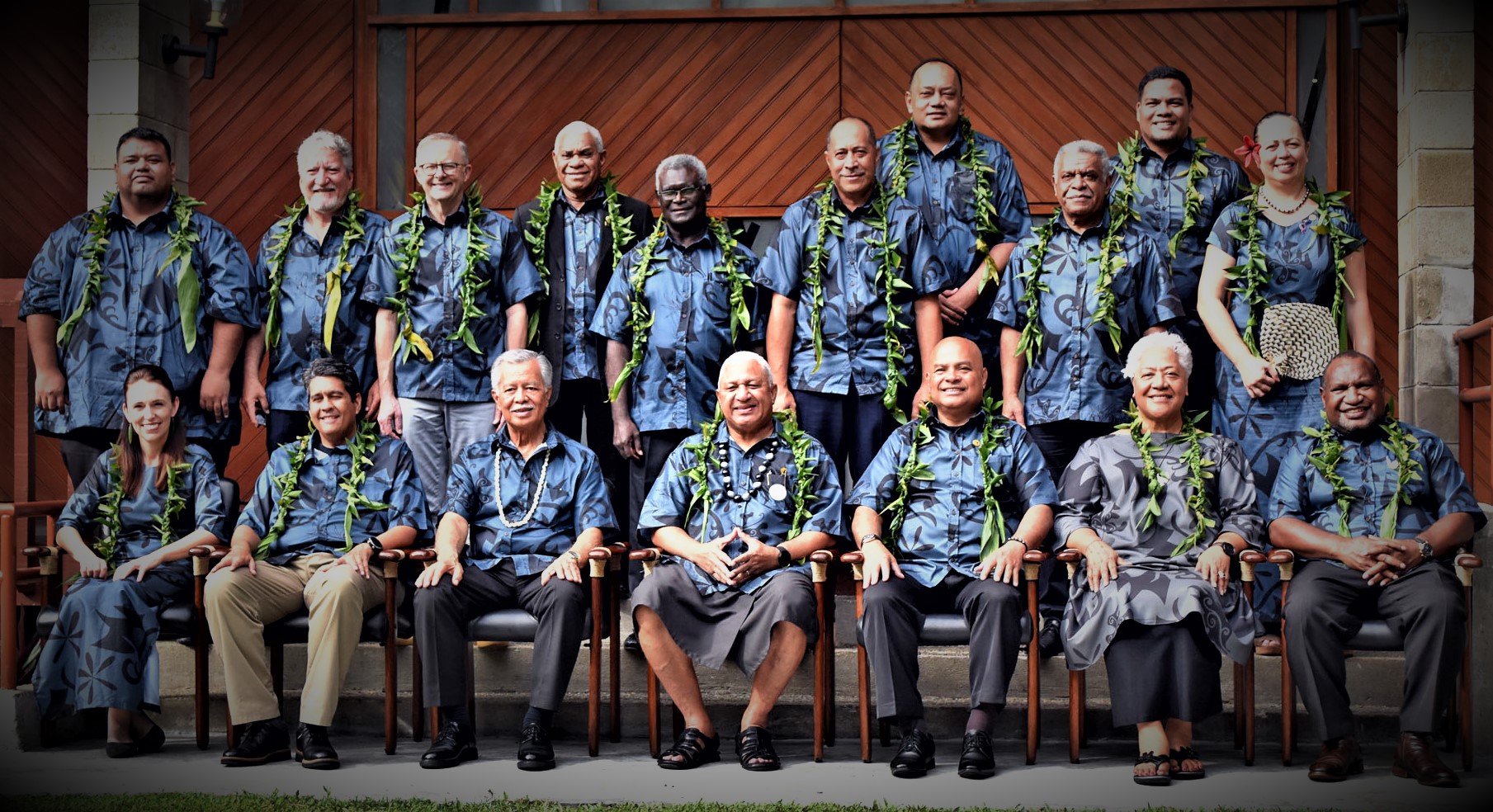 Last week’s meeting of the leaders of the Pacific Islands Forum (PIF) was keenly anticipated and came at a critical juncture for the region.

It was the first in-person meeting since Tuvalu in 2019. Since then, a lot has happened. The impacts of COVID-19 have disrupted Pacific economies and strained fragile health systems. Increasing geostrategic competition has brought enormous amounts of scrutiny to the region. And the potential split in the PIF that was triggered in February of last year, is a wound that just cannot quite heal.

Fiji markets itself internationally as “where happiness finds you”. PIF is headquartered in Fiji, and this was the first time since 2006, just months before now prime minister Frank Bainimarama’s coup, that the country has welcomed the Pacific leaders for a full meeting. In the interim, Fiji was suspended (2009) and reinstated (2014) and Bainimarama had declined to attend leaders’ meetings until 2019 – so this regional summit carried symbolism for the hosts in an election year.

The focus of this meeting was to launch the 2050 Strategy for the Blue Pacific Continent. This is an important achievement for the PIF, but in terms of external analysis it will likely be overshadowed by geopolitical concerns.

There were several new faces in the family photo, including Australia’s new Prime Minister, Anthony Albanese. A surprise attendee was Papua New Guinean incumbent PM James Marape, on a lightning visit during the turbulent voting period of PNG’s general election. He handed over the chairing of the Melanesian Spearhead Group on the sidelines to PM Bob Loughman of Vanuatu.

The most notable non-arrival was President Taneti Maamau of Kiribati, who announced on the eve of the meeting that his country was withdrawing from the grouping. The Republic of the Marshall Islands was absent because their administrative withdrawal was already in process, despite President David Kabua wanting to remain. Nauru’s President Lionel Aingimea stayed away as his country is in the midst of a COVID-19 pandemic wave, while Cook Islands PM Mark Brown couldn’t take part because of campaigning for national elections in two weeks.

Not invited to PIF this time were the 21 dialogue partners, countries with significant political or economic interest from outside the region. This was so leaders could focus on key issues without external factors. Both the US and China, who became dialogue partners in 1989 and 1990 respectively, were not required. But on 13 July, US Vice President Kamala Harris addressed Forum leaders virtually.

Although the leaders’ retreat finished at 4pm as scheduled, the final communiqué was slow to emerge from the Secretariat.

The communiqué confirms the leaders’ endorsement of the 2050 Strategy for a Blue Pacific Continent – hailed as the region’s ‘North Star’ for the future. The Strategy is the culmination of several years’ work and many consultations. So far, the response has been muted. Until there is an implementation plan and some way of measuring its impacts it is hard to see how it can move beyond words on a page. Leaders have tasked officials to undertake that work between now and next year’s meeting.

Leaders have also endorsed Vanuatu’s push to seek a UN resolution to request an advisory opinion from the International Court of Justice on the human rights implications of climate change. This was a huge win for the Vanuatu delegation, who had put lots of energy into pressing their case. However, this meant there was no energy left to follow up a 2019 resolution calling for a visit to West Papua by the UN Commissioner for Human Rights.

With the Forum Chair, PM Bainimarama, finally having spoken with President Maamau of Kiribati, the leaders endorsed the Suva Agreement, which provides for significant changes to how the Secretary-General is appointed and how chairing is to be shared among the three sub-regions of Melanesia, Micronesia and Polynesia. The connection with Maamau opens the door for further work, including through the appointment of a special envoy, to keep channels of communication open and working towards Kiribati rejoining. However, that is not likely to occur in the immediate term.

After years of Forum leaders’ meetings being poorly attended by non-regional media, this Forum had a strong Pacific media contingent, many Australians and New Zealanders, as well as global players such as the BBC, CNN and Al Jazeera. Not even Fiji’s return to democracy in 2014 saw such a media focus on Suva. Forum meetings aren’t always easy to cover, like the last face-to-face one in tiny and remote Tuvalu (with limited space and resources) or before that in Nauru (where journalists were denied entry), but it helps if not just the leaders show up but also the fourth estate. Climate change is the big issue for the region, but it is the other “c” word that pulled the global gaze: China. And with the eyes of the world on the hotbed of diplomatic intrigue of Suva, the Pacific media used the occasion to highlight the repression and censorship they face.

There is no doubt that the outgoing Forum Chair, the Forum Secretariat, and others will consider this meeting a success. Whilst that is true to an extent, there are plenty of challenges ahead. A deepening fault line among the PIF membership is around deep sea mining, and it is likely to become more apparent between now and when leaders next convene in Cook Islands.

Prime Minister Albanese appeared relaxed and at ease among his Pacific colleagues. The shift in tone from the new Australian government has been welcomed by the regional leadership – so it was disappointing that he told journalists that this Forum meeting has seen Australia increase its influence and that this can be expected to have “an impact”, implying that it will (hopefully) reduce China’s. The PIF meeting was about forging and sustaining key relationships among its members, and seeking ways to address shared challenges and achieve shared aspirations, not geopolitical game playing.

Stefan Armbruster
Stefan Armbruster is an award-winning journalist based in Brisbane. He first worked in Fiji in 1994 before moving to CNBC, Dow Jones and the BBC in London. He is currently a correspondent with SBS regularly reporting from and on the Pacific. He also trains and mentors journalists in the Pacific region.