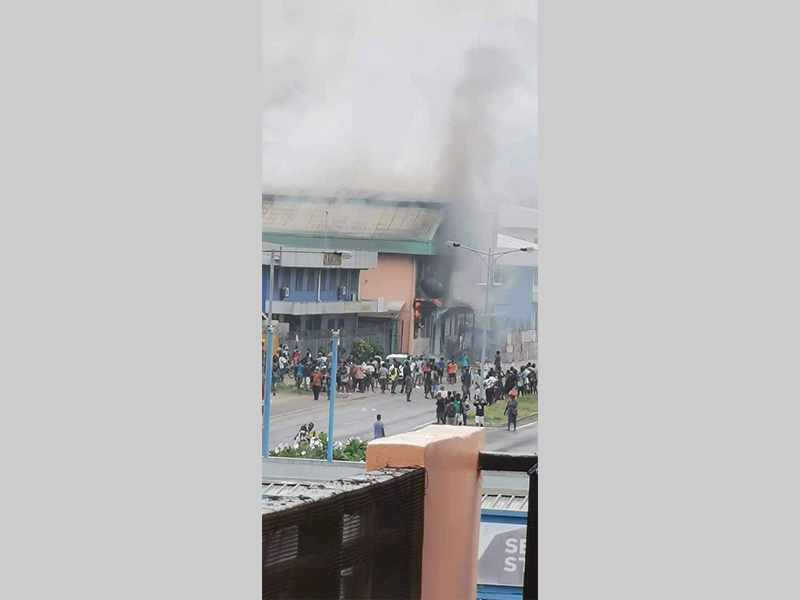 The riots in Honiara yesterday, disturbing the city’s normally quiet atmosphere, were unexpected but not surprising. Someone made reference to a possible protest that would coincide with the convening of parliament, but details were sketchy and social media was tightlipped about a protest for a change. Arguably, the riots are a culmination of a number of flashpoints that have been ignored these past few months.

At a “Tok Stori” Conference jointly held by the Solomon Islands National University and University of Melbourne on Wednesday 17 November, on the environment, conflict and peace, I spoke about unmasking the faces of those who control the Solomon Islands economy. I argued that even though 80% of land in Solomon Islands is owned by Solomon Islanders, they are largely bystanders, while outsiders, mainly Malaysian, Filipino, and Chinese loggers and mining companies control the resources and the political processes involving our politicians. People might elect our members of parliament, but it is the logging companies, mining companies and other largely Asian-owned companies that underwrite the formation of government, influence the election of the Prime Minister, and keep ministers and government supporters under control after the elections. In return, if they want anything, or need special favours, they go directly to ministers and even the Prime Minister.

Yesterday’s protest is said to have been instigated by supporters from Malaita, but the frustration with the national government, the attitude of the Prime Minister and ministers to provincial governments and provincial politicians, and the sense of alienation and disenfranchisement, is arguably shared across a wide spectrum of the country. People feel resentful when they see the national government giving a Malaysian company preferential tax status by virtue of an Act of Parliament, or $13 million as a deposit towards the construction of what are purportedly poor-quality prefabricated houses, while Solomon Islanders have to sleep on the floor in the emergency department of their hospital. Such things are inevitably bound to fuel resentment. When people see the government bypass local, indigenous contractors for the Pacific Games, it makes them antagonistic, and feel neglected. This sense of alienation, disempowerment and neglect has been building for some time.

Yesterday’s protest is intertwined with the complexity of the China-Taiwan, and national-provincial government political dynamics that have been well publicised. Malaitans in Malaita generally have been sympathetic to their Premier. The shoddy way the national government has been treating their highly respected Premier Daniel Suidani, starting with arrangements for his overseas travel, and then blocking every single attempt he made at appointing ministers while he was away, has not been lost on Malaitans. The unprecedented welcome he received at Auki when he returned from medical leave was testament to the high regard in which he is held. Not even the Prime Minister would have come anywhere near size of the crowd that welcomed him that day. Notably absent were the Malaitan members of the national parliament.

The thousands of supporters who showed up in truckloads from all wards in Malaita to stop the vote of no-confidence against Daniel Suidani should have sent a signal to national parliamentarians and the Prime Minister that it was time to set aside their differences. Perhaps they underestimated the people’s resolve, thinking that the bribes that were allegedly paid to the Malaita provincial members would have been sufficient to topple Daniel Suidani. Where the money originated from remains a mystery. However, Daniel Suidani’s vocal opposition to the switch to China, and his courting of Taiwan, might give a clue.

Throughout the past months, there has been little dialogue between the national government and the Malaita provincial government. A great opportunity to avoid today’s protests would have been for government ministers from Malaita to attend a reconciliation ceremony that was held in Aimela, a village outside Auki, last week. They were not seen. Diplomacy and dialogue are not confined to international relations. They are very important attributes for politicians to have when they deal with each other.

Solomon Islands has been drifting to self-destruction. It is one of the most aid dependent countries in the world. Significant donor support is given to its health and education sector. Yet, its ministers and senior government officials treat its people poorly, and allow them to be exploited by loggers and miners.

Yesterday’s protest and riots are evidence of serious underlying currents that have been neglected. There has to be reform to the political system, including making the government more inclusive. Those that rioted today probably don’t get anything from government. This has to change, otherwise Solomon Islands could be on the pathway to implosion.