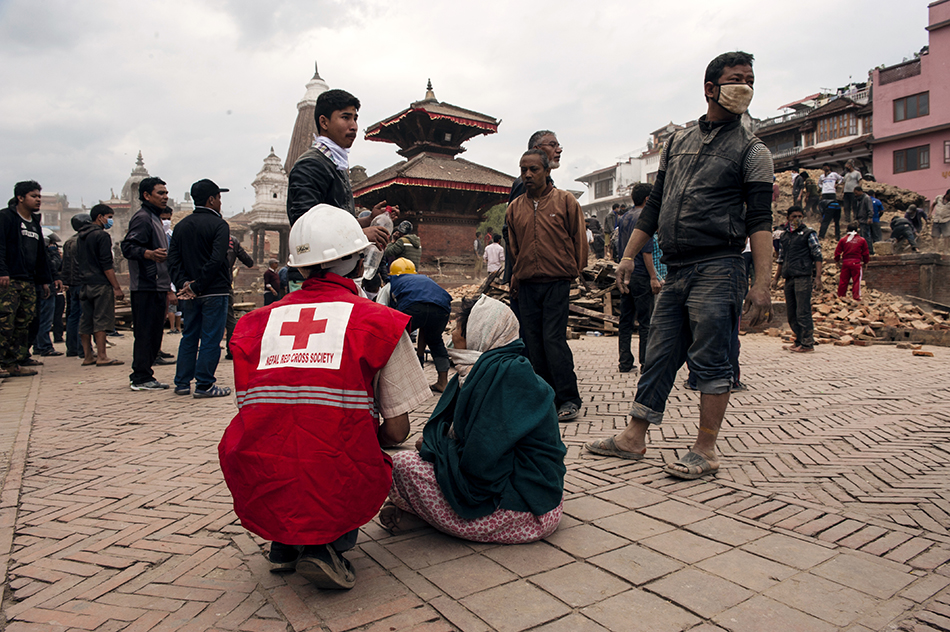 Each year, the World Disasters Report – produced by the International Federation of Red Cross and Red Crescent Societies – provides independent thinking and evidence on global disaster management. This year’s report, Focus on local actors, the key to humanitarian effectiveness, provides timely evidence of how local actors greatly influence the effectiveness of any operation, usually more than their international partners.

A central finding of the report is that aid is most effective with strong local actors. They are the first to respond, saving most lives in disasters. Despite the critical role of local agencies, they are often grossly under-funded and inadequately engaged by international organisations.

Who are these local actors? They are volunteers, non-government organisations, businesses, religious groups, and government authorities. They are on the frontline. This year, it has been local people and organisations rescuing thousands trapped in the rubble, saving far more lives after earthquakes in Nepal than complementary international response teams. It is local people evacuating their friends and neighbours to safety when a massive cyclone swept through Vanuatu.

The effectiveness of local actors goes above and beyond being first on the ground when disasters strike. Local groups, including Red Cross and Red Crescent societies, have the trust of their communities and local knowledge. Importantly they have a deep understanding of language, cultural norms and the networks to be most effective. They are permanently present in communities, making them best placed to identify and mitigate risks before disasters strike, and to act quickly in a crisis.

Roundtable research demonstrates that targeted resilience investments of $250 million per annum have the potential to generate budget savings of $12.2 billion and reduce natural disaster costs by more than 50 per cent by 2050. Nowhere is such investment more important than in the Asia-Pacific region, which sees half of all disasters most years.

Over the past few years, there has been growing emphasis on being more effective while ‘localising’ aid. In the last 10 years we have quite rightly seen a significant shift towards supporting relief and recovery efforts led by local communities and organisations. Despite this, the aid and investment is still skewed towards international response rather than supporting local resilience.

Without a doubt, the international community has a critical role to play in large-scale crises. It is our responsibility to reinforce and provide surge support as required. We certainly must not wash our hands and seek to transfer all responsibility to local actors.

But, let’s be honest, aid is a global AUD$27.8 billion industry. Could we get better outcomes for the money spent? Could we save more lives? Could we have a faster response? There is a growing body of evidence which says, “Yes, we can”.

Two years ago, one of the largest global donors, USAID, committed to a major reform, setting an ambitious goal of giving 30 per cent of its aid by 2015 directly to local entities, public and private – nearly tripling levels from 2011. While commendable, the target is looking a little unlikely, but it is a step in the right direction.

Fortunately, many international agencies are now following suit and are looking at a different distribution of funding to local actors. It is not just about ensuring that local agencies have the resources needed to respond to disasters and prioritise resilience. It is about genuine commitment to building on the strengths of local organisations.

In disasters, there has long been a focus on providing training and technical expertise. But we also need to tackle the challenges faced by local actors in terms of resources – both human and relief supply logistics – and importantly effective financial management. This needs to be a genuine partnership with mutual accountability.

This year’s report urges all disaster risk reduction and crisis response actors to improve how the international humanitarian system is organised. This extends to implementing policies that improve the capacity of local agencies to address risks and prepare for hazards, including contingency planning, digital communications and, importantly, disaster law.

The need for better disaster law and agreements is clear. Without it, local efforts can be seriously undermined in disasters, costing lives and holding up aid to communities desperately in need. Just this year, following one of the most devastating earthquakes ever in Nepal, national authorities were held up investigating a shipment of ‘beef masala’ as part of relief food packages. Cows are considered sacred for many in Nepal, and time and money was wasted on ineffective and inappropriate aid. Similarly, after a cyclone last year, a shipment of bathtubs was sent to Tonga as relief supplies. Samoan officials were held up by containers of high-heeled shoes! These shipments, undoubtedly well intentioned, still caused chaos when countries are struggling to get aid into their small ports following major disasters.

We must continue to work with our local partners in the region to boost legal frameworks and agreements that clearly outline the aid that is needed in countries after disasters. Disaster response could be vastly improved if the right teams arrive with appropriate visas and expertise, if customs clearances are streamlined, if roles and responsibilities are clear, if local leaders are appropriately supported. Unfortunately this is often not the case.

Australia is supporting and should continue to support governments in our region to have effective disaster laws and agreements in place to clearly define roles and responsibilities in a disaster. We need to ensure that the role of national authorities is well respected and that relief supplies can get to where they are needed in the shortest possible time.

The 2015 World Disasters Report confirms that we urgently need sound investment in strong local actors, and streamlined international assistance when required. It’s critical that we spend the time and resources to get the balance right. It will be well worth the investment in the long run.

You can read more and download the 2015 World Disasters Report from the Australian Red Cross website here.

Peter Walton
Peter Walton is CEO of CARE Australia. He was previously Head of International Programs for the Australian Red Cross.