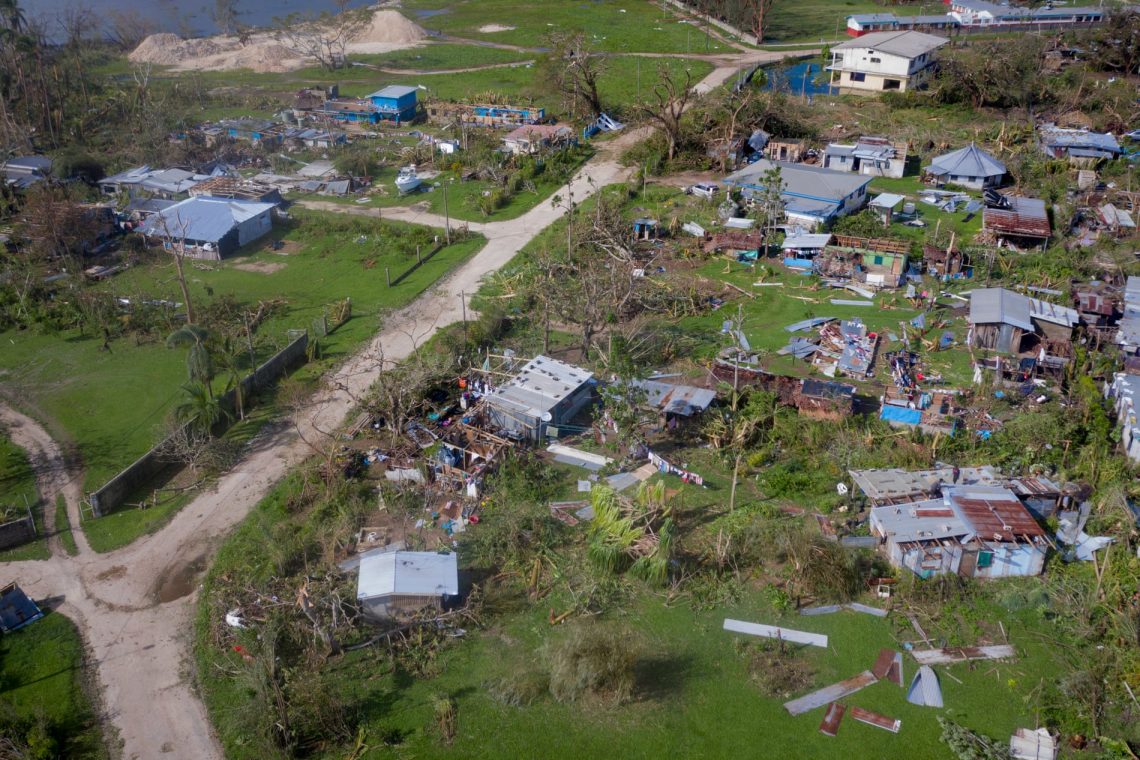 In late April, Good Will Hunters’ Rachel Mason Nunn sat down with Dan McGarry to talk about Tropical Cyclone Harold, COVID-19 and the recent change of leadership in Vanuatu. Here is an excerpt of their discussion.

Dan: I think we’re actually further than a week behind now. I think we’re losing ground on a daily basis, and I’m extremely concerned.

Now, look, I have to preface all of this by saying that I have a personal stake in this. My family, my wife’s family, is directly impacted by this. I have one young nephew who was badly injured while he was clearing brush. My father-in-law is in very serious condition with chronic heart disease and hasn’t been treated yet. The village in which they live has not received a single bit of aid, either shelter or food, even though they’re only five kilometres away from the local distribution centre.

So, I need to make it very clear that I am biased in all of this. That said, I have had the opportunity to do a fly over of a significant amount of the area. We did get on the ground, and I spoke to people, including the Mayor of Luganville and other people who were at the coal face, as it were, in the disaster response.

And I’m deeply concerned by it, by what I’m seeing. There’s a great deal of national pride being invested in this locally-run disaster response, but it ignores some huge gaps in our capability that, quite recently, I mean in fairness to the people who are doing the response, could never have been filled locally.

For example, we only have one helicopter pilot operating commercially here in Vanuatu, so we can’t run a fleet of aircraft moving into some of the more remote areas, providing emergency medical teams and emergency response in a timely fashion.

We don’t have huge stocks of tarpaulins and various other things that are needed for short-term shelter. We don’t have huge stocks of food standing by and ready in order to replace the losses from people in their gardens. Even though we’re doing our very best to provide something that’s appropriate, nutritious, and timely, it’s not working, and that’s a really big concern.

As I said, my own family’s village, they’re five kilometres away from the distribution point and they have yet to receive a single bit of formal aid. We were the ones who sent the very first gifts of food off, and that was just to help the family.

So, yes, I’ve got significant concerns about the capacity of the Government of Vanuatu in the National Disaster Management Office to actually achieve this kind of aspirational goal of having a locally run disaster response.

Rachel: Is it largely due to the absence of international actors that the local response has been inadequate?

Dan: We do need international actors—but these resources are available to us. This is the thing that I find galling: because of the timing of this disaster, the fact that the COVID-19 crisis came right at the time of the general election, and now, Cyclone Harold has happened, [it] has coincided almost perfectly with the election of a new Prime Minister and Parliament.

The entire political leadership of the country has basically spent its time serving its own purposes rather than the national needs, and you know, regardless of the necessity of it, and the fact that, constitutionally, we’re required to do these things, it has taken our eye off the ball, and it’s left people in charge of a double disaster, nationally, and of an unprecedented shape, then with no leadership.

And therefore, they’re trying to fill the void, but oftentimes, they’re doing it in ways that are inappropriate, and the international ties, these are things that are normally organised at the highest level, usually at the ministerial level for the courser-grained stuff, and then down at the operational level by others. But without the leadership at the highest level, that finer-grained stuff that happens as we operationalise, it just doesn’t transpire.

So, we have a situation where the United Nations had to say, “Look, we’ve got money. All you need to do is ask.” We’ve got the World Food Programme, who have millions of dollars’ worth of goods available to us, who have yet to receive a response, just an acknowledgement to their offer of support. I know for a fact that the people in DFAT and the ADF are more than willing to do significantly more than they already are, and it is quite a bit.

And so, we have this perverse situation where you’re seeing more relief flights from defence forces going to Fiji, which is less damaged with a smaller sort of affected population. They’ve got more flights going to Fiji than they have to Vanuatu, where we’ve got about 75,000-76,000 people who were severely affected by this cyclone, and about 100,000 overall who were affected.

It boggles the mind, but sadly, this is what happens when you have a vacuum of leadership at a critical juncture in that country’s history.

Rachel: I believe Vanuatu did accept $3.8 million from the UN. Is that correct?

Dan: Eventually, once a rather stroppy message was sent to say, “Guys, all you have to do ask.” But look, if we compare that to the scale of response that was required in the wake of Cyclone Pam, which admittedly affected a larger population, but was somewhat less severe in the worst-affected areas, we ended up requiring in excess of US$50 million in order to handle the relief and recovery periods over the first sort of three years or so.

The Australian government very kindly stumped up $35 million, I believe it was, in budget assistance immediately after Cyclone Pam, and that was crucial to maintaining our economy, just keeping the ball rolling as it were.

The reason I mentioned my own family’s experience is because we are one of thousands of families that are facing similar circumstances and similar challenges. If I thought it was just me, I wouldn’t say it, but because I know that this is the general experience, I think it’s grounds for concern.

I think that if we don’t recognise the scope of the problem then we won’t address it and we will see the death toll rising.

Rachel: Are you optimistic at all that the scope of the problem will be recognised in the short term?

Dan: As things stand currently, I think some people know what needs to be done in order to rectify the biggest problems here, and like I say, it’s mostly a lack of leadership and coordination. Whether the will to change that is present within the current government remains to be seen. I haven’t seen any indication yet.

Listen to the full Good Will Hunters podcast with Dan McGarry and Odo Tevi, ‘What will cyclone Harold, COVID-19 and a new PM mean to Vanuatu?’ here.