Support for ODA and donations to NGOs (previous paper replaced)

In 2014, Alexandra Humphrey Cifuentes, Jonathan Pryke and I published the Devpolicy Discussion Paper, “Putting our money where our mouths are? Donations to NGOs and support for ODA in Australia”. The paper compared 2012 data from the ACFID Electorate Snapshot Survey of donations to aid NGOs, 2013 Vote Compass data on public opinions about ODA, election results and 2011 census data. Earlier this year I was advised of probable issues with source data that we had drawn on for the paper.

Accordingly, I started data-gathering anew, combining new 2015 ACFID Electorate Snapshot Survey data on aid NGO donations, 2016 Vote Compass data on public opinion about aid, and 2011 Census Data. As I did this, I was able to get much better data thanks to the active assistance of ACFID as well as the Campaign for Australian Aid (the Campaign partnered with us to purchase the Vote Compass data in an improved format). With a new dataset, I re-analysed the data, and Alexandra, Jono and I have just published a new version of our original paper.

Because of the data concerns with the original paper, we’ve chosen to retract the 2014 paper and replace it with our 2016 analysis. The new paper can be downloaded here. (All Devpolicy papers are available from this page.)

Support for ODA versus share of population donating to aid NGOs 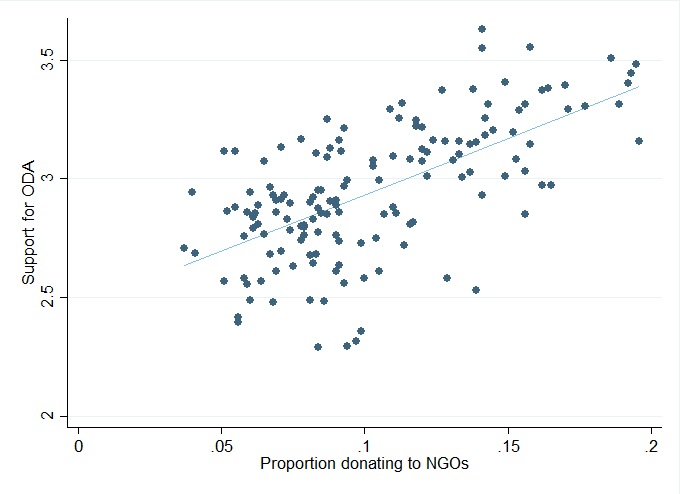 The bottom two charts are identical except that they plot results predicted on the basis of support for Labor. 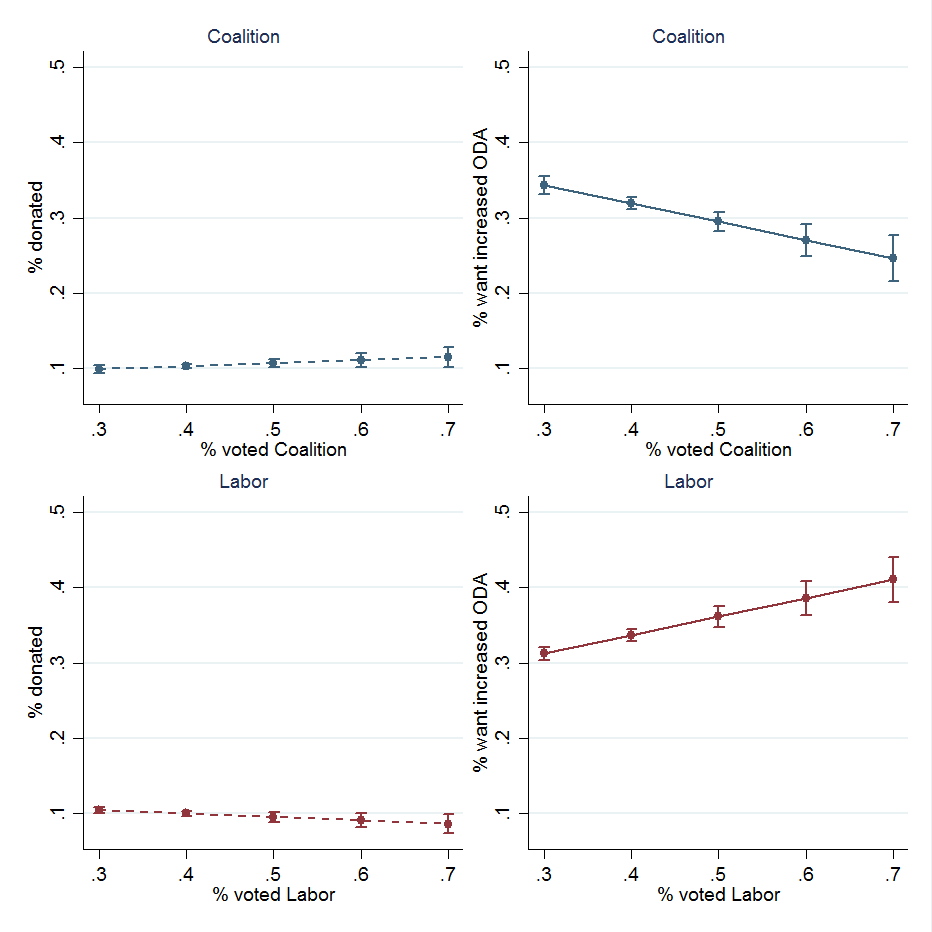 As you can see, the donations line slopes upwards for the Coalition and downwards for Labor. On the other hand, the ODA line slopes upwards for Labor but downwards for the Coalition. Also obvious is that the party effects on ODA are much larger than they are on donations. Electorates with more Labor voters may a have a few less NGO donors, but they have many more ODA supporters. Electorates with more Coalition voters may a have a few more NGO donors, but this is more than offset by a decrease in ODA supporters.

For (much) more detail have a look at the paper. Thanks to the help of our civil society partners, we think the 2016 version of the paper is a big improvement on the 2014 version. There’s still more we’d like to do to further advance research in this area. This will require additional years of data though. For now, the findings you’ll read in the new paper reflect the state of our knowledge.