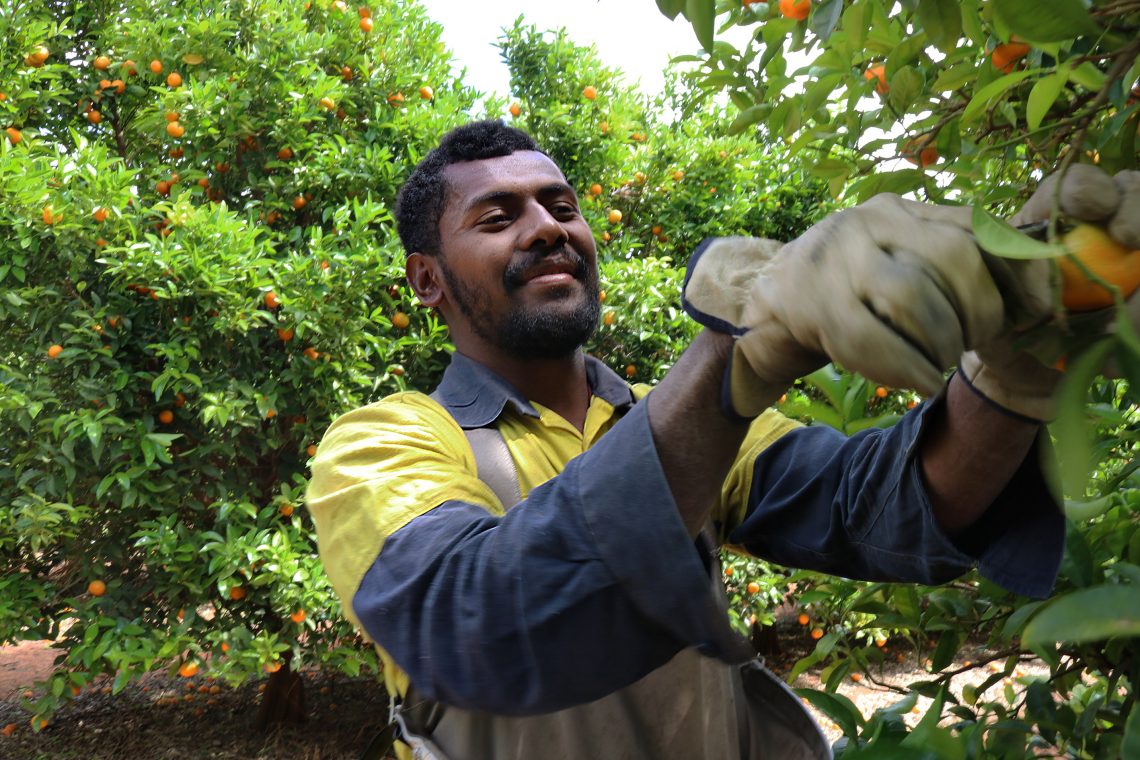 Participant in the Seasonal Worker Programme (Credit: DFAT/Flickr CC BY 2.0)

SWP and Approved Employers: time for a high-level dialogue

The need for government to give attention to the situation of seasonal workers has been highlighted in two earlier Devpolicy blogs here and here. This blog focuses on the problems Approved Employers in the Seasonal Worker Programme (SWP) are facing in coping with the current extraordinary situation of the COVID-19 pandemic.

Visa approval statistics show that at the end of January 2020 there were 6,781 SWP workers in Australia. Approved Employers have primary responsibility for these workers but believe they have little say in working out the best options for their workers. Although there are media reports of Australians seeking work on farms, the SWP labour hire companies I have talked to report that many growers have contacted them about supplying workers. So, the demand for labour is there, but my discussions with Approved Employers also revealed several problems in the SWP that need to be addressed.

First, Approved Employers face the problem of SWP workers’ 403 visas expiring because they cannot return home due to lack of flights. The obvious solution is to extend existing visas. The New Zealand government has already done this, automatically extending to late September all temporary visas due to expire between 1 April and 9 July 2020. Instead, the Australian immigration authorities have decided to grant a bridging visa upon application to those whose visas are about to expire, pending a decision on a new visa application.

Although bridging visas can have work rights, will workers be tied to an Approved Employer as a condition of their visa?  If not, they would no longer be SWP workers but could seek work with any employer. In this case, the workers’ rights under the SWP would also expire under the bridging visa. For example, their employer would no longer be obliged to provide them with accommodation. As well as allowing workers to apply for bridging visas, SWP workers’ 403 visas should simply be extended for a set period.

Second, much more flexible, alternative accommodation arrangements are needed. Additional room is needed to enable workers to be placed in isolation. And more space is needed for existing workers to reduce the risk of contracting COVID-19 by maintaining better social distancing. The current SWP process for approving accommodation arrangements is inflexible and includes many minor or petty changes such as replacing missing curtain rings. SWP approval is also drawn out because it is managed from a distance in Canberra.

The third problem Approved Employers face is that the SWP has stopped processing recruitment plans until the current travel bans are lifted. Putting the recruitment plans on hold will cause major delays in getting SWP workers back for the next season, when borders are reopened. This is due to the time the SWP takes to approve such plans and the need for further labour market testing. Backpackers have been locked out and when international travel resumes, their numbers may be much lower. SWP workers will be needed to fill the gap.

Unlike New Zealand, Australia does not have local area data collection directly from growers to identify the potential demand for seasonal workers in horticulture. So local intelligence, based on the assessment of growers that are asking for workers, is needed in the form of recruitment plans. If Approved Employers are willing to take the risk, recruitment plans should continue to be processed. Overall, consistent with the rhetoric of the prime minister, the aim should be to allow farmers to recover as quickly as possible post-shutdown.

Fourth, Approved Employers who are labour hire companies have the scope to redeploy workers to meet the need for labour on other farms in the same area or interstate. These moves will of course require two weeks isolation for anyone crossing state boundaries declared closed. A contingency fund needs to be set up to cover these expenses. One proposal is for Approved Employers to cover half of the costs of accommodating workers during this period, using the funds to ensure, among other things, that workers have nutritious food to keep up their immunity level.

The New Zealand government requires the employers of Recognised Seasonal Employer (RSE) scheme workers, who have to isolate for 14 days, to provide appropriate accommodation and pastoral care facilities. Costs incurred during any self-isolation period, including accommodation and living costs, are the responsibility of the worker, as during the normal course of employment. However, RSE workers are eligible for the sick-leave scheme, part of the government’s COVID-19 Economic Response Package. Employers are required to apply for the subsidy of NZ$585.50 per worker per week.

Fifth, much better, two-way communication channels need to be set up to seek the suggestions of Approved Employers and to replace the top-down SWP guidelines that were clearly intended for a very different operating environment. Sending-country liaison officers need a central point of contact to enable them to get accurate and up-to-date information to counter the panic messages generated by social media. This information needs to be in the language that workers can understand easily.

The rigidity of the SWP compared with New Zealand’s RSE scheme has been noted in the past here and here. This rigidity stands in stark contrast to the minimal regulation of backpackers and international students. Now is the time to develop a more flexible set of arrangements through learning by doing, based on close consultation with and involvement of Approved Employers.

Australia’s SWP has suffered, I have long argued, from the lack of a strong voice for employers. Now they have the AEA. The current crisis represents the perfect opportunity for the AEA to come of age, and for the Australian government to enter into a high-level dialogue with the AEA to deliver the required outcomes. The aim should be to better meet the needs of growers to ensure a reliable supply of fresh food for Australia’s population and to protect the health and livelihoods of the seasonal workers.