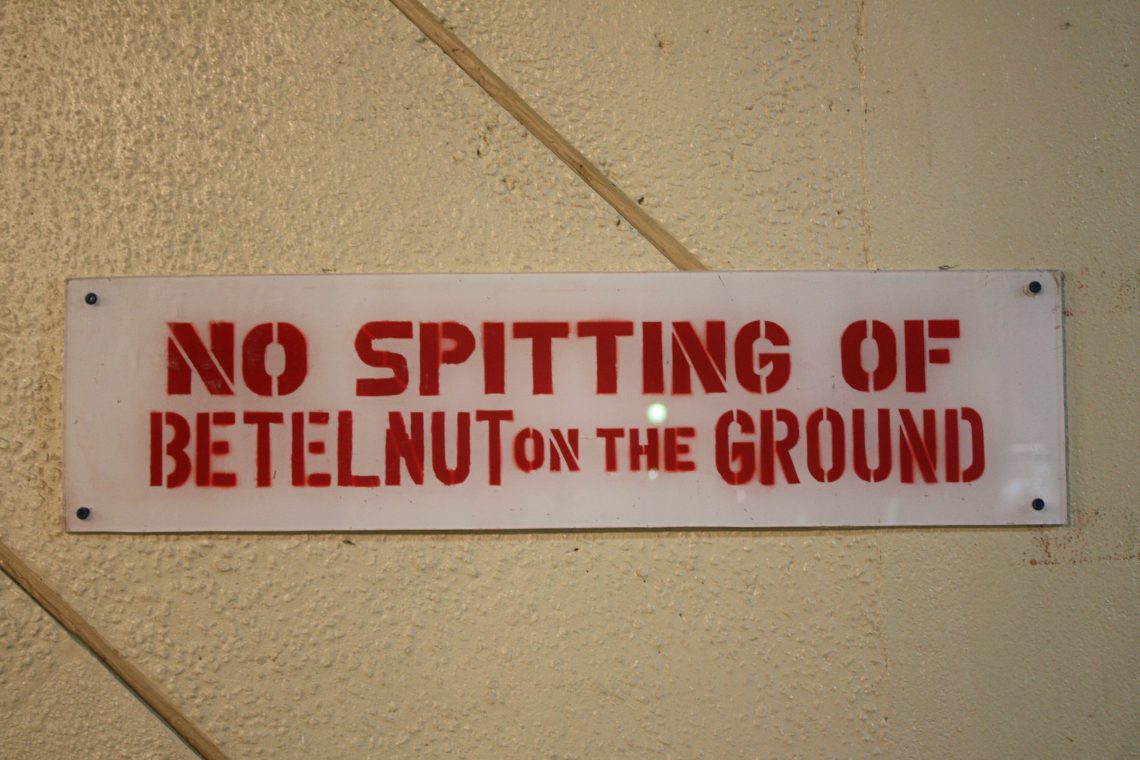 Addressing betel nut littering in Port Moresby has been a challenging task for Papua New Guinea’s National Capital District Commission (NCDC). NCDC has attempted bureaucratic and community solutions but neither has fully addressed the issue.

Bureaucratic solutions, “rely on laws in which people do things because someone further up the line has directed them to do so. In this case parliament passes a law and the police commissioner directs police to apprehend and prosecute the offenders” (Colebatch & Larmour 1993, p. 20). In 2013, NCDC passed the Buai Ban Act to address betel nut littering. The Buai Ban Act 2013 basically restricts selling and chewing of betel nut within Port Moresby.

Despite this Act, people continue to sell, chew and spit in public places. One might ask why does the public not comply with government policy?

There are two sides. One is the implementing agency and the other is the target group or people. For the implementing agency, police has limited personnel and capacity. They are more concerned about dealing with other, more pressing issues such as stealing, murder and sexual abuse. Another reason is that the Act does not clearly state how the offenders should be dealt with. Most of the perpetrators were beaten up and others were forced to pay fines, while others were left free.

On the other side of the issue, betel nut is a major source of income for most of the unemployed city residents. When introducing the 2013 Buai Ban Act, NCDC did not create any substitute economic activities. So the vendors continue to sell betel nut. Also, NCDC did not establish a proper clean-up team to be responsible for placing trash bins in public places and emptying them when they are filled so the littering cycle continued. The focus was on the result rather than the means to achieve the result.

Since enforcement of the Buai Ban Act 2013 was confronted with so many challenges, some individuals began to advocate for a community solution. Glenda Awikiak is one of the advocates. She argues that all stakeholders, government agencies, betel nut vendors and growers, and bus owners, should be able to work together to tackle the issue of betel nut spittle and rubbish. Following such advocacy, NCDC started to affiliate with other organizations such as Internal Revenue Commission (IRC), The Voice Inc. and a few church groups to promote the cleanliness of the city by developing various projects such as erecting bill boards, carrying out cleaning activities, and conducting awareness campaigns through the annual work for life. However, these community driven solutions have also done little to address the problem, as buai littering remains a big problem for the capital city.

With bureaucratic and community solutions failing to fully address the problem, perhaps we should think of market driven solutions – incentivising action via monetary incentives. Gorethy Kenneth is an advocate for a market solution, based on research into market demand for betel nut in Asia and Europe. According to Kenneth, betel nut skin has myriad uses in Asia and Europe and betel nut produces the best red fabric die in Asia and has market in Europe too. Kenneth proposed that PNG should export betel nut to those places, which is currently not possible due to PNG government restrictions.

If the betel nut could be exported, its price would rise. Reduced consumption of betel nut in the city would lead to reduced betel nut littering.

The issue of betel nut littering is cross-cutting, socioeconomic in nature and is deeply rooted in PNG culture. No single mechanism, such as a ban, will fully address the issue. One might assume that simultaneous application of bureaucratic, community, and market solutions would address the issue. Experimentation is needed to find effective methods that will ensure public compliance.

Raphael Yanka was a participant in the 2019 ANU-UPNG Summer School at Crawford School of Public Policy, supported by the PNG-Australia Partnership. This blog is based on his research undertaken for the Comparative Public Sector Management course. The author wishes to thank the course coordinator, Nematullah Bizhan for his thoughtful suggestions and critiques on the earlier versions of this blog.

Raphael Yanka
Raphael Yanka is a fourth year undergraduate student at the School of Business and Public Policy, University of Papua New Guinea.